A Lesson in Knife Skills—and Mindfulness 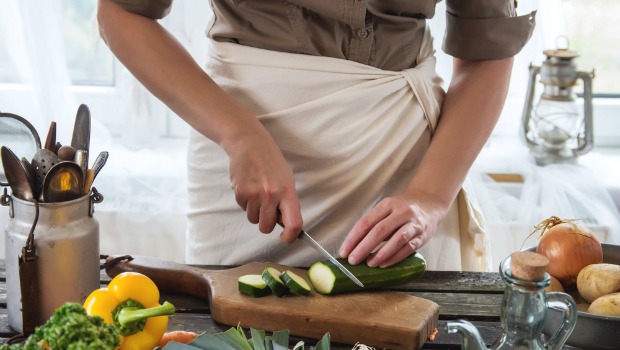 When Elisha Goldstein, Ph.D., co-founder of Los Angeles’ The Center for Mindful Living, told me about an upcoming class called “Cooking with Compassion” that promised to teach all levels of home cooks how to slice, dice, chop and chiffonade with ease, I signed up right away. The class description promised to combine technique with mindfulness: “the complete experience of cooking … igniting our senses and bringing the power of the present moment into the process.”

The class was led by Meredith Klein, a private chef and meditation teacher. Meredith had been pursuing a doctorate in sociology in 2007 when she attended the Burning Man festival in the Nevada desert. There, she experienced a kind of (get ready for the cliché) spiritual awakening that made her decide to “be open to receive food prepared with love.” She then dropped out of graduate school to study with Zen chef and monk Edward Espe Brown, author of the revered Tassajara Bread Book and subject of the documentary How to Cook Your Life.

Meredith began the class by leading the dozen or so students in a group meditation and then went on to explain the intersection of mindfulness and knife skills. “The kitchen is the perfect place to practice mindfulness on days when getting on the meditation cushion is impossible,” she said. “And mindfulness isn’t just about being on the cushion, after all. It’s about how you bring that consciousness into real life.”

Cooking is an active working meditation, according to Meredith. “As Brown says in How to Cook Your Life,” she continued, “what we do in the kitchen is how we live our lives. If you’re taking shortcuts in the kitchen you’re probably taking shortcuts in other parts of your life, too. So, when you cook, you can practice a different way of being. Knife skills are so elementally mindful—to practice them well requires presence and attentiveness—it’s the perfect experience of beginner’s mind.” 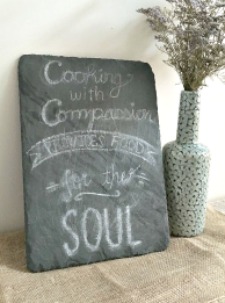 For the next three hours, sometimes in silence, we practiced our knife skills on a wide assortment of vegetables and herbs.

Here is a little of what I learned:

Know how to handle your knife

For a secure grip, you’ll want to grasp the handle firmly and pinch the bottom end of the blade with your thumb and forefinger. (Like me, you might need to correct your habit of extending your forefinger along the top of the blade; this gives you less control.)

When you approach a vegetable, ask yourself, “What parts do I not want to use?” Your first cut should be to eliminate those parts, like the hairy root end of an onion, or the top of a bell pepper. But instead of throwing that part away, think about how you can reuse it. Stash all your veggie scraps and use them in a compost pile that will eventually power your garden. Or you can store those scraps in the freezer and use them to make vegetable stock. (Here’s a guide on how to make stock without a recipe.)

While we worked, Meredith’s helpers were turning our output into soup. We felt like old friends by the time we gathered around a communal table to enjoy two different soups: butternut squash, Fuji apple and chipotle and miso soup with vegetables and almonds.

We began the meal with a moment of silence and then went around the table to talk about what we had learned. Several people had been on meditation retreats with Meredith and saw the class as an extension of that mindfulness experience. I was touched by how connected I felt to everyone after just a few hours of cooking and eating.

And, as a bonus, I now feel I have the skills to tackle a veggie hash. My local farmer’s market is tomorrow and I’ll be heading there to gather carrots and celery, parsnips and beets. I will enter my kitchen with beginner’s mind, shake hands with my Wusthof chef’s knife and with presence and mindfulness chop everything into a ½-inch dice.

Shelley Levitt is an editor at large for Live Happy.