A Visit With Pope Francis

Why do we feel overcome with emotion when we see a spiritual leader such as Pope Francis or the Dalai Lama in person? The answer lies in the science of elevation. 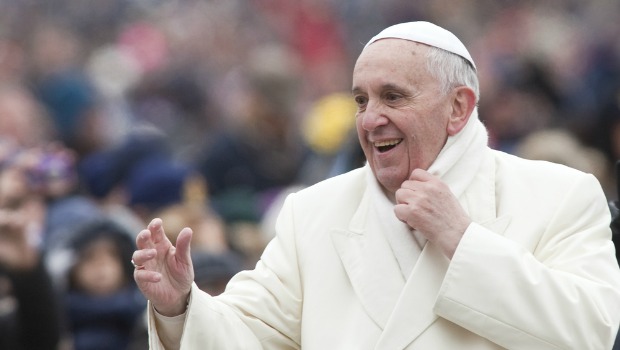 Walking slowly, elbow-to-elbow with thousands down the Parkway in Philadelphia to make our way to an outdoor Mass with Pope Francis during his September visit, I could barely see in front of me. My eyes welled with tears at the profound sense of connection and joy I had walking with hundreds of thousands of pilgrims from across the world. 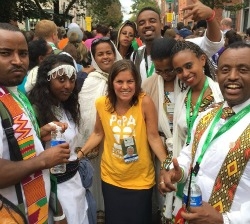 My companions came as far away as Ethiopia, Mexico and China. And though we had been mere strangers moments ago, the power of the common experience—which also made me feel closer with my own family—soon made them feel like cherished friends.

I feel incredibly blessed to have attended all three public events of Pope Francis during his weekend visit to Philadelphia. Each time, joyful tears trickled down my face when I saw him, listened to his words, and watched him graciously interact with the crowd. Many responded similarly and appeared deeply moved as well.

What exactly was going on?

Jonathan Haidt, social psychologist at NYU and author of The Happiness Hypothesis, would say we were experiencing “elevation,” which he defines as “an emotional response to witnessing moral beauty in others.” “When people see acts of moral beauty—things like generosity, loyalty, courage—they have emotional feelings, often become choked up, and cry,” he says.

Further, Jonathan found that people report feeling motivated to be more virtuous—a better version of themselves when they are in the midst of feeling elevated. Indeed, when I was seeing the pope, I noticed the crowd was incredibly peaceful and that we all seemed to be versions of our best selves, whether it was sharing our sandwich with a stranger, helping to lift a stroller or wheelchair over a street blockade or thoughtfully giving away water bottles to the crowd.

Listen to our podcast with Jonathan Haidt

Along with thousands of others, I watched Pope Francis ride in the open-air popemobile, reach out to bless people, kiss babies and comfort the sick. In addition, mesmerizing media images of the pope meeting with the homeless, washing the feet of prisoners and hugging the outcasts of society abounded during the weekend he was here, capturing his boundless kindness and humility. 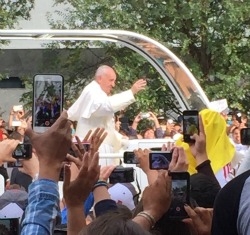 Despite Pope Francis’s “rock-star” status, the feeling at these events differed starkly from the rock concerts I flocked to in my youth. The hyper-frenetic energy common at concerts, which often results in injuries from moshing and mad dashes to the stage, was nonexistent. Instead, the palpable papal enthusiasm was tempered and internally uplifting—the kind that doesn’t cause you to jump up and down in a frenzy but rather hold your loved ones close.

At one point, as I ran after the popemobile in an attempt to snap a close-up picture, I recall thinking that I could easily be trampled by the enormous crowd. However, it was just the opposite. Someone accidentally grazed my arm, immediately apologized, and checked to make sure I was OK.

The response of the crowd can, again, be explained by the science of moral emotions. “Elevation gives feelings of warmth and love and involves oxytocin, which is a sedative bond,” says Jonathan. It makes people feel calm, rather than causing them to spring to action. However, people often confuse elevation with elation. 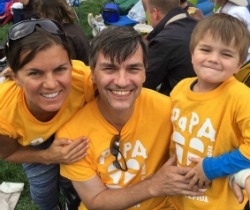 Some people think of happiness as an exuberant, jumping-up-and down feeling and others see it more as a serene and blissful state. While neither notion of happiness is wrong, and both types of emotions feel good in the moment, they are very different. I found that elation appears to be somewhat superficial and fleeting whereas elevation deeper and longer lasting.

While jumping for joy (as I have done at countless concerts) in a pure state of elation provides momentary pleasure, I’ll opt for holding my loved ones close as we get to see one of the world’s great spiritual leaders any day of the week.

Listen to our podcast with Suzann and James Pawelski.

Suzann Pileggi Pawelski is a Live Happy contributing editor specializing in the science of well-being.