Gaze deeply into the eyes of your beloved pup, and within 10 minutes both of you are cruising down happy street. 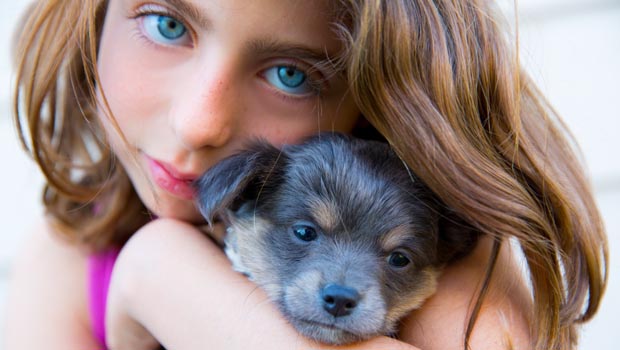 Walking with her dog Laurel along the frosted mountain trail as it curves through the Vermont woods, massage therapist Jody Higgs signals the dog to “come” and “wait.”

Still a puppy at 10 months—but, at 90-something glorious pounds, close to her mature weight—Laurel lopes happily to Jody’s side, stands at the tips of her hiking boots and looks up expectantly. This is a training run, and Laurel knows it.

Laurel lies down and for 10 minutes the two quietly listen to the ravens overhead, the occasional crack of an old tree branch, and the rustle of frosted leaves as a small woodland creature moves around outside its burrow.

“It’s almost like a standing meditation for me,” says Jody later as the three of us meet along a backcountry road near the trailhead. “Dogs intensify our connection to nature.” They notice everything, and draw our attention to the small sounds, earthy scents and transient creatures we might otherwise miss.

As if to prove Jody’s words, Laurel, now on a lead, dances along the road’s edge, sniffing everything and looks for a tree stump on which she can gnaw— probably to test her new molars.

“She also gets me out of bed in the morning,” adds Jody, as the dog pushes her curious nose under a juniper. “When I wake up, I’m sort of grumpy and pessimistic, and I don’t think clearly. Then Laurel and I go for a walk.”

Jody shrugs, a little embarrassed, and offers a grin. “I don’t know what it is,” she adds, “but when I get back, it feels like I can deal with things. Things are clearer. And I’m in a better mood.”

Clearly Laurel’s magic. But she does far more than just connect Jody to nature or get her up in the morning. As Rebecca Johnson, Ph.D., director of the University of Missouri’s Research Center for Human-Animal Interaction points out, researchers have discovered that the interaction between dogs and their humans triggers a series of chemical changes that increase our sense of wellbeing.

In fact, several studies have revealed that within 10 minutes of gazing deeply into a dog’s eyes or petting a sweet little bundle of fur, there are neurochemical changes in the brain. “We get a burst of oxytocin, prolactin, dopamine and endorphins,” explains Rebecca, “which are all chemicals that help us feel happy and allow us to relax.”

It’s actually something of a neurochemical free-for-all for both dog and human—and it makes your dog as happy as it does you. And it’s good for your health. In fact, some studies suggest that living with a dog reduces the symptoms and severity of clinical depression, while others have found that it boosts your immune system, reduces blood pressure and lowers your heart rate.

The effect is so powerful that the chief cardiologist at one British hospital literally prescribes a dog for men who have just had a heart attack. And he’s found that the chances of a second heart attack in these men are cut by a whopping 400 percent.

Dogs also help you maintain an active lifestyle and a healthy weight, adds Rebecca, who co-wrote the book Walk a Hound, Lose a Pound. Which is something Jody Higgs can verify. “I’m getting way more exercise than I was before I got Laurel,” says the trim Vermont woman. “I used to walk once a week, but now I walk for at least an hour every morning.”

For you and your dog to enjoy a life that brings each of you love, joy and a steady diet of happiness, you need to begin building a lifelong bond on the day that you bring your dog home. Here’s how to do it:

Give daily belly rubs. If you have four feet and a furry undercarriage, nothing brings more pleasure than to roll over on your back and have your human gently rub your chest and belly. It’s an excellent way to start the day, and you feel nothing but love for the human who understands that important fact.

Build trust. Meet your dog’s needs, says dog trainer Deb Helfrich, director of training and certification for Therapy Dogs of Vermont and founder of GoldStar Dog Training in Stowe and Fairfax. A dog that’s regularly fed, stroked, groomed, played with, and walked will learn to trust you.

Learn to speak dog. Study your dog so you know how he or she shows fear, happiness, sadness, excitement, anxiety—the full range of emotions. If you’re not sure what you’re seeing, says Deb, check out doggonesafe.com and learn the signs. You can also sign up for an online course that helps you figure out appropriate responses, or you can get tips from a local trainer. Go to apdt.com for a listing of trainers in your area.

Learn together. Obedience training, agility training, freestyle dog dancing, therapy dog training—whatever it is that the two of you learn together will, as you steadily work together, set the foundation for a lifelong relationship.

Play together. Grab an old sock for tug-of-war, bounce a tennis ball off the house, hurl a Frisbee across the yard. Help your dog explore his interests with one-on-one attention. No puppy cousins or human brothers allowed. Just the two of you doing something that makes you both feel good.

Never use physical punishment. Ever.

Walk. Just as that walk around the block after dinner settles you down after a hectic day and lifts your mood, it does the same for your dog, says Rebecca. Shared together every day, it sets the tone for a feel-good relationship.

Work through challenges together. When Rebecca adopted Madison, an English setter rescue, the dog came with a lot of little issues, plus an inclination toward aggression. Rebecca enrolled her in 16 weeks of private obedience work, which helped the dog become obedient but didn’t affect the aggression. But Rebecca kept trying. And after working with Madison through several approaches, she eventually found a trainer who was able to reach the dog. Madison became a different dog, and she found her place in the family. And the bond she and Rebecca built as those challenges were confronted is the foundation of a solid relationship today.

ELLEN MICHAUD, Editor at Large for Live Happy magazine, is an award-winning writer who lives high in the mountains of Vermont. She has written for The New York Times, Washington Post, Better Homes and Gardens, Readers’ Digest, Ladies Home Journal and Prevention Magazine. Her book A Master Class: Sensational Recipes from the Chefs of the New England Culinary Institute and Ellen Michaud was named one of the top ten cookbooks of the year by NPR.