For our fabulous October cover shoot, Live Happy editor at large Shelley Levitt got a taste of what it’s like to hang out with “black-ish” star and all-around fun guy Anthony Anderson. 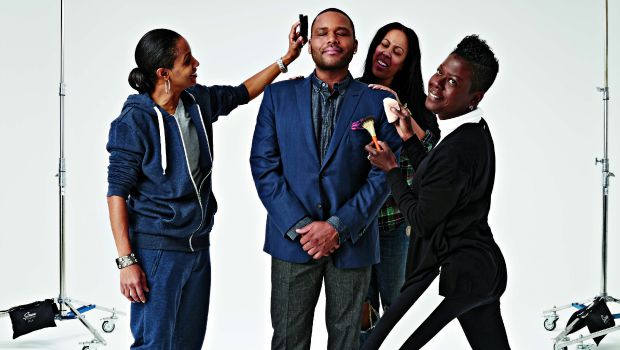 Toss Anthony Anderson a softball as we did at the cover shoot for the new issue of Live Happy and he turns it into a story. Assuming a pitcher’s stance he pantomimes a conversation with a catcher; eyes locked on his imaginary teammate, he shakes his head a few times, declining the pitch, then finally nods and gives the ball a gentle toss. Too gentle for his taste. “I look like a punk,” he says with mock disgust. “I need to throw an effing curveball.” 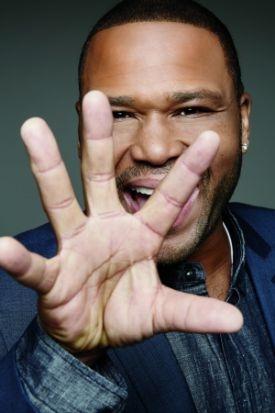 The crew in the Hollywood photo studio cracks up, and it’s far from the last time Anthony will leave them in stitches. Later, when he and Victor, a crew member, lean against each other back to back for a shot, Anthony sings, “He ain’t heavy. He’s my brother,” and then plants a kiss on Victor’s neck. (The two met each other on a previous photo shoot and “we just hit it off,” Victor says.)  And when Victor staggers a bit, Anthony reproaches him playfully, “Hey, I’ve lost weight! It should be easy to hold me up.”

Anthony is indeed lighter than he’s been in years, having shed some 50 pounds since the summer of 2014. Sticking with his new regimen of eating several small meals a day, he sits down to a plate filled with greens and whole grains before the shot begins and a couple of hours later, before the interview, he requests a second meal, this one salad and grilled chicken. As he eats, he eagerly shares the details of his strenuous workout routine.

Before he leaves the studio, Anthony will graciously autograph a half-dozen softballs for the Live Happy team and dispense bear hugs all around. When I recount this to Kenya Barris, the creator of Anthony’s hit sitcom black-ish, he’s not surprised. “Anthony is the ultimate host,” Kenya says. “He wants to make sure everyone is fed, everyone is having a good time.”

A few weeks after our shoot, the Emmy nominations are announced and Anthony earns a nod for Outstanding Lead Actor in a Comedy Series. He goes on Twitter to share his joy with his more than 350,000 followers. “Today I’m truly humbled by my Emmy nomination. Hard work, sacrifice and faith pay off! And a talented writing team headed by [a reference to Kenya] @funnyblackdude.”

To read more about Anthony Anderson, see the feature story in the October issue of Live Happy magazine, on newsstands September 1.

Shelley Levitt is a freelance journalist based in Los Angeles and an editor at large for Live Happy.