Murals become a social movement to remind us to be kinder, live better. 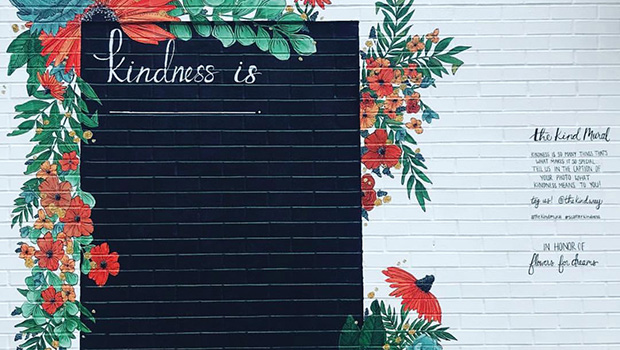 Murals become a social movement to remind us to be kinder, live better.

Kindness has always kind of been Rebekah Rinehart’s “thing,” but in 2016, she decided to expand her mission. In a world that seemed increasingly unkind, she wanted to challenge others to return to a kinder mindset and share its benefits widely.

“I wanted to do something that would reach the masses and could really touch the hearts of a lot of people,” she says. “There were already T-shirts and bracelets and great things like that out to remind people to speak out about kindness, so I was looking for something different to do that would really stand out.”

Then one day she woke up with the idea she knew was the answer she was looking for: “I decided to do a mural; I thought it would be a great way to be able to share it on social media. But then I realized I can’t paint.”

Although she didn’t have the artistic skills, what she did have was a sorority sister who was not only a talented artist, but also “embodied everything about kindness.” Rebekah reached out to Sarah Gail Nelson, explained what she wanted to do and Sarah reluctantly signed on.

“She was hesitant at first just because she’d never done a mural,” Rebekah says. “We had nothing to show people and had never done anything like this, but we knew we wanted to go big or go home.”

One of the biggest challenges Rebekah and Sarah faced was coming up with an image that illustrated what kindness is all about. They wanted it to be interactive and encourage others to share their thoughts on kindness, but couldn’t quite decide what images best would do that. After months of pushing ideas back and forth, they decided they would let people viewing the mural decide what kindness means.

“Kindness is so many things; it can be funny, it can be serious, it can be joyful,” Rebekah says. “So finally we decided to let them fill in the blank.”

They became an LLC, The Kind Way, and began painting their first kindness mural in October 2017 in Nashville’s historic Germantown neighborhood, a popular spot for locals and tourists alike. The mural features flowers surrounding the state of Tennessee with the words “Kindness is _____________” in the middle. Beside that super-size image, Rebekah and Sarah ask passers-by to take a photo and share through Instagram what kindness means to them.

“We learned so much doing that first mural,” Rebekah says, recalling that they had “zero expectations” and didn’t know how people would respond to it. But even as they were painting it, people stopped to ask questions and, as soon as it was finished, they began receiving photos and responses from people who had taken their photos by the mural.

From a Mural to a Movement

After Nashville, they painted “The Kind Mural” in Chicago and then went to Sioux Falls, South Dakota, for their third installment. Next, they’ll paint a mural in Dallas over Labor Day weekend and have other locations in their sights. So far they have either lived in or visited each of their locations. However, they’re also inviting anyone interested in bringing a mural to their city to contact them at thekindwayoflife@gmail.com.

“The fact is, this is not only a mural, but a social movement to remind people of the importance of kindness,” Rebekah says. “We absolutely adore seeing all the tags on our social platforms from people across the globe. Their unique perspective of kindness reminds us how different and special kindness truly is.”

In addition to the mural itself, each site contains a tribute to a person or organization that embodies the spirit of kindness.  Rebekah says they’re doing that because they want to give back to each community, but don’t yet have finances to make a donation. Instead, they pay tribute to a person, place or organization that fits the kindness theme.

“We hope that kindness becomes a pillar and a constant in our lives and the lives of others,” Rebekah says. “Oftentimes, kindness is perceived as elementary or weakness, but it should not and does not have to be that way. We all have a voice; let’s use it to make the world a better, kinder place.”

Celebrate Be Kind to Humankind week August 25 to 31with the hashtags #thekindmural and #bk2hk.

Next, Rebekah and Sarah are working on a children’s book that will further spread the kindness message, and their website, thekindwayoflife.com, will go live at the end of September. Rebekah says that the message of kindness is timeless, but right now it’s also very timely.

“Kindness can and will make all the difference in our lives, but you have to decide how and when that happens,” she says. “Kindness brings joy. It challenges our hearts to be better to one another and, ultimately, to ourselves. It is a way of life.”

Explore The Kind Way’s journey on Instagram at @thekindway and #thekindmural. And watch the first mural come together in this fun video.