Cincinnati Does the Happy Dance 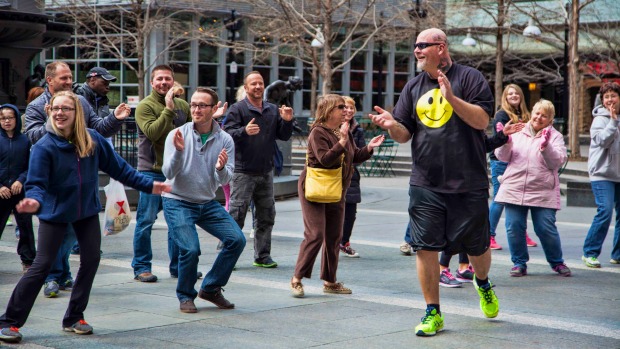 “With all the negativity in the world today, I think people need a little positivity, and that’s what I’m trying to bring to downtown Cincinnati – a little more happiness,” he said. “I’m a big fan of Pharrell Williams, and that song is so contagious – I think it touches everybody.”

After a quick review of the dance moves – in temperatures struggling to reach the low 40s – the impromptu dance troupe enthusiastically took over the square and showed off their moves. Some were students of John’s who had come specifically to join in the dance; others were passers-by who couldn’t resist joining in.

The line dance borrowed some moves from Pharrell’s video for the song, and John led the dancers while wearing a black t-shirt adorned by a bright yellow smiley face. His towering 6-foot 7-inch frame was as impossible to overlook as the neon yellow tennis shoes on his feet and the grin on his face. As a crowd of curious onlookers grew, it was impossible to tell who had the biggest smiles: the dancers or the spectators.

“How many people are happy here today?” John shouted as the song came to a close. The cheers, whistles and clapping indicated the feeling was universal. 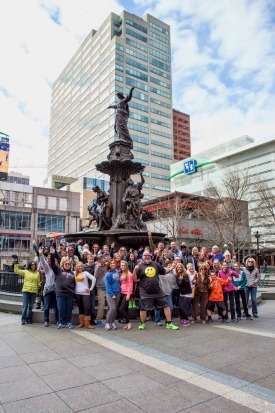 John had a friend on hand to videotape the event, and he plans to send it to Pharrell’s camp. “Hopefully he gets to see it, and knows what a difference he’s making,” John says. “I’m just joining the campaign that he’s on – to make people a little happier.”

John’s wife, Lori, joined in the dance and says she wasn’t surprised by his idea to make a dance video of the song.

“Originally, he was going to do it solo, and dance by himself in front of the fountain,” she says. “But I said, ‘Let’s get the word out and get Cincinnati involved’ – and it worked! We didn’t know how many people would come out, but we had a great turnout. There are a lot of happy people in Cincinnati.”

And, by the time they were finished, there were even more.