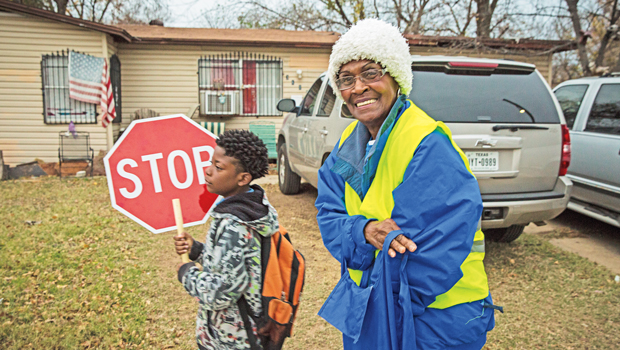 “I always have a good day on Wednesdays,” says 12-year-old Albert Carter. The reason? That’s when he participates in his school’s walking school bus.

Each week, a group of spirited senior citizens—including 66-year-old Jo Ann Washington and 80-year-old Bertha Barnes—along with other volunteers, chaperone about a dozen children on the 1-mile morning trek from East Berry Branch Library to Christene C. Moss Elementary School in Fort Worth, Texas.

“It’s important to walk because when you wake up in the morning, you feel all tired,” Albert says. “Walking loosens you up and wakes you up so then you can have energy to go to school and get passing grades.”

Eight-year-old Ja’liyah Williams puts it bluntly: “Driving to school is boring,” she says. “My favorite thing about the walking school bus is that everyone comes and we play together. We’re always singing.”

Volunteers don fluorescent yellow vests and teach the children safety rules along the way, adding to their brood as they go since some children are picked up in front of their homes.

“It gives me great joy working with them,” Jo Ann says. “I’m glad to be a part and just feel like a kid.”

Principal Charla Wright-Staten says she’s noticed a change in her students who walk to school. “They’re able to get some of their restlessness out and come in ready to work and learn,” she says. “They don’t know they’re establishing healthy lifestyles—we kind of sneak that in.”

In 1969, almost 50 percent of children in kindergarten through eighth grade walked or biked to school. By 2009, that number dropped to less than 13 percent. That’s why community leaders in Fort Worth and around the world are implementing walking school buses, which teach children lifetime fitness habits and reduce traffic at the same time.

The idea is simple: A group of children walk to school with two or more adults. Some schools partner with community groups, like how Christene C. Moss Elementary joined forces with Silver Sneakers, a fitness program for seniors offered by a local YMCA chapter. That’s how Bertha found out about the program.

“I like walking, and I like kids,” Bertha says. “All of my own kids are up and gone.”

In Fort Worth, 30 elementary schools have launched walking school buses as part of the Blue Zones Project, a well-being improvement initiative aimed at helping people lead longer lives by making healthy choices easier. Across the country, 42 communities in nine states have joined the Blue Zones Project, and walking school buses are common in those locations.

Take it from Ja’liyah: “Come walk and get used to it. Then when you grow up, you already know what to do.”

While the physical benefits are clear, Charla notes another significant impact the walking school bus has on her students. “They see it’s beyond just their parents, teachers and principal that care about them,” Charla says. “They’re seeing that there really is a village around them.”

Take Albert, who appreciates it when the adults listen to what he has to say. “I feel better when I’m walking because we talk about stuff, and I just think about that sometimes and that kind of boosts my day.”

But it’s not just the students who are benefiting: While Ja’liyah and Albert both say they’re learning to pay attention, listen and get better grades, Jo Ann points out that she’s learning from the kids as well.

“It was cold one morning, and I knew those babies weren’t going to come out and walk,” she says. “That particular day, there were even more of them. You talk about devoted.”

For Bertha, interacting with the children is leaving a lasting impression. “They’re teaching me how to be jolly and not worry about anything,” she says. While Bertha hopes she’s relaying the importance of morning exercise, there’s another lesson that’s not lost on the students.