New research shows that music with upbeat lyrics and a catchy harmony actually lights up the pleasure centers in our brains. No wonder we love rock and roll. 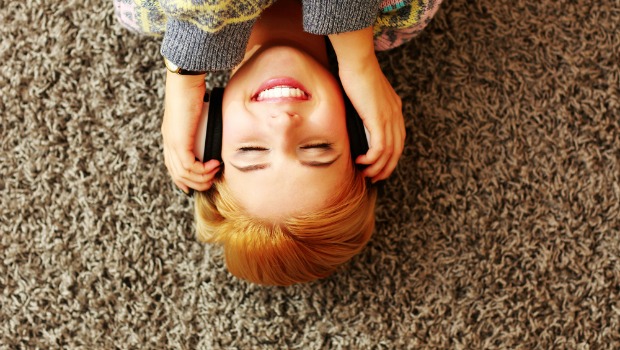 Science backs up what we already knew: Music can make us happy

For proof of how contagious music can be, we need look no further than Pharrell Williams’ current hit song, “Happy.” The upbeat, infectious track from the 2013 movie Despicable Me 2 (and the lead single from Pharrell’s 2014 album G I R L) has not only topped the charts and prompted millions of downloads in multiple countries, but also has spawned hundreds of tribute videos on YouTube. Everyone seems to be singing (and dancing) along; the “Happy” music is as contagious as its message.

The song’s effect is no fluke; studies show that our brains are hardwired to react to music. Brigham Young University psychology professor Ross Flom, Ph.D., found that babies as young as five months old reacted positively to happy, upbeat tunes; by nine months, they also responded to sad songs. And as our brains develop, the psychological effect of music only intensifies.

Today, doctors know that music provides much more than ear candy; it’s been used to boost patients’ immune systems following surgery, to lower blood pressure and heart rates in cardiac patients and to reduce stress in pregnant women. Cal State Sacramento researchers discovered that children are happier during music therapy than during play therapy, and music therapy also is a proven treatment for anxiety, depression and loneliness in the elderly.

So what is it about music that makes us so happy? For one, it’s the rhythm and tempo itself. Songs with a fast tempo written in a major key bring about physical changes that are associated with happiness, such as breathing faster. Neuroimaging studies show that, like language, music stimulates many areas of the brain and helps spark imagination.

Songs with lyrics fire up the part of the brain that processes language, while the visual cortex works on creating a visual image. Meanwhile, the motor cortex wants to get in on the act, too, and makes us start tapping our feet. The cerebellum ends up playing traffic cop, using previously heard songs as a way of trying to figure out where the music is going next; and the medial prefrontal cortex—our memory bank —is lighting up with nostalgia. In short, the pieces of our brain work together like a scientific symphony to decipher this music. And the result? Imaging studies show that it releases dopamine and gives us the same kind of pleasurable feeling we get from chocolate or sex.

That’s good news for people who need a quick boost of happiness. While more conventional methods of developing happiness – like practicing gratitude or exercising a signature character strength – are touted as ways to build long-term wellbeing, results from a pair of studies published last year in The Journal of Positive Psychology showed that listening to music could elevate happiness levels almost immediately.

Surprisingly, it’s not just those feel-good ditties that can boost your mood—Elton John had it right when he sang, “Sad Songs Say So Much.” A Japanese study published last year in Frontiers in Emotion Science found that people who listened to sad songs felt happier than expected when they listened to sad songs. One explanation? If we expect a song to make us feel sad, we actually feel happy when that expectation is met. So, in essence, it’s feeling sad that makes us happy – a complex emotional response that Ohio State University researcher and author David Huron calls “sweet anticipation.”

What’s more, researchers from the UK found that listeners who focus on the beauty of sad songs found it to be an effective way to alleviate sadness. Their study, which was published in the journal Psychology of Music, also found that people who listened to sad songs that they felt related to their own personal experiences actually felt happier afterwards. Tunes from the past, meanwhile, can create feelings of connectedness, which boosts self-esteem and leads to a happier more optimistic outlook, according to a recent study from the University of Southampton.

Studies show that, happy or sad, music can alter our mood and lift our sense of wellbeing. So go ahead: clap your hands, and check out our own Live Happy Playlist on Grooveshark.