Conductor Benjamin Zander inspires others to see their own creative possibilities. 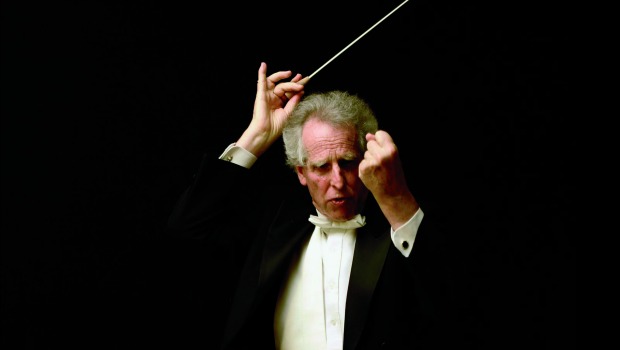 Master conductor Benjamin Zander inspires with his passion for music and infectious optimism.

Benjamin (Ben) Zander looks at the drop-off in listeners and drying up of public funding as an opportunity to be seized, which is pretty much the way the 77-year-old founder of the Boston Philharmonic Orchestra (BPO) views everything.

“I try to live life by the philosophy that you can reinvent any story so that it’s more exciting or energizing or happy-making,” Ben says. “It’s about possibility,” he clarifies, a theme he touches on frequently in his star turns on the lecture circuit, dispensing wisdom gleaned from his nearly 50 years of coaxing orchestral musicians to reach into their souls and produce heart-rending music. He has been a four-time keynote speaker at the World Economic Forum in Davos, Switzerland, and has addressed top brass at major companies like McKinsey and Pfizer as well as for the U.S. Army.

Ben’s success isn’t simply about talent or charisma, though he’s plenty charismatic. Instead, he uses novel leadership techniques that turn the traditional way of conducting on its head and give every member of the orchestra a voice, a stake in the outcome. That’s not an easy feat, since orchestral musicians are a notoriously grumpy lot (one famous Harvard study found that they rank just below prison guards in terms of career satisfaction), but Ben won’t stop until everyone around him is invested, or enrolled, as he puts it. “If the eyes of the people around you are shining, you know you’re connecting,” he says.

Firing on all cylinders

Ben is a master connector, as evidenced by his TED Talk—with 7,646,626 views and counting. He encourages not just his musicians but buttoned-up CEOs to access their emotions through music. 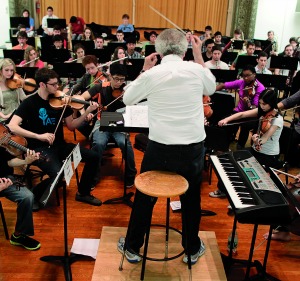 To demonstrate, he leaps up from the leather-tufted chair in his living room to his 9-foot Steinway grand, a gift from his late father, a Jewish survivor from Nazi-era Germany. As he pounds out a few rousing bars from Beethoven’s “Eroica” Symphony, he practically bounces off the piano bench. “See? It’s about joy!” he exclaims. “Could it be any clearer?”

Ben brims over with joy, though if you ask him how he stays so happy, he replies that happiness isn’t the whole story. “I say, ‘You’re happy? Good! What else you got?’ To me, it’s not just about being happy. It’s about full engagement, about firing on all cylinders, it’s about wow!” he explains, his body taut with a 25-year-old’s energy.

As founder and conductor of the BPO as well as the Boston Philharmonic Youth Orchestra, along with numerous guest conducting stints—“I’m traveling to Spain, England, Israel and Sweden, and that’s just in a month!” he says— Ben always seems to have room for one more commitment, one more connection in his schedule. How does he fit it all in?

“I tend to say ‘yes’ to everything,” he says, laughing, referring to a recent last-minute meeting with teenagers at Booker T. Washington High School in Tulsa, Oklahoma. After two students there learned that Ben was coming to the city for a concert, they wrote and invited him to speak. Ben shifted his packed calendar around to make it happen, hoping for 40 or 50 kids.

“Seven hundred students showed up! I had the time of my life!” he recounts, his own eyes shining beneath bushy white eyebrows.

Choosing to be happy

Yet happiness hasn’t always come easily to Ben, nor to his family. “Happiness is a discipline,” he says. “I wasn’t born with a sunny personality. I’m equally prone to moodiness, but at a certain point, I discovered that my mood was my choice. It wasn’t something I had to wait for, like a sunny day.”

As an example, Ben points to a small bust of his father, which rests atop the gleaming grand piano. His father came to England from Germany, and at the outbreak of World War II he was sent to an internment camp in England’s Isle of Man. “He lived with thousands of other refugees behind barbed wire,” Ben recounts.

At that point, the elder Zander had lost everything—his mother, who was exterminated in the Chelmno concentration camp, plus seven other family members along with his money, his profession (as a lawyer), his home, his culture. “Yet my father looked around and said, ‘There are many intelligent people here—let’s start a university!’ ” says Ben. “There were no blackboards but there were things to talk about, and soon they were doing 40 lectures a week, right there in the camp.”

You could say that this anecdote embodies Ben’s worldview. “It’s an example of how, if you are disciplined about it, you can look at anything as rich with possibility,” he says. Ben explores this principle in his best-selling book The Art of Possibility, which he co-authored with his former wife and collaborator, Rosamund “Roz” Stone Zander. The sequel, Pathways to Possibility, has just been published, and though Roz is sole author on this one, the book is peppered with “Ben” anecdotes.

Though now divorced, Ben and Roz are still close (she lives just down his leafy street in Cambridge, less than a mile from Harvard Square). Ben looks back on their separation, 20 years ago, as a major turning point in his life. “I’d already lost one marriage,” he says. “When you lose two, it’s time to pay attention.”

By paying attention, Ben turned that separation into a new beginning. Until then, he admits that he was a typically imperious maestro, “going through life like a bull in a china shop, having a wonderful time and bashing people along the way.” When Roz expressed her dissatisfaction in the marriage, the two had what Ben calls a “transformational conversation.” That conversation led to The Art of Possibility and, for Ben, to a new way of thinking, conducting and living.

“My life was successful, but in some ways, it was at the expense of my marriage, of the people around me,” Ben says. “When the marriage ended, I went from being a fool to being aware, from being narcissistic to going for having shining eyes around me,” he says.

One way Ben accomplishes this is by inviting his musicians, children and adults alike, to leave notes on their stands after every rehearsal, with their thoughts on the performance, and on how everyone might do things better, including Ben himself. While this might seem like the normal kind of give and take between any leader and his team, orchestral conductors are an autocratic lot, not known for asking a musician’s opinion, much less apologizing.

Ben apologizes—sometimes mid-song—and then some, routinely stepping off the podium to do a few dance steps to demonstrate a passage, or even asking a member of the orchestra to take over for a spell. These techniques, he says, keep everyone around him invested in the process. “I’ve learned that you don’t have to push people around,” Ben says. “Giving up that way of being has been a great relief.”

A spark of inspiration

Ben’s exuberant methods get results beyond heart-lifting music. He aims to do nothing less than to change people’s lives.

“Take a look at this!” he says, reading from a letter he received from a woman who played violin in a concert he recently guest-conducted. The musician starts by detailing how she endured years of being made to feel invisible in the back row of her section. And then came Ben, who gave her the freedom to express herself with “innocent playfulness,” to look at life in a new way. “You not only gave us your imagination, your authenticity, your passion and energy, but you made it okay for us to feel the same way, to play the same way,” she wrote. “It was like giving water to someone in the desert.”

“I’m using my energy so that I can create experiences like this,” he says, clearly moved. “To me, this is happiness,” he says. More than that, the letter embodies his life goal of connecting, of affecting everyone he meets, of awakening them to their own possibility. “I want to keep doing what I’m good at doing. Knowing I can make a difference—that is what gives me purpose. To get a letter like that, I mean, what could be more rewarding?”

As Ben approaches 80, his reach, his capacity to change attitudes, whether of a cynical CEO or a violinist in the back row of an orchestra, is more powerful than ever. “In my master classes, I used to teach 50 students. Now, those classes are online, and 35,000 people watch them on YouTube.”

Ben is also teaching conductors to conduct differently. “You have to be very careful about the words that are coming out of your mouth, whether you are a conductor, a parent, a spouse or a politician,” he says. “Years ago, I didn’t realize that I was being demeaning. But if you do things right, you get happiness, and people will flourish all around you.”

Paula Derrow is a writer and editor who specializes in psychology and personal essays. She divides her time between New York City and Connecticut.