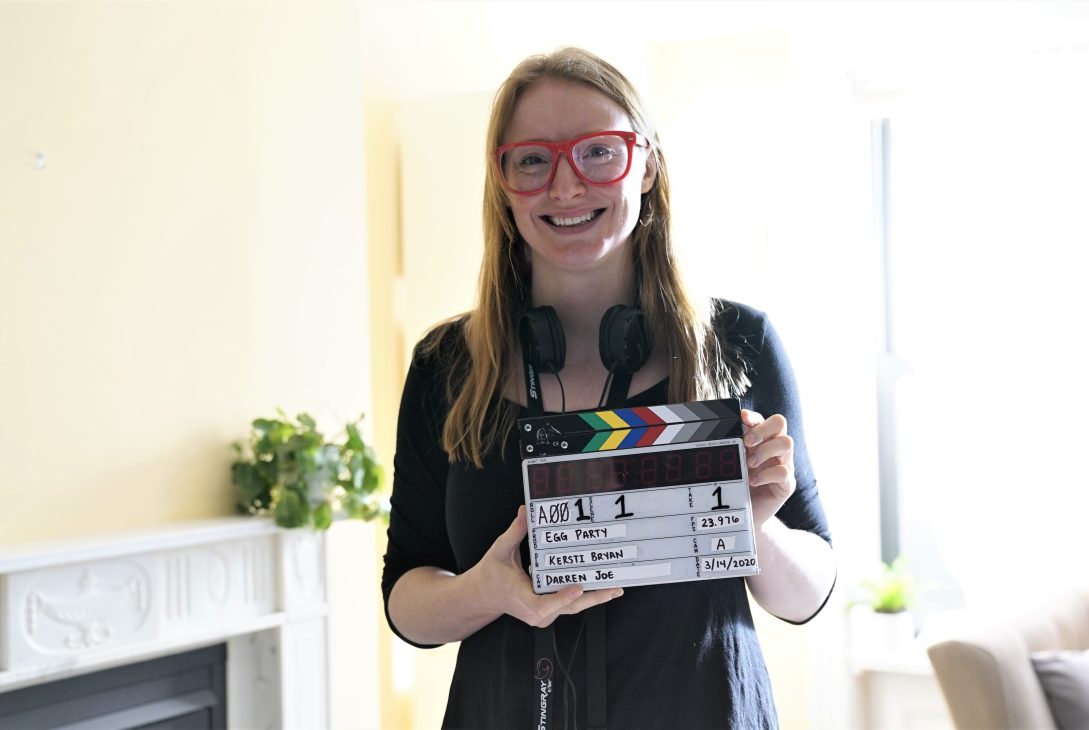 Whether its starring in AMC’s Tales of the Walking Dead or releasing her new short film in which she wrote, produced and directed, Kersti Bryan has been very busy lately. Using real life as her muse, Kersti’s short film Egg Party was inspired by an egg-decorating party that she attended with her girlfriends all in their 30s where the conversations ranged from break-ups to aging to fertility. Already garnering multiple awards and praise on the film festival circuit, including the Cinequest Film, COVEN Film Festival and the New York Shorts International Film Festival, Kersti hopes her short film of vulnerability, grief and ultimately healing, can serve as a safe place for women to have difficult conversations.

She is also a big believer in positive messaging. During the pandemic, while stuck in quarantine and unable to perform, Kersti and her friends pooled their artistic talents to create messages of hope for the frontline workers at New York hospitals who sacrificed so much for other people. Coined The Clear Day Project, the movement gained so much attention it was featured on CNN.

Live Happy recently connected with Kersti to discuss the things that contribute to her own happiness, including creating change through art, being there for others and why grieving really is a function of healing.

What Inspired the Characters Portrayed in Your Short Film Egg Party?

Egg Party was “hatched” out of a real-life egg decorating party in Brooklyn. As a woman in my late 30s, I was going through a breakup and I was on my way to this party and realized I had written: “dying egg party” in my calendar—misspelled. Dying vs Dyeing. I was like: “Yikes! That’s BLEAK!” At the party there were several female comedians that were lifelong friends and we were all talking so openly and hilariously about things I couldn’t say out of my mouth: Sex, aging, fertility. It was amazing. At that same moment, a number of very close friends (that were not present at the party) were struggling with the very difficult experience of miscarriage. When I began co-writing with my pals Ashton Heyl and Claire Kennedy, we wanted to hold on to that hilarious dynamic. So many of these characters within Egg Party were inspired from those party attendees as well as other friends.

IN YOUR OPINION, WHY IS GRIEVING SO IMPORTANT TO THE HEALING PROCESS?

In my artistic practice, I am drawn to chiaroscuro paintings—the play of light and dark living side by side. That was our inspiration with the lighting throughout the little film and in the egg portraits that are so beautifully created by our production designer Christina Read. These women are dealing with grief and healing at the same moment. I believe grieving is so much part of joy. To understand one fully, you must understand the other.

DID YOU LEARN ANYTHING ABOUT YOURSELF WHILE DIRECTING THIS SHORT MOVIE?

Oh, my heavens, yes. This is my directorial debut, so I was in a “learning place.” I learned a great deal about communication and collaboration. I learned how to ask for help and also how to get out of the way! It’s helpful when you have such great talent around you.

CAN YOU TALK ABOUT THE CLEAR DAY PROJECT AND WHAT INSPIRED YOU TO TAKE ON THIS ENDEAVOR?

In the early days of the pandemic, The Clear Day Project was an idea my pals Jordan Dean, Dan Amboyer and myself had in an effort to give back front line medical workers in NYC that were sacrificing so much. We each had a Rolodex of Broadway singers, dancers and artists that were just sitting at home because of the pandemic! So, we asked all our friends to share a small video of a song, message of comfort, piece of text or whatever they wished. Jordan, who has a complex heart condition, has a close connection to Mt. Sinai Hospital in NYC because they saved his life. We partnered with the hospital to get these messages of hope directly to the staff at Mt. Sinai. We compiled and shared nearly 80 different videos of hope. You can check out some of these amazing messages on our website for a pick-me-up cleardayproject.org.

WHY DO YOU THINK THERE IS SO MUCH POWER IN POSITIVE MESSAGING?

My grandmother Doris was a major believer in HTRT: “Hold the Right Thought.” Of course, there will always be difficult things we encounter in our days, but I believe what we focus on expands. Putting positive messages front and center and “holding the right thought” keeps those positive things growing. So, HTRT!

HOW DOES YOUR CREATIVITY CONTRIBUTE TO YOUR HAPPINESS?

It has taken me (and many of us!) a long time to manage our sensitivities to this world. My creative process has helped immensely to digest some of the big feelings and big experiences of my life. Writing poetry, music (I play the harp and piano), painting, acting. These are some of my tools to help me crash around and try to make sense of things. It’s the SHARING of those pieces with the world where the happiness comes. When someone watches and is changed—maybe feels not so alone. That makes me happy. I hope our short film Egg Party does that.

WHAT IS THE KINDEST ACT SOMEONE HAS EVER DONE FOR YOU?

HOW DO YOU MAKE OTHERS CLOSE TO YOU HAPPY?

I love to stay in touch. One of my most precious gifts I ever received was an old-fashioned 1940s type-writer that is the weight of an anvil. So, I write notes of encouragement to my loved ones on it. The last few holidays for my niece and nephew, I created a couple of winter fairies that come during the holidays very early in the morning to leave special treats like buttons, sparkly string and notes for them under their tree.

WHERE IS YOUR HAPPY PLACE?

My happy place is sitting with my family in front of the wood burning stove with a cocoa at my Uncle Andy’s High Lonesome Hut in Fraser Valley, Colorado when the snow is falling.