Are We Having Fun Yet?

Disneyland may be the “happiest place on earth,” but it wasn’t the first locale to promise nonstop entertainment. 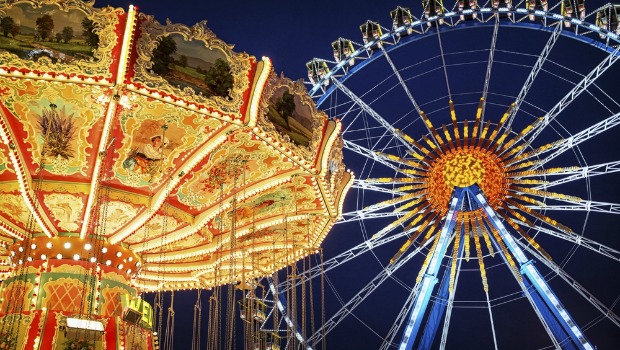 A short history of the amusement park

Last weekend I took my children to Disney World, the self-described “Happiest Place on Earth.” If that is true, then I may be in trouble.

Don’t get me wrong. My kids loved the experience. But even my 6-year-old son began to bridle after a while at all that contrived “fun.” Waiting in long lines and battling crowds in the heat prompted his mocking refrain, “Have a magical day.” It is the phrase that all Disney employees are apparently required to utter whenever they interact with the clientele. They are professionals, and they sell it well. But both as a promise and as a measure of our expectations, magical fun tells us something about just where we are in history.

Those who could afford the luxury have been paying for entertainment since ancient times. Yet the rise of places like Disney—amusement parks whose sole purpose is to amuse, providing ordinary people with “fun”—is a much more recent development. We can trace the origins by tracing the word. “Fun” came into English usage in the late 17th century, likely as a derivation of the medieval fonne or fool, a nod to the court jesters whose job it was to entertain the king. But “fun” was also likely related to the Renaissance verb fon, meaning to hoax or cheat, and it retained that connotation for some time. Francis Grose’s Classical Dictionary of the Vulgar Tongue in 1785 included the example, “Do you think to fun [cheat] me out of it?” And of course we still use the phrase “to make fun of” in a way that suggests this older usage.

Yet by that point, in the Age of Enlightenment, in Western Europe and its colonies in the New World, to have “fun” was increasingly thought of as innocent amusement. Whereas men and women in previous ages had often looked at pleasure as a slippery slope to sin, those in the expanding “middling” classes in the 18th century set about proclaiming pleasure’s virtues, treating gaiety as an end in itself. To dance, sing, enjoy our food, revel in our bodies and the company of others—in short, to delight in a world of our own making—was not to defy God’s will but to live as nature intended. And to be happy, as the English poet Alexander Pope put it in a celebrated line, was “our being’s end and aim!”

Given this new sensibility, it’s not at all surprising that the 18th century gave rise to the world’s first amusement parks or “pleasure gardens,” as they were known, places where men and women went simply to enjoy themselves and to be amused. In Paris at the Palais Royal, in Vienna at the Prater, at Vauxhall or the Ranelagh Gardens near London, or at the former's namesake, the Vauxhall Gardens in the Bowery in New York, ordinary men and women gathered for no other reason than to have fun.

Flush with the disposable income of expanding commercial economies, they would while away an afternoon or evening promenading, drinking coffee and tea, wine and beer, or eating ice cream and sweets. There were music, costumes, fancy dress, and entertainers of all sorts—jugglers, actors, puppeteers and mimes. These pleasure gardens attracted crowds with unusual and sometimes exotic attractions, such as a Chinese Pavilion at the Ranelagh Gardens in London.

Many other pleasures were at hand. The Palais Royal—which still stands, a stone’s throw from the Louvre—boasted countless shops, cafés, and restaurants—themselves new-fangled innovations where one could “restore oneself (restaurer) in order to go have more fun. (Not all pleasures were innocent in Paris, however. Prostitution and gambling were also rife at the Palais Royal.)

The road to Disney

These founding pleasure gardens were the ancestors of the great circuses and amusements parks of the 19th century: Tivoli Gardens, Blackpool, Coney Island, Barnum & Bailey and other mass attractions that offered a bounty of pleasure, amusement and entertainment. These places were not meant just for the upper or middling classes, but for workers and day laborers, who flocked to the penny arcades to have their bit of fun. And these attractions in turn laid the foundations of the sprawling entertainment industry of the present day.

Today, one need not go to a specific “place” to have fun. We have our smartphones, tablets, and “entertainment centers” right in our homes that allow us to enjoy music, film, video games and other sedentary amusements. But people are wired to gather and enjoy things in a communal setting. Instead of Vauxhall Gardens, we promenade in the mall or on a popular shopping street.

Locales specifically dedicated to fun have proliferated and morphed into fun parks, such as Busch Gardens, Dollywood, Six Flags and of course Disneyland and Disney World. They may not always be the happiest places on earth—especially when they leave you sunburned and standing in line, placating a tired toddler. But in their aspiration to deliver total entertainment—and in the expectation they foster that we are entitled to such entertainment—they are legacies of a long-standing vision of happiness and having fun.