Hollywood Takes on the Pursuit of Happiness

In a new film by director Peter Chisholm, a psychiatrist named Hector embarks on an epic search for true happiness. 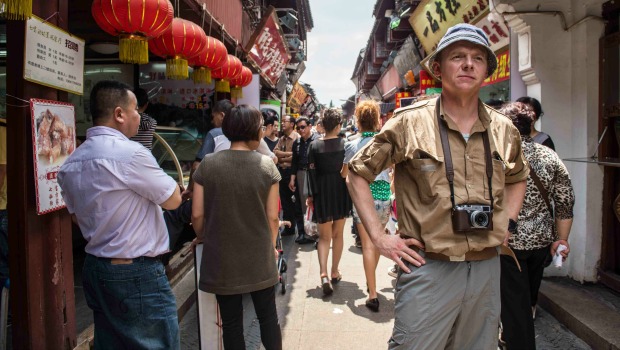 "Hector and the Search for Happiness" shows you don't have to travel the globe to find what's right under your nose.

Searching for a lost cell phone or set of keys makes sense. But when you’ve misplaced what the French call joie de vivre—a hearty joy of living—searching will only lead you astray. Happiness happens not through a hunt, says film director Peter Chelsom, but by happenstance.

“True authentic happiness,” he says, “is a byproduct of full immersion in something else—communicating, teaching, learning, giving, dancing, singing.” Or as the happiness researcher in Peter’s new comedy-drama, Hector and the Search for Happiness, puts it, “We should concern ourselves not so much with the pursuit of happiness, but with the happiness of pursuit.”

Based on a best-selling French novel by François Lelord, the movie follows the around-the-world journey of Hector, played by British actor Simon Pegg (Shaun of the Dead), as he seeks the secret to happiness. A successful psychiatrist with a tricked-out London flat and a beautiful, smart and solicitous girlfriend, Hector is feeling trapped by the cautious routine of his life and infuriated by his patients, what with their depression and never-ending laments about their marital woes.

After he finds himself ranting at a hapless patient, Hector sets out on a quest, backpack and journal in tow. His travels take him to China, Africa, a monastery in Tibet and Los Angeles, where he reunites with an old girlfriend. Along the way, he comes close to getting killed more than once; falls for a woman who turns out to be a prostitute; and fills his journal with aphorisms like “Listening is loving,” “Happiness means being loved for who you are,” and “Avoiding unhappiness is not the road to happiness.”

Peter admits, “These are the kinds of things you might find in fortune cookies,” but that he found power in the simple fable. “I felt transformed by making this movie,” he says. “It filled me with such a sense of gratitude”—and a new understanding of what comprises happiness.

He says he talked to happiness researchers to make sure that a final scene of the movie, which has a neuroscientist mapping Hector’s brain waves, was accurate. “I was so gratified when researchers told me we got the details right,” says Peter, who co-wrote the script. “When you’re truly happy, your brain lights up like the aurora borealis. Happiness is not one color or one experience; it’s embracing the dark along with the light, the good with the bad.”

So, where does Hector eventually find happiness? Let’s just say—spoiler alert—you don’t need a plane ticket to get there.