Singer-songwriter makes an effort to be hopeful and joyful—for himself as well as his fans. 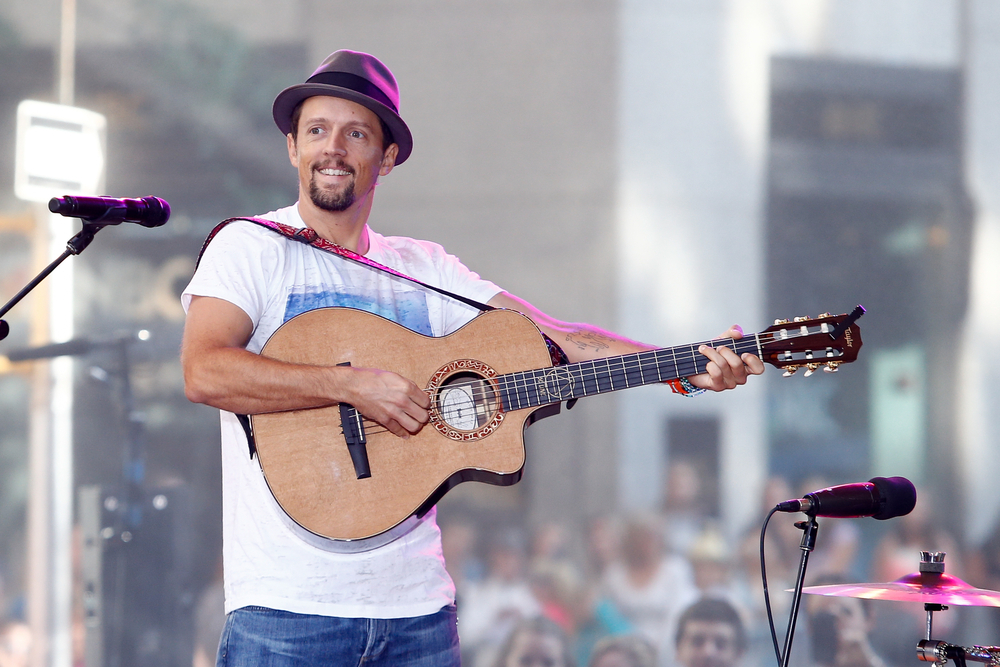 Singer-songwriter makes an effort to be hopeful and joyful—for himself as well as his fans.

When Jason Mraz broke onto the national scene in 2002, he arrived without a disguise. Below the tilted trucker cap on top of his head and above the fuzzy bunny slippers on his feet  was a confirmed optimist, upbeat and positive. Bouncing on his toes, he sang one of the earwormiest hits of the new century. “If you’ve gots the poison I’ve gots the remedy, the remedy is the experience,’’ he sang in “The Remedy (I Won’t Worry).”

Maybe we weren’t sure exactly what that meant, but we didn’t press the pause button to ponder; instead, we threw back our heads and joined Jason as he pronounced his cheerful credo “I won’t worry my life away.’’ Only after a while did we absorb that the song had a darker edge, that it was written in response to the news that his best friend from high school had been diagnosed with a rare bone cancer. For just a moment in the song, Jason shakes his fist at the heavens (“Who says you deserve this? And what kind of god would serve this?’’)

But the singer is not the type to invest much in pointless anger or self-pity. The answer to the bad deals in life is to change your point of view, he says. Or, again from “The Remedy”: “You can turn off the sun, but I’m still gonna shine.’’ Almost a decade and a half later, the artist, now 38, is older, more mature, wiser. He bounces less, the bunny slippers have been retired, the trucker cap has been mostly traded in for a hipster’s pork pie, but otherwise, the person is not fundamentally different. Jason is no longer a coffee house ingénue, but says he remains convinced that life is what you make it, and the capacity to make it great resides within each of us.

“I try to be happy,’’ he says, “but even if I’m not, I choose to have an optimistic outlook on life.’’ This outlook, this choice, infuses every element of his life, from his music to his interests to his feelings of responsibility as a member of the human race. “The future depends on how I set it up in the present,’’ he says . “I try to live optimistically to live out the best life I can.”

I try to be happy,’’ he says, “but even if I’m not, I choose to have an optimistic outlook on life.’’

Jason says he is a great believer in the power of “saying ‘yes,’ ” in treating life’s opportunities with enthusiasm. “Yes is the key that unlocks potential,” he says. “It really is the key to creativity, and that creativity doesn’t happen if you say ‘no.’ If you’re in a theater and you’re improvising with someone, and you say ‘no,’ that’s the end of the scene!” Saying ‘yes’ is a concept so significant for Jason that he made Yes! the title of his fifth and most recent album, on which he collaborated with the all-female band Raining Jane. “The way I see it,” he says, “If Raining Jane hadn’t said ‘yes’ when I asked them to collaborate, this album would not have happened. If the label hadn’t said ‘yes,’ this album would not have happened. I see yes as the key that unlocks opportunity.”

Jason’s optimism is the hallmark of his brand, one of the most consistent there is in popular music. Such contemporaries as John Mayer and Ed Sheeran mix songs about love’s ecstasies and miseries in equal measure. That’s not Jason’s bag. “My albums are themed to be upbeat and inspiring,’’ he says. “I want to uplift, inspire, and make people dance.’’ One only has to look at hits like “Love Someone,” “You and I Both,” and the irresistibly catchy ”I’m Yours” (“my happy little hippie song,’’ he calls it) to see that this is an artist whose message, music and audience are perfectly in sync.

These chart-busting tunes result from a disciplined gleaning process; Jason once estimated that to get the dozen songs that appear on an album, he will write 80. “The ones that don’t make it are either too cheesy or superdark and depressing,’’ he has said, “and I don’t want to subject the audience to either one.’’ From time to time, something melancholy slips through, but even then, as in a song like “I Won’t Give Up,” he manages to turn a song about a relationship that isn’t working into a testament to everlasting romantic devotion. “I’m inclined to sing songs that I need, that light my spirit,’’ he says. “In turn, that gives fans what they want.’’

Now always on the sunny side

For Jason, music ameliorates whatever pains and disappointments he may encounter. “I wake up grumpy,” he admits in a surprising confession. But “I write many songs to fill the love I may not have experienced when I was a kid or the love I’m not experiencing now.’’ Divorced from wife Sheridan in 2004, Jason split with fiancee Tristan Prettyman, a singer, in 2011. “This world may seem unfair at times,’’ he says, “but we have the ability to dream, and that helps.’’

Among other things that Jason finds helpful is yoga. Like most everyone, reading the newspaper can get him pretty bummed. “It’s hard to stay completely positive when there is suffering in the world that all humans have to endure,’’ he says. “But I use music and mantras to transform my thoughts from the negative to the positive. If the world seems like a terrible place, I can transform my feelings by thinking or saying, ‘I won’t give up,’ ‘I won’t worry my life away’ and ‘I won’t hesitate no more.’ That is, I believe, what makes me a positive person. Through meditation and yoga, I can move energy through my body and ease any relentless thoughts I have, allowing me to focus and concentrate my attention where I need it to be.’’

Increasingly, that attention is directed to the broader world, how he fits into it, and how he can change it.

Getting down to earth

There’s no telling how many farmers aspire to be international pop stars—more than a handful, we’re guessing—but Jason is that rare international pop star who wishes he could spend more time in the dirt. “I love spending time at my farm,’’ he says, “but it can be a problem because I’m out on the land sometimes until midnight.’’ Jason owns a 5.5-acre farm north of San Diego, where the self-described “organic gardening geek’’ raises chickens, keeps bees, and grows corn, peppers, leafy greens and most especially avocados.

He is serious about his crops, not only because in one recent year he sold 34,000 pounds of avocados to local Chipotle stores—also because they provide a large percentage of his vegetarian diet. (He began changing his diet in 2006, when he opened for The Rolling Stones at a few concerts. Until then a smoker and confirmed junk food devotee, Jason saw how the aging rockers took care of themselves, and adopted their program.)

Jason is enthusiastic about his agrarian accomplishments. Writing recently on his website, he encouraged his visitors to become urban farmers, if possible. “It’s about making the most out of a small piece of land,’’ he wrote, heaping praise onto the educational website UrbanFarm.org. “It’s about declaring your yard, your courtyard or windowsill an actual farm. And then working with the seasons, the sunlight, and local resources like discarded materials and water runoff to bring it to life as conveniently and cheaply as possible. It’s the foundation for the idea ‘Think globally, act locally.’ ’’ Is it any surprise that Jason sells packets of seeds at his concerts?

A big part of his positive message is expressed through activism and philanthropy. Some of his efforts take the form of broad, dramatic gestures, like the concerts against human trafficking that he played in the Philippines and Myanmar. Other efforts are local and specific. “On my last tour, I chose to make the venues smaller and play more nights in each market. We set up community-based events and awarded grants in a lot of those markets. More broadly, we partner with several organizations and focus on equality, the environment, and healthy living and eating.’’

“I’m just ready for a break,’’ he has said, noting that the long tours make performing “feel like a corporate job sometimes.’’ At the same time, it’s hard to see how an artist whose music invigorates the spirit not only of his audience but his own as well could leave that behind. But whatever path Jason chooses, it’s all but certain to lead to something interesting and uplifting. “I love to write music and be in the studio,’’ he says, “but there is creativity in everything we do, and it should be nurtured.’’
(From the October 2015 issue of Live Happy magazine.)
(Visited 228 times, 1 visits today)
Popular Articles