Theo Rossi Has a Lot on His Plate

Between intense TV and movie roles, actor Theo Rossi makes a point of giving back to the community—in a big way. 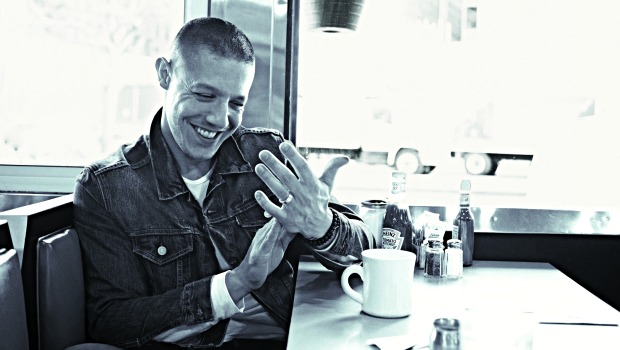 Between acting, producing and entrepreneurial projects, the 'Luke Cage' star finds time to give back.

Actor and producer Theo Rossi has turned altruism into an art form. Here’s a guy best known for his rich, haunting portrayal of Juan Carlos “Juice” Ortiz on the long-running FX series Sons of Anarchy (SOA)—an envelope-pusher to be sure—but strip away a few layers of the man and you find a bona fide catalyst of change.

That’s because at his core, Theo is both a loyal family man and a philanthropic renegade backing a throng of humanitarian causes. It’s hard not to be inspired by his ties to health organizations, military causes or his Staten Island, New York, roots.

“New York City is an incredible place to grow up,” Theo says. “You see a lot of everything. At a very young age, my family taught me to give of myself. If somebody needed something, I was always the first one there.”

Raised predominantly by strong women—his mother, grandmother and older sister—he says his Uncle Kenny became a significant influence during his teen years in lieu of his distant father. “It wasn’t a big family,” Theo adds, however, “every one of them had one thing in common, which was: ‘Be the best you can to people and do as much as you can.’ And it was never about us. It was always about other people.

“My family always reminded me of how short life is. That’s why I think I am trying to do so many things. Because it was always a constant reminder that we’re not here that long at all.”

Clearly, Theo’s upbringing fueled some of his charitable passions, and his acting career led to even more. SOA debuted in 2008 and ran for seven seasons until 2014. 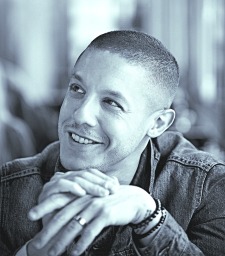 “We premiered the same night that John McCain announced that Sarah Palin was going to be his running mate,” Theo muses. “Nobody watched the show. I thought, ‘OK, this will be on for one season.’ ”

But it was during the show’s sophomore season when things shifted dramatically. Poet-activist and former SOA co-star Henry Rollins encouraged Theo to consider doing a USO tour. His initial response: “Wow!” And then…“What?”

Theo is a big fan of the men and women of the U.S. armed forces, but he pointed out to Henry that “nobody knows about this show.” Henry just laughed and informed Theo that SOA was actually the No. 1 show in the military.

“The next thing I know, me and three other cast members were on a plane heading to Iraq,” Theo says about that USO tour. Like a kid relaying escapades of a whirlwind adventure, he gushes that hanging out with the troops was completely life-changing.

“They may have thought it was for them, but I got so hooked. From that moment on, I thought, no matter what, I am going to do whatever I can to support the military.”

The Texas-based charitable organization began as a photo project launched by four women and quickly grew into a more proactive way to show and promote patriotism. It funnels the retail sales of combat boots, merchandise, sponsored events, public donations and corporate sponsorships to support, among others, three key programs: Awareness, patriotism and assistance.

The awareness program recruits ambassadors—like Theo—to educate the public about service members’ issues and triumphs. The patriotism program encourages people to wear combat boots—both as a fashion statement and symbol of support for the military and their families. And the assistance arm includes the ReBOOT campaign, where donations directly connect veterans with the help they need in dealing with PTSD, depression and other transitional issues they face after combat.

“Boot Campaign wanted to shoot the entire cast in combat boots, and sometime afterward, we started forming all these ideas,” Theo says. “One of them was a Boot Ride every year with the guys from the show.” That outing offered fans a chance to spend a day riding motorcycles with SOA cast members, raising money for service members in the process.

“We wanted to raise a ton of money and give it back to the men and women in the military because when they come home from their tours, that’s really when a whole other ‘fight’ begins,” Theo explains. “You have to get acclimated to your spouse again, and get jobs, and then there’s therapy involved. The suicide rate of our veterans is staggering. And what these people are doing—their families are moving constantly; these guys are going to Iraq and Afghanistan, not asking any questions. They’re just going and sacrificing themselves, leaving their families, their kids.”

Since Theo’s initial involvement with Boot Campaign, he has visited most major military bases in the country. But that was just the beginning of his philanthropic leanings.

Go get it life

It never fails—you can always find a silver lining (or two) around every dark cloud. After Hurricane Sandy hit the East Coast in October of 2012 and practically leveled Staten Island—the stomping grounds of Theo’s youth—he was on hand, “pulling water out of basements and bringing people clothes.”

What he really wanted to do was form a nonprofit to raise funds for hurricane victims, but that simply would take too long. Instead, he collaborated with Boot Campaign and, together, they launched Staten Strong. The enterprise galvanized a team of community first responders to deliver emergency care and financial resources to local residents. 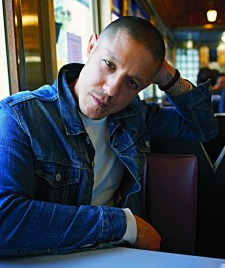 Through his efforts, Theo received an unexpected gift. At a Boot Campaign/Staten Strong event, he was reacquainted with Boot Campaign liaison Meghan McDermott. They had met before, but this time something clicked. The two began dating shortly thereafter. They were married in 2014 and now have an 18-month-old son, Kane Alexander.

“It was one of those things where you are at the right place at the right time,” Theo says. With everything else going on—philanthropic outings and his acting work—he kept himself motivated by listening to the speeches of Martin Luther King, Jr. and Tony Robbins.

“I always need to listen to these great motivational speakers who put me in a better place,” he notes. “Because sometimes I find that social media is polluted with negativity. That’s why I started using the hashtag, #GoGetItLife.” It was simple enough. On his social media pages, he would write things like, “Just get up, run, go five miles! #GoGetItLife.”

Theo thought he was doing it for himself, but after receiving so many responses to his #GoGetItLife tweets, he jumped at yet another opportunity to spread positivity. Wanting to do more, he rallied his creative team. The posse birthed a web platform, gogetitlife.com, which invites contributors to share personal life stories. It grew from there, and now includes a 5K race on Staten Island—Theo is an avid marathon runner—as well as an offshoot campaign series dubbed #RightToBeMe. The latter is geared to people born with intellectual or developmental disabilities having the same life experiences as those without the same medical conditions.

“Everybody’s been through something,” Theo points out. “When people share their stories, they never know who it’s going to affect. The site has really morphed into a motivational hub where people can interact, and it houses different charities I’m trying to help out.

“It just shows that, for minimal effort, you can put something together that can affect a lot of people.”

He continues to create things to help encourage health and happiness. Early last year, he surprised even himself by establishing a bottled water company. Ounce Water was an idea that arose from Theo’s healthy habit of consuming enough water daily. He wanted others to have a healthy daily intake as well, so he met with doctors and advisers and managed to obtain water from, as he tells it, “an incredible aquifer in upstate New York, untouched by man—a 600-million-year-old spring. When they told me that, I thought they were lying. It just shows I should have paid more attention in school. I thought, ‘that’s old.’ I didn’t even know the Earth was around that long.”

Theo studied acting at New York’s iconic Lee Strasberg Theatre and Film Institute and went on to make a memorable impression with stints on TV shows like Hawaii Five-O and Grey’s Anatomy before leaping off of SOA and into the Netflix hit show Luke Cage, where he’s generating buzz as villain Hernan “Shades” Alvarez. 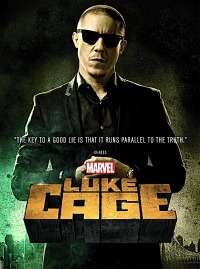 In 2016, his big-screen outings included When the Bough Breaks and Lowriders. Now 41, he says it’s his acting career that truly gives him the leverage to do everything else. Theo formed his production company, Dos Dudes Pictures, after he felt there was something missing on the cinematic landscape (read: depth). The first endeavor, Bad Hurt, was released in 2015, with Theo co-starring in the gripping family drama alongside Karen Allen and Michael Harney.

Other projects are in the works. Now, having created such a vivid, creative kaleidoscope, one has to ask: What has he learned? Theo laughs. “You know, Paul Newman was a person I always tried to emulate a lot in my behavior when I was first starting out. Paul said, ‘I don’t find anything special or extraordinary about being philanthropic…it’s the other attitude that confuses me.’

“I’m like that,” he goes on. “I don’t think it’s that incredibly special that people give or do things for charity or nonprofit, and go out of their way to help people. I think that should be the norm.

“But one of the biggest things I’ve learned is that it is not about you. It is about everyone else. I’ve always known that, but I have struggled with patience in my life. I had to learn. To me, life is a marathon, not a sprint. But you gotta be running. Run at a steady pace. Don’t gas out early.

“Patience has made me better for the marathon of life.”

Greg Archer is a multifaceted journalist and author whose work has appeared in The Huffington Post and O, The Oprah Magazine.