Hollywood journalist Ken Baker lived the high life but felt something was missing until he followed his spiritual faith.

Image from the cover of Ken Baker's book, "The Ken Commandments: My Search for God in Hollywood." Inline image care of E! Entertainment.

Journalist Ken Baker recently departed from his usual beat, chronicling the latest celebrity escapades for E! News, to embark on a deeper quest. After two decades as a Hollywood reporter, he was experiencing “existential anxiety.” Plagued by panic attacks and tormented by thoughts that he would one day die, as would his wife and two children, “I was distracted, unsettled, sad all the time,” he says. “I realized that to become a happier, healthier, more balanced person, I needed to rediscover and define my spiritual faith, practices and values.” 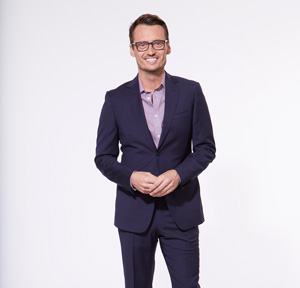 Ken, who also founded the Mindful Writing Center, an online writing academy, recounts that journey in his new book The Ken Commandments: My Search for God in Hollywood. Raised Catholic in Buffalo, New York, he begins his hunt for holiness by returning to his early faith. He takes Bible study classes with a preacher who tends to a flock of young Hollywood stars like Justin Bieber and Selena Gomez, and glimpses Gwen Stefani at services. He sits beside the Kardashians on Easter Sunday at a church that Kris Jenner helped launch.

He would go on to discuss atheism with Adam Corolla, have a disquieting visit to Scientology’s Celebrity Centre and what he describes as a “profound experience” with a young psychic who “was able to reveal to me knowledge about myself that was so deep I had forgotten about and had never written or shared.”

In the end, it was the meditation practice that Ken began under the tutelage of Deepak Chopra that brought him out of his funk. “It’s not an overstatement to say meditation saved my life, or at least saved the quality of my life,” he says.

What do I most desire?

What am I grateful for?

What is my dharma, or purpose, in life?

He also tries to be more mindful throughout the day, less reactive about, say, E! not assigning him the big Miley Cyrus interview. “Old Ken would get caught up in ego. Why didn’t I get it? I’m the best interviewer,” he says. Now he realizes that “comparison is the thief of joy, and there’s nothing to gain from becoming so attached to something that’s outside my control.”

Listen to our podcast: The Ken Commandments With Ken Baker