Find the Good: A Gritty Raccoon Gives Us All Hope 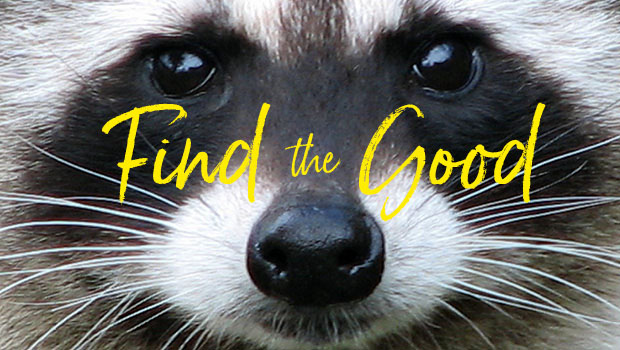 In our daily lives, it’s so easy to focus on what’s not right—burned toast at breakfast, the slow leak in your car’s back tire, that looming project deadline at work that defies progress. Positive psychologists say it’s our innate negativity bias—built in to help us ward off threats to life and limb—that makes it so easy to worry or stress about challenges large and small.

Yet one of the most important lessons I’ve learned in my five years building Live Happy—and many more before that—is that living a rich, happy and fulfilling life is about looking for, appreciating and savoring what’s good in our world and investing the time and effort to make those things even better.

So, this month I launch my new blog, “Find the Good,” where I share a few high points from our readers, partners and recent news reports.

The Critter Grit Award Goes to…

The #mprraccoon! In case you missed it, this tenacious 2-year-old female raccoon scaled a St. Paul, Minnesota, high-rise building in June after maintenance workers tried to lure her from a ledge about 20 feet above the ground.

Her death-defying 25-story climb to the top caught the attention of Minnesota Public Radio reporter Tim Nelson, who gave a name and a cause to the critter who would just not stop, except for brief adorable pauses with her whiskers squished up against office windows.

The Minnesota publication mspmag.com collected the best tweets from her viral adventure, including this one that spoke for us all.

And this very concerned Tweet from actress Debra Messing.

Fortunately, all appeared to end well, with #mprraccoon enjoying a bowl of stinky cat food on top of the world and eventually being released into a nearby private residential property.

Fighting Crime on the Streets of London

You can’t make this stuff up. Would you believe Sherlock Holmes actor Benedict Cumberbatch and his Uber driver leapt to the defense of a food delivery bicyclist getting pummeled by four muggers? Just around the corner from Baker Street, even. It was “surreal,” according to the Uber driver in this U.K. news article. “They tried to hit him [Benedict] but he defended himself and pushed them away,” the driver recounted. “He wasn’t injured. Then I think they also re­cognized it was Be­ne­dict and ran away.”

No bullying allowed on Benedict’s watch, which puts him firmly in our category of Happiness Hero.

As Matthieu Ricard says in this excerpt from his new book, In Search of Wisdom, “Don’t blame yourself for not doing what is beyond your strength, but do reproach yourself for turning away when you can do something.”

I highly recommend this brave series on mental health from Live Happy columnist and best-selling Profit From the Positive author Margaret Greenberg. Even though May is mental health month, it’s clear from watching the news and depression statistics that these insights are valuable and needed every day.

Here are Parts I, II, III, IV, and V. Please comment or share and help end the stigma.

It’s Lonely at the Top

“Leaders are overwhelmed, distracted and desperate for answers,” says Amy Blankson, best-selling author of The Future of Happiness: Five Modern Strategies for Balancing Productivity and Well-Being in the Digital Era.

If you’re one of those leaders, sign up now for Amy’s TechWell Retreat September 27–28 in Midway, Utah. Redesign your digital life to allow moments of peace and balance—Amy will show you how!

We Will Rock You

Was the mass celebration from the game-winning goal in the Mexico vs. Germany World Cup match enough to cause a mini man-made earthquake in Mexico City as reported on social media? While I’d like to think so, scientists are doubtful, according to livescience.com.

It also warms my heart to see all the amazing team spirit throughout the World Cup, most notably fans from Senegal and Japan helping to clean up their sections of the stadium after matches.

Keep looking for the good, and you’ll find it!