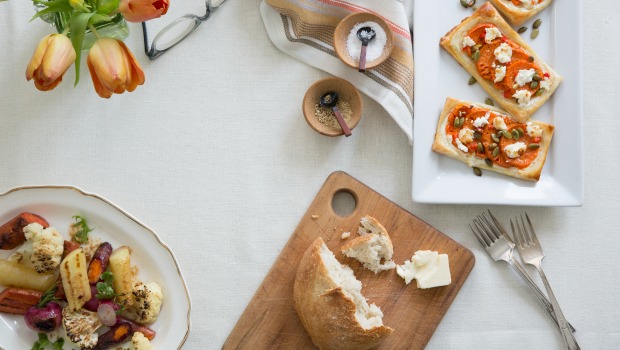 Chefs who collaborate are finding that sharing food connects us in more ways than one.

Food made and shared with love turns any meal with family or friends into the best of times. As a willing participant, we’re first seduced by wonderful aromas, then by the visual delight of new or familiar dishes, and finally, by flavors embodying happiness. Somewhere between the first sips and the last spoonful, we’ve smiled and laughed; swapped stories, jokes and opinions; reminisced about old memories and made new ones.

Making connections through food is a daily activity for chefs. They know one way to melt our hearts is to tantalize our taste buds. While we all need to eat in order to survive, when we share good food, we are living life. Four chefs who know this well are Yotam Ottolenghi and Sami Tamimi in London and Andrew Ticer and Michael Hudman in Memphis, Tenn.

All four men grew up in families where large, shared meals played a central role in everyday life. While the families of Yotam and Sami hail from the Middle East and Andy’s and Michael’s are from Tennessee, they held the same tradition in high regard.

The foods of both sides of Jerusalem

Yotam and Sami spent their childhoods surrounded by food and family. Both were born in Jerusalem and they grew up just a few miles from each other—Sami in the walled, largely Palestinian Old City of Jerusalem and Yotam in Jewish West Jerusalem.

Both experienced the joy of food and cooking at a young age, but found their calling in different ways. Wanting to break free of the more conservative attitudes of their hometown, the young men found their way to more cosmopolitan Tel Aviv in their early 20s, where Yotam was an assistant teacher and budding journalist, and Sami pursued a cooking career.

It was on the doorstep of a west London restaurant, Baker and Spice, where the two finally met in 1999. Sami, who had by then attended Le Cordon Bleu cooking school, was the head chef, and Yotam worked in pastry. After a 30-minute conversation, they realized the serendipity of their pasts. A friendship formed, leading to the opening of the first Ottolenghi restaurant three years later.

The various combinations of Yotam’s German and Italian heritage, Sami’s Arabic upbringing, the vibrant street foods of Jerusalem, and cooking with their respective grandmothers and aunts have influenced what diners experience today at the four Ottolenghi locations and their fine-dining restaurant, NOPI, all in London. Mid-Eastern, Mediterranean, Muslim and Jewish traditions mingle, along with a nod to California and a grab for the occasional Japanese ingredient.

For both chefs, happiness comes back to the sharing of food. “Food is not a panacea and a bowl of hummus is not going to bring about world peace,” Yotam says. “Sitting around a table and eating together is a good place to start, though.”

“How can you be miserable when being offered a platter full of roasted aubergine [eggplant] or butternut squash topped with green herbs and purple, jewel-like pomegranate seeds?” Sami adds. “It’s sunshine on a plate.”

Connection to the past also runs deep with Andy and Michael. Friends since the sixth grade and raised with the family-oriented, hospitality driven traditions of the South, they had another influential presence in their lives. Both grew up in large Italian families with wise, adoring grandmothers who dispensed love and advice along with tastes of whatever robust dish they had in the oven or bubbling on the stovetop.

Andy and Michael each credit their "Maw Maw’s cooking" as their inspiration for what they do today. Their photographs have prominent places in their restaurant, Andrew Michael Italian Kitchen. Their cooking is the best of both Italy and the American South: Tortellini is stuffed with black-eyed pea purée, pecorino romano lives comfortably with crispy fried chicken skins and Calabrian sausage flavors a simmering pot of collard greens. Ingredients are sourced locally; what farmers bring around drives menu choices. When something new comes into the kitchen, it spurs creativity.

“When you cook, when you spend all this time being into the food; you want to share it,” Michael says. “Our guests are coming into our house to eat our food and break bread with us. We want you to put everything aside and just enjoy yourself.”

These addictive fritters are Sami’s mother’s recipe. She used to make them once a week and give them to the kids in a pita to take to school for lunch. They are not dissimilar to Indian pakoras. Best eaten hot or warm or taken on a picnic—in a pita, of course, with some hummus and tomato.

To make the lime sauce, put all the sauce ingredients in a bowl and whisk well. Taste—looking for a vibrant, tart, citrusy flavor—and adjust the seasoning. Chill or leave out for up to an hour.

To prepare the cauliflower, trim off any leaves and use a small knife to divide the caulifower into little  orets. Add them to a large pan of boiling salted water and simmer for 15 minutes, until very soft. Drain into a colander.

While the cauliflower is cooking, put the flour, chopped parsley, garlic, shallots, eggs, spices, salt and pepper in a bowl and whisk together well to make a batter. When the mixture is smooth and homogenous, add the warm cauliflower. Mix to break down the cauliflower into the batter. Pour the sunflower oil into a wide pan to a depth of 2⁄3 of an inch and place over high heat. When it is very hot, carefully spoon in generous portions of the cauliflower mixture, 3 tablespoons per fritter. Take care with the hot oil!

Space the fritters apart, making sure they are not overcrowded. Fry in small batches, controlling the oil temperature so the fritters cook but do not burn. They should take about 2 to 4 minutes on each side.

Remove from the pan and drain well on a few layers of paper towels. Serve with the sauce on the side.

(Recipe are from Ottolenghi: The Cookbook, Ten Speed Press, 2013.)

“One day in mid-fall, we had a party scheduled for the restaurant, and we needed to come up with a passed appetizer for the event. For some reason, nothing really excited us, and then the Woodson Ridge Farm delivery truck pulled into our driveway. Leslie had some incredible looking beets that day that sparked an idea.

We wrapped the beets in aluminum foil and laid them right on the embers of the pizza oven to roast. When they were tender, we cut them into pieces and poured some of our house pickling liquid over them. We wanted something nice and bright to go with them, so we combined some yogurt, ricotta, chopped fresh herbs and citrus juice into a thick spread.” — Michael Hudman

Place the beets in a roasting pan and cover with aluminum foil. Roast until tender when tested with a knife tip, about 45 minutes. Set the beets aside until cool enough to handle, then remove the skins and quarter. Put the beet quarters in a mason jar or nonreactive bowl.

In a saucepan, combine the vinegar, ½ cup water, the sugar, coriander seeds, peppercorns, mustard seeds, onion, bay leaves, tarragon and thyme, and bring to a boil over high heat. Reduce the heat to medium-low and simmer for 10 minutes. Taste the liquid for flavor balance, but be careful not to take a deep breath or it will make you cough. Strain the pickling liquid and allow to cool to room temperature. Pour the liquid over the beets, cover and refrigerate overnight.

To make the tarragon yogurt, blanch the tarragon and mint in a saucepan of boiling salted water to brighten their color, about 10 seconds. Plunge them into ice water to lock in the color. Drain the herbs and squeeze out any excess water. Roughly chop the herbs and put them in a blender with the lime juice, orange juice and ice cubes. Blend on high speed until liquefied, about 3 minutes. Do not let the mixture get hot, or it will turn dark green. Pour the purée into a bowl and stir in the yogurt and ricotta. Season to taste with salt.

To make the crostini, preheat the oven to 350 F. Arrange the baguette slices on a baking sheet and brush them generously with the olive oil. Bake until golden brown and crisp, about 10 minutes.

To serve, remove the beets from the pickling liquid and cut them into smaller pieces, if you like. Arrange the crostini on a platter and spread each one with the tarragon-yogurt mixture. Top with the beets and garnish with the Gorgonzola.