The Joy of Kneading

When you make things like bread and pastry by hand, you get more than a tasty treat and some sensual satisfaction—you may also be boosting your brain health and wellbeing. 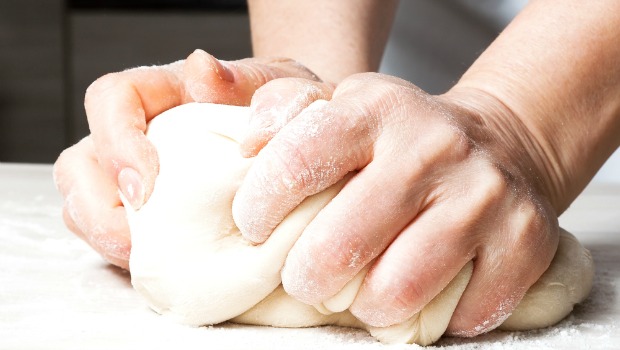 I was a frustrated bread kneader.

I wanted to fill my house with the intoxicating aroma of fresh-baked bread, if not daily, then at least on a weekly basis. Aside from desiring the crusty finished product, I couldn’t resist the romance of the process—imagining myself wearing a floury apron, falling into a meditative rhythm as I turned the dough over and over, coaxing flour and water and yeast into a pillowy, elastic ball. But for one problem—my pathetically weak upper arms.

The need to knead

“Knead the dough until it is smooth and elastic, about 10 minutes,” the recipe would read. Ten minutes later, my dough was still shaggy—nowhere near the glossy, springy ball that I had anticipated. And my arms and hands were fatigued. Another five minutes passed, and my dough still wasn’t right, the kneading becoming more treacherous as the dough did indeed gain elasticity, giving me the sensation of wrestling in my kitchen with an angry octopus.

Then one by one, I received signs from the universe to give up the fight. First, there was the wedding gift of a stand mixer, whose very presence and powerful motor and dough hook rendered my efforts laughable. Next came my in-laws’ cast-off bread machine, which cut me out of the process altogether. Finally, there was the sudden popularity of Jim Lahey’s famed no-knead bread, whose knockout crust and chewy interior made kneading seem as antiquated and pointless as scrubbing laundry on a washboard. Amazing homemade bread was suddenly available without the requisite effort of energetic dough shiatsu.

If I was looking for some sort of sensual connection to my dough, I was going to have to find it elsewhere. Bread didn’t need me anymore. Lest you think me some kind of weirdo for craving a connection and wanting to work the dough with my own hands, there’s science to back up the pleasure—and its benefits.

“When we use our hands, we’re activating large parts of the brain,” says Dr. Marie Pasinski, a neurologist at Harvard Medical School and the author of Beautiful Brain, Beautiful You. “There are more sensory receptors in our fingers than in other parts of our bodies. For that reason, when using your hands, you are really stimulating sensory areas of your brain.”

Think of that scene in the French film Amélie when the protagonist steals a moment to surreptitiously sink her hand into a bag of dried beans, simply to enjoy the sensation. “We take our sense of touch for granted, but it’s one of our most malleable skills. It’s pretty neat that you can reach into your pocket and tell a quarter from a dime,” says Marie. Once you stop to think about it, indulging in feel-good activities for your hands might be the equivalent of treating your ears to an opera or your eyes to an art exhibit.

And the more you use your hands for these kinds of sensory tasks, the more you fine-tune their sensitivity, continues Marie. “People who play the piano, for example, have much more developed sensory and motor areas in their fingertips than someone who doesn’t play an instrument.”

There is plenty of evidence that this kind of hands-on work benefits every aspect of wellbeing. A 1999 study from the University of North Carolina at Greensboro found that a group of nursing home residents who regularly performed sensorimotor activities—from flower arranging to sewing—over 30 weeks improved their overall condition. This included having better physical mobility and lower levels of anxiety and depression than a control group. Once the sensorimotor activities decreased, so did their improvements.

Marie—who not incidentally learned a love of cooking and baking while waiting tables at a Hungarian restaurant known for pastries—also likes to emphasize the satisfaction that can come from looking at a finished product which didn’t even exist before your hands got involved. “The proud ‘I made that’ feeling is very powerful, and then you have this thing you can enjoy while eating it,” she says.

And so, I focus my fingertips elsewhere in the kitchen: dough, specifically pie dough, although any cookie dough that has to be formed and rolled out is a good candidate, too. Yes, fabulous pie dough can be produced in about two seconds in a food processor, but since the day I learned how, I have only made pie dough by hand. I always cited the reason as a practical one: I love to be the one who, during the “rental apartment at the beach” weekend, with little more equipment than a countertop and a wine bottle, makes and rolls out the crust for an improvised berry galette.

The sensual pleasure of making pie

And it’s true that by making dough by hand, I keep my skills sharp. But there is another reason: It is simply pleasurable to do so. To plunge my hands into the bowl of cool, whisper-weight flour, to rake my fingers through the grit that sugar and salt add. To rub in a cold stick of butter, first squeezing the stick until it breaks, then smearing its clammy chunks into the flour, alternating rubbing and breaking down the butter with several quick tosses to redistribute the crumbs in the bowl.

Finally, in goes the water. With a fork I scrape the mixture against the side of the bowl, and it satisfyingly clumps together. A few fold-overs, and it has turned into a mass. A few minutes ago, it was nothing. But now it has transformed and will later transform again into a delicious shell for some equally delicious filling. And that is so very gratifying.