Find out about how a creative San Francisco philanthropist is helping the city’s homeless population in a way that is truly transformative. 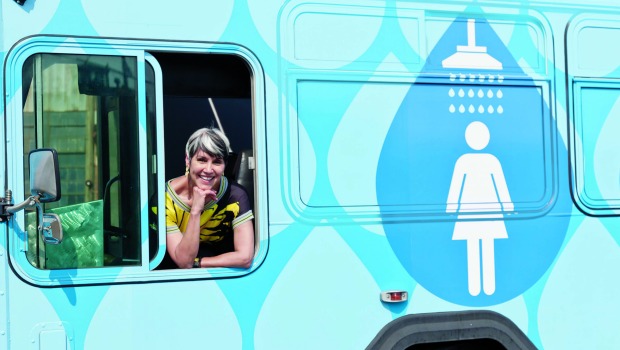 Doniece Sandoval and her team transform buses into clean showers.

Doniece Sandoval is in branding and marketing, yet her mobile-shower organization, Lava Mae, puts her squarely in the transformation business. She aims to provide her clients, the homeless San Franciscans who board her two retrofitted city buses for 15-minute showers, with the best possible experience under the circumstances.

You see one person go in and a totally different person come out, because they’ve washed away not only the dirt and the grime, but the symbolic feeling of unworthiness,” Doniece says. “They reconnect with a sense of dignity, humanity.”

San Francisco has an estimated homeless population of up to 7,300 and fewer than a dozen places where they can shower. Most of the shower facilities have only one or two stalls and limited days and hours of use. Doniece partnered with government and civic organizations and businesses to launch the first bus in June 2014. A little over a year later, she added another bus and plans for two more by the end of this year. Her goal is to provide 50,000 showers each year, helping to fill the growing need in a city with the highest rental prices in the nation.

Recently Lava Mae served a 94-year-old woman who had been evicted from her apartment. Quite a few clients have jobs and are living out of their cars. The one thing they share is gratitude, something Doniece finds humbling. “They come out, and they are just like ‘Thank you’ or ‘That was beautiful,’ ” she says.

“Watching the impact that Lava Mae has on those we serve brings up so many emotions for me: pride in what we’ve created, happiness as I watch people emerge with huge smiles and a sense of peace from their showers, and sadness as I know that they’re going back to their life on the street for however long that lasts. It’s driven home for me how fortunate I am and deepened my commitment to doing more.”

Go to lavamae.org for more information.