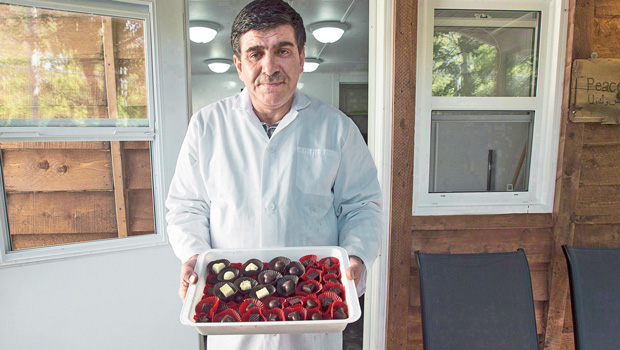 Isam Hadhad shows off a tray of chocolates in his Antigonish, Nova Scotia factory.

For a Syrian refugee family now living in Canada, the link between chocolate and happiness is especially sweet. More than three decades ago the family’s patriarch, Isam Hadhad, made a dramatic career switch from civil engineer to chocolatier. He got into the chocolate-making business precisely because he realized how much joy it could bring people, explains his 26-year-old son Tareq.

“He wanted to make the world a happier place,” says Tareq, who speaks English and is his family’s spokesperson. “(My father) says that if you want to build a connection to someone, you go and give him a piece of chocolate.”

Then came the war in Syria and the family lost their chocolate factory—the second largest in the Middle East—to a bombing. But just two years after arriving in Canada as refugees, they have rebuilt with the help of a small, rural community in their adopted home country. Naming their new venture “Peace by Chocolate,” the family is using their success as an opportunity to serve up peace and happiness in each bite.

“We feel that in every piece of chocolate we make, there is a taste of peace,” says Tareq. “We left our home because we lost peace in the community, in our homeland, so we felt that we should promote this great value in our new home country.”

After fleeing Syria in 2013, the Hadhad family lived for three years in Lebanon, reminded every day of what they had lost. What they didn’t know was that a tiny town on Canada’s East Coast was preparing to welcome them.

When they heard about the Syrian refugee crisis, volunteers in Antigonish, Nova Scotia, decided to sponsor a family to come to Canada. Community members raised money, rented a house and recruited volunteer translators and English teachers.

“It was a tremendous, overwhelming response from the community. People all wanted to contribute,” says Lucille Harper of Syria-Antigonish Families Embrace, the organization that sponsored the family.

The Hadhad family arrived in Antigonish, a college town of just 10,000, in the dead of a Canadian winter. But it wasn’t long before they had proved their resilience. Just two months after arriving, Isam started making chocolate out of their rented home and selling it at local farmers markets.

Soon, he needed more space for production, and local carpenters, plumbers and electricians all volunteered their time to help build him a tiny shop. Business boomed, and finally, in September of 2017, the Hadhads opened a real factory.

As the family found success in their new home, they made giving back a core part of their company’s mission. When wildfires ravaged the town of Fort McMurray in Western Canada, they donated some of their profits to support those who had lost their homes.

Shipping across Canada and making plans for U.S. distribution, Peace by Chocolate also quickly began making an economic contribution to a region that traditionally lags behind the rest of the country. The company has created jobs for more than two dozen employees.

The Hadhads’ ambition of spreading peace and happiness through chocolate has already stretched beyond Canada’s borders. In 2016, Prime Minister Justin Trudeau shared their story at a United Nations summit on refugees as an example of the contributions newcomers have made to the country.

Tareq says he hopes the company’s efforts will help to counter the bias and xenophobia that refugees often face around the world. “Whenever anyone hears any negative stories, they should check out Peace by Chocolate’s story. They will learn more about how kindness begets kindness.”