The Birthday Party Project organizes parties for kids living in homeless shelters. Find out how you can get involved. 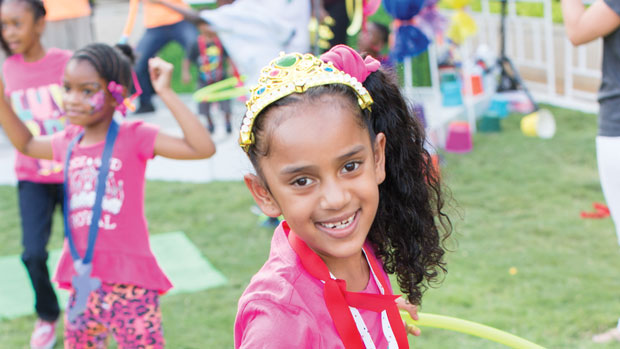 Non-profit throws parties with all the fixings for children living in shelters.

Each month, 31 homeless shelters across the country serve as the backdrop for children’s birthday celebrations, transforming into magical settings where dance parties, spirited renditions of “Happy Birthday” and gleeful squeals combine to form just the right amount of controlled chaos.

The organization behind the magic is The Birthday Party Project (TBPP), a North Texas-based nonprofit with event planner Paige Chenault at the helm. Its mission? To throw birthday parties for kids in homeless shelters—an idea that was originally sparked in Paige during a flight in 2008. Running her own successful events company at the time, Paige was pregnant with her daughter, Lizzie. As she read an article about kids’ birthday parties, she grew excited at the possibilities for Lizzie. On the same flight, she picked up another magazine and flipped to an image she says she’ll never forget: a young Haitian boy with sunken eyes, standing barefoot and shirtless in a crowded street but seemingly unnoticed.

“Here I was dreaming about all the things I could do for Lizzie, and someone like him will never feel celebrated the way I knew I could celebrate her,” Paige says. By touchdown, the seeds of TBPP were planted. “I realized I could use my talents to throw birthday parties for kids who need it,” Paige says. “I felt in the core of who I was that I was being called to this.”

Fast-forward to January 2012: TBPP hosted its first party at Family Gateway, a homeless shelter in downtown Dallas, committed to throw one bash each month there for the entire year. Paige, along with her husband, Colin, and a group of 15 close friends, entered that first event excited but unsure of what they were about to do. “We wondered if the kids would even like us,” Paige says. Luckily, the bracelet-making, balloon keep-away and spontaneous dance party helped win over the 50 children in attendance. After the party ended, 11-year-old Micah, whose demeanor had shifted from reserved to free-spirited, said, “Thank you, Miss Paige. This is the first birthday party I’ve ever had.” That powerful moment stuck with Paige. “I knew we were on to something great,” she says. 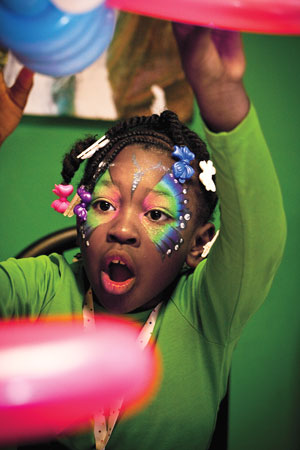 Five years later, TBPP now partners with 31 homeless and transitional living facilities in 12 cities. Each month, shelters identify children ages 1 to 18 who will be celebrating a birthday. Paige, a team of six employees and an army of volunteers—dubbed “party enthusiasts”—then plan a group party, complete with an individual cake and gift for each birthday boy or girl. All of the children staying at the shelter, as well as parents of the guests of honor, are invited to attend the one-hour celebrations.

Annie Fernandez, director of magic for TBPP, devises each month’s party theme: “Art Party,” “Mad Science” and “Olympics” have all made the lineup. This March, the theme is “Spring Fling”—think relay races incorporating gardening tools—while April brings “Superheroes,” giving kids the chance to create their own masks.

Last December, 9-year-old Alicia celebrated her birthday at People Serving People in Minneapolis. A memorable moment? Teasing a staff member dressed as Frozen’s friendly snowman, Olaf, she said she was going to “eat his carrot nose with ranch.”

The birthday parties can leave a lasting impression on the parents, too—just ask Lakechia Thompson, whose 3-year-old son, Kaden, celebrated his birthday at Detroit’s Coalition on Temporary Shelter.

“The best part was the intent—to make the children feel important, regardless of their circumstances,” Lakechia says.

To date, TBPP has celebrated about 3,400 birthdays, leading Paige to focus on the organization full time in 2014. This year, TBPP aims to increase its number of monthly parties from 31 to 45, helping spread joy to more of the country’s 2.5 million homeless children. Plenty of ways to get in on the magic await: Besides volunteering at a party, “sharing” your birthday is also an option. Instead of asking for presents on your birthday, collect gifts for TBPP, or set up a fundraising page on their website.

“Every week, the children ask, ‘Is this the week of the birthday party?’” says Kathy Kidwell, director of community engagement at Family Gateway. “It’s life-changing changing for them—there’s nothing like it. It’s priceless.”

Find out how you can get involved with The Birthday Party Project.