Happiness Around the World

Abandoned as an infant on the streets of Calcutta, India, Jayme Illien was adopted by a woman in the United States. His mission, he realized, was to share what he believes to be the purpose of life: happiness. 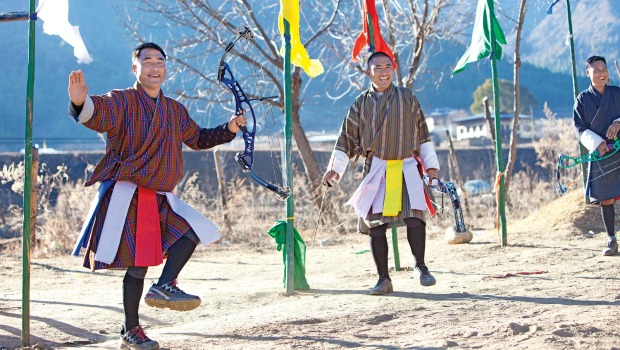 The quest to thrive in life goes beyond age, country, belief and circumstance.

Abandoned as an infant on the streets of Calcutta, India, Jayme Illien was taken to Mother Teresa’s International Mission of Hope orphanage. There, by chance, someone knew of a woman in the United States desperately wanting to adopt a child.
“My adopted mother got a call on her 45th birthday saying, ‘We have a baby for you,’ ” he says. Anna Belle Illien not only adopted Jayme, but after experiencing the challenges of the process firsthand also founded Illien Adoptions International, a nonprofit that has helped thousands of American parents navigate the international adoption process.
“What I saw as I traveled with her were thousands of children (in orphanages) who were just like me,” says Jayme, who is now an adviser to the United Nations and founder of Illien Global Public Benefit Corporation, which works with business, governments and different segments of society to promote a message of happiness. “I realized how fortunate I was, and that became my inspiration to do something about it….I felt a responsibility to do something with what I’ve been given.”
His mission, he realized, was to share what he believes to be the purpose of life: happiness. And while the definition of happiness is as unique as we are, our ages-old quest for it is universal, going beyond age, country, belief and circumstance.
Yet it has only been in the last decade that psychologists and scientists began taking a closer look at why happiness results in more than smiles on our faces; rather, why there is an undeniable link between our happiness and improved health, longevity, relationships and success at work. And, on a grander scale, how our government’s policies, our nation’s economic health and even communities’ decisions can shape and affect our wellbeing and happiness.

In China, a country that has experienced record levels of economic growth in the past two decades, the shift to focusing on well-being was not so much a choice as a necessity. An increase in suicides caught the government’s attention, says Kaiping Peng, Ph.D., dean of China’s Tsinghua University’s psychology department. In short, life satisfaction had plummeted. And China wasn’t alone. Post-World War II Japan, where incomes quintupled in three decades, and Korea, during its period of brisk development in the 1950s and ’60s, shared similar experiences, says Carol Graham, Ph.D., author of  The Pursuit of Happiness: An Economy of Well-Being.
“From a policy perspective, from a human welfare perspective, it’s important to understand that these kinds of progress boosts can also have negative externalities for people,” Carol says. “We are beyond a world where more and more income is the be all and end all.”
Kaiping sees China’s satisfaction challenges as a byproduct of economic growth and resulting rapid urbanization. The country is countering that by encouraging the rising popularity of positive psychology studies, including collaborating with other countries on the topic and establishing the Happy City movement.
One city participating is Jiangyin, about 90 miles northwest of Shanghai. Since it initiated the Happy Jiangyin Project in 2006, which aims to improve people’s lives by increasing their economic opportunities and creating a healthier environment, Jiangyin has seen its citizens’ well-being increase two to three points every year. Among the initiatives resulting from the project was the addition of industrial and agricultural parks in the village of Huaxi, earning it the nickname “the first village under heaven.”
“We have come to understand what Buddha told humanity more than 2,000 years ago: Money alone does not buy happiness,” says Jeffrey Sachs, Ph.D., renowned economist and senior U.N. adviser. “To achieve happiness, we need healthy societies, honest governments, social trust, and honoring and protecting the natural environment.”
Jayme agrees. “Monitoring only economic growth is not the right way to run a country,” he says. “That’s like having a car and only having a speedometer—there are a
lot of complexities, a lot of other factors that enter in.”

The Science of Happiness

For the United Kingdom, happiness was political. And in the wake of the economic crash of 2008 came a moment of readjustment, a window of opportunity that the happiness movement easily filled.
“I think part of that was going beyond the kind of narrow view that the things that matter in life are the things you can count, or the things that have money attached to them,” says James O’Shaughnessy, who served as Prime Minister David Cameron’s director of policy and research. He credits the growing interest in well-being to the scientific element the measurements bring to the discussion, a belief Timothy Sharp, Ph.D., shares. Timothy, author of The Happiness Handbook and founder of Australia’s The Happiness Institute, says happiness has always interested philosophers and religious leaders, but today, the topic is piquing the interest of a broader range of people, from accountants to veterinarians and entrepreneurs.
“The crash forced a complete recalibration of expectations, confidence in what it is we’re trying to achieve with economic growth,” Carol says. And while the concrete effects of the happiness movement in Great Britain are hard to pinpoint, James says, a change in attitude is evidenced by the launch of the What Works Centre for Wellbeing in late 2014. The independent organization, funded in part by the British government, includes a number of centers throughout Great Britain dedicated to “understanding what national and local governments, along with voluntary and business partners, can do to increase wellbeing.”
With more organizations starting to study people’s well-being, including Australian Unity in Australia, the Happy Planet Index and the French-based Organization for Economic Cooperation and Development, we’re seeing metrics that offer a new take on more traditional economic indicators, like the closure of rural post offices across the U.K.
Carol explains that, economically, the post offices were a drain, but wellbeing metrics revealed they were the highlight of the day for many isolated elderly residents. The information didn’t dictate policy. “But what it does,” she says, “is it says if you close the rural post offices, it’s very likely to have these negative costs, and you kind of address those some other way.”

A Movement in Motion

The happiness movement, says Jeffrey, a co-author of the “World Happiness Report,” “is a call on our governments and our societies to get our priorities right, to adopt holistic goals such as sustainable development and to monitor the expressed levels of happiness in society, so that we can know when our society needs reforms to achieve happiness.”
Each year the “World Happiness Report” ranks the happiness of people in more than 150 countries based on gross domestic product, life expectancy, having someone to count on, perceived freedom to make life choices, generosity and freedom from corruption. In both the 2012 and 2013 reports, researchers cited mental health as the single-biggest factor affecting happiness across the board.
“A lot of problems we have as a society are because of individuals not being happy,” says Jayme, now an International Day of Happiness representative. “Global happiness and change start with personal happiness.” Knowing this, Jayme and photographer Joseph Peter, who spent four months in Africa capturing “moments of happiness,” came up with an idea for a U.N. resolution that would recognize the pursuit of happiness as a “fundamental human goal” and ask countries to consider happiness and well-being when measuring and planning their social and economic development.
With the help of the then-ambassador of Iraq to the U.N., Hamid al-Bayati, Ph.D., the resolution went before the General Assembly president in 2011 and then the General Assembly to be adopted by general consensus. The resolution passed immediately.

The following year, in June 2012, the General Assembly declared March 20 International Day of Happiness, “recognizing the relevance of happiness and well-being as universal goals and aspirations in the lives of human beings around the world and the importance of their recognition in public policy objectives.”
And since the first celebration of International Day of Happiness in 2013, the holiday has gained more and more awareness in the public consciousness, furthering Jayme’s hopes for promoting happiness globally. “[International Day of Happiness] calls out that we’re all part of the same species; we’re all connected,” he says.
“Living a happy life and thinking about your own happiness is so important. Having one day to be aware about it is a big step in making it something you do every day.” A Brighter Tomorrow Creating a happier planet won’t happen overnight, Jayme acknowledges, but today, many people around the globe are working together for this cause—and that’s a powerful start. “We are at a turning point where this isn’t just possible, it’s critical,” he says.
He believes a holistic framework that incorporates happiness as an international policy, and provides a well-thought-out process with universal goals, truly can change the trajectory of our future.
“How does the work of peace and security get done?” he asks. “Slowly. You don’t move the entire planet in a couple of days. It’s more of a change that happens over time as people begin to value other things. “What we’re realizing around the world is that there are a lot of goals that unite us, and we really should work on those.”
(Visited 450 times, 1 visits today)
Popular Articles