The “Sweetest Place on Earth” seemed like a necessary stop; we figured the chocolate community would be a great place to find happy people. 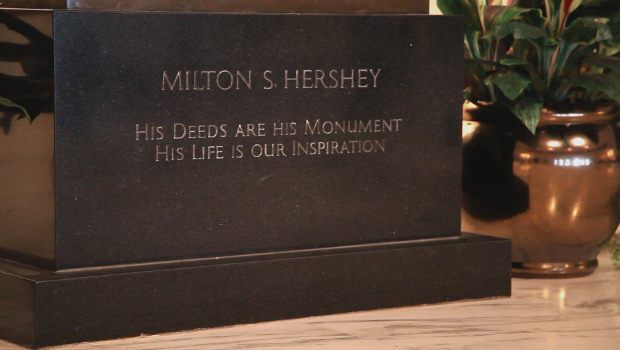 During our travels, we have found that one of the most important indicators of how happy someone will be is how involved in their community they are. In this post, I want to discuss one type of community – the very literal community of a town – and how one member derives a great amount of joy and meaning from getting involved.

If you’re staring at a map of Pennsylvania – which is exactly what Adam and I were doing a few months ago – you’ll undoubtedly see a familiar word, synonymous with happiness: Hershey. Who doesn’t love chocolate? Through my own independent research, I have proven that it is physically impossible to frown while eating a Hershey’s bar. The “Sweetest Place on Earth” seemed like a necessary stop; we figured the chocolate community would be a great place to find happy people. We were 100% right for 100% the wrong reasons. 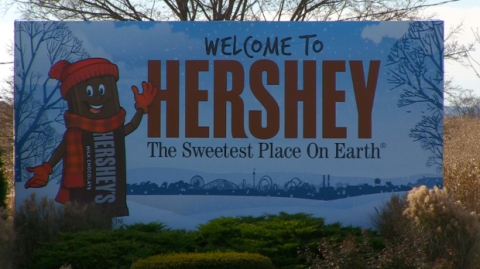 The real heart of Hershey, PA comes from the man for whom the area is named, Milton Hershey, and the community that has sustained his incredible gift of love.

Perhaps due to their inability to have children, Milton and his wife founded the M.S. Hershey School, which today is the largest residential education institution in the US. The school serves nearly 2,000 boys and girls, many of whom came to the school as a result of unfortunate life circumstances. When Mr. Hershey passed, he left his entire fortune to the school, and this trust also has controlling interest of The Hershey Company. Education was much more important to Milton than chocolate and he wanted to make sure that the school flourished, even if the chocolate company did not.

Although he passed away in 1945, Milton Hershey’s spirit is still the lifeblood of Hershey, PA. Everyone we spoke with expressed a deep connection with the community, both with the school and through the mission of doing good and providing care to those who need it most.

One is only happy in proportion as he makes others feel happy.” – Milton Hershey

Our main contact in Hershey was Dr. Tom Davis, a retired plastic surgeon and Vietnam Veteran who came to Hershey after returning from the war. Tom also seems to believe that one derives happiness from making others feel happy. He willfully went to Vietnam to provide medical care to his fellow Americans, and although he no longer practices in the states, spends a few weeks out of the year traveling to developing nations to provide care to children in need.

When we met with Tom, he toured us through his home and showed off many of his medals, achievements, and accolades. “It was a difficult time in America and people were not necessarily kind to those of us returning from Vietnam,” Tom remembered as he thumbed through photos of his time in the army. “When I came to Hershey, there was an American flag on every light pole and people welcomed me in a way I had never experienced before.” His eyes began to tear up as he told us, “I felt like I was home.”

Tom was giddy to drive us around town. It was hard to believe he did not grow up in Hershey; his energy and excitement for every building lead us to believe he had deep roots in the town. But he did not. In fact, Tom never married or had children – he was the only Davis in Hershey – but he felt a sense of belonging that I have never witnessed before. He, like so many, had adopted the entire town as their family.

When he brought us to the school, he spoke about the Grandfather Program, which he founded. The program allows students and senior citizens to spend time together – reading, playing games, cooking – thus further increasing the strong ties in the community. We talked in the main lobby for a good amount of time, interviewing the staff–all of whom expressed just as much love and fulfillment from being a part of the Hershey community as Tom.

We eventually made our way over to a statue of Milton, where we asked Tom to read the inscription at the base. He had a hard time getting through it without choking up: 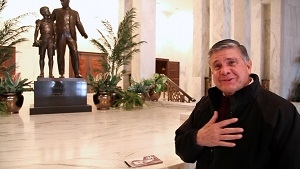 His deeds are his monument. His life is our inspiration.

Hershey, PA is a beautiful example of the power and importance of community. There is something self-sustaining about Hershey: when you hold acts of service up as one of the main pillars of your community, you create intricate and meaningful relationships that foster really beautiful lives.

As an outsider who came into the community expecting nothing but sugar highs, I was at first pleasantly amused, but the more time I spent, the less I wanted to leave. I began to reflect on how uninvolved and detached I am from my own neighborhood and how badly I wanted that to change. It’s no secret that giving back is a tried and tested key to finding happiness, but spending time in Hershey was a great reminder of just how deep and meaningful that happiness is – sweeter than chocolate, some might say.