To celebrate his 80th birthday, the 14th Dalai Lama of Tibet is inspiring sold-out audiences with his message of love and unity. 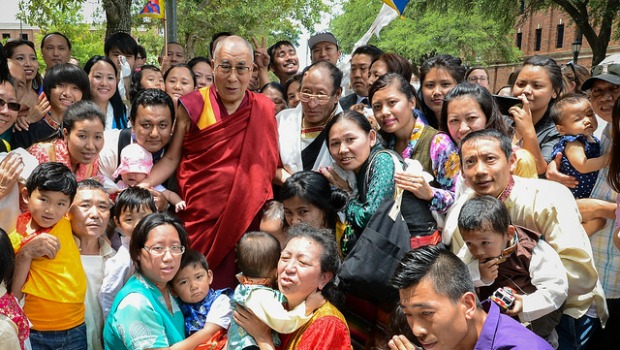 Hundreds of white balloons fell from the ceiling of Moody Coliseum at Southern Methodist University in Dallas last week as the audience stood to sing “Happy Birthday” to His Holiness the Dalai Lama. The Dalai Lama grinned and bowed.

“Every day should be happy day,” he said.

The 14th Dalai Lama of Tibet and spiritual leader visited Dallas as part of a tour celebrating his 80th birthday and inspired the sold-out audience with his message of compassion, happiness and love. Speaking without notes, His Holiness touched on each human’s capacity for destruction, anger and fear, but always returned to his central theme of the importance and power of compassion and love. 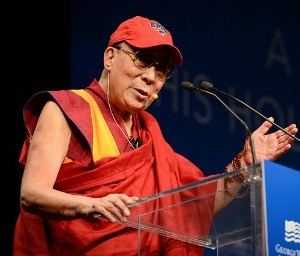 “A lot of problems we are facing are of our own creation,” he said. “But the basic human nature is always compassion.”

Wearing an SMU baseball cap with his crimson and gold robe, the Dalai Lama peppered his talk with smiles and his infectious laugh, tilting his head after making a strong point.

“This was my second time to see the Dalai Lama and he has a great message of love and empathy,” said Jason Wright of Dallas. “But the best thing, in my opinion, is just to hear him laugh. It’s the best laugh I’ve ever heard and it makes me happy.”

His Holiness had simple advice for making the world a better place by recommending more friendships based on taking care of one another, teaching warm-heartedness in schools and more women in leadership.

“If females took on more roles in leadership, perhaps the world would be more peaceful.”

Read about the book the Dalai Lama is writing with Desmond Tutu.

The Dalai Lama has received high honors for his devotion to peace, including the 1989 Nobel Peace Prize. He became the 14th Dalai Lama at age 2 and began his monastic studies at age 6. He assumed political power over Tibet in 1950, but following the 1959 Tibet uprising, fled to India where he has remained in exile. He served as head of state of the Tibet government-in-exile until his retirement in 2011.

At the end of the day, we are all the same

I’m just one out of 7 billion human beings,” he said. “All human beings—emotionally, mentally and physically—we are the same. We all have the same right to achieve a happy life.”

After His Holiness left the stage, ABC news correspondent and moderator Cokie Roberts stepped to the lectern to close the event. But before she could speak, the Dalai Lama poked his head through the curtain and gave the audience just one more smile.