Each week, Live Happy Radio presents #HappyFacts designed to enlighten, educate and entertain you. This week we explore the power of veggies, the value of a good night’s sleep and the link between flowers and happiness. 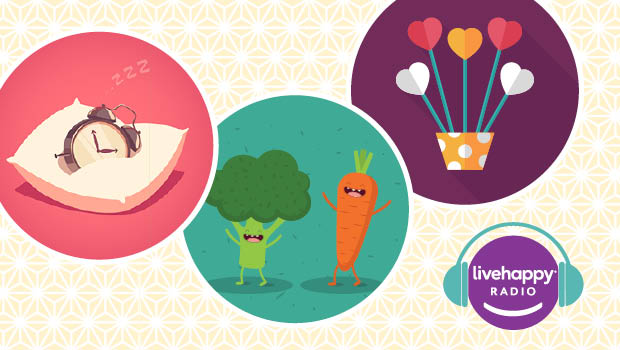 Inspired by the Live Happy Now podcast, which debuted as a #1 New and Noteworthy podcast on iTunes in 2015, the new one-hour Live Happy radio show will air Sundays at 8AM CT on 98.7 KLUV-FM in Dallas and can be heard nationwide on Radio.com.
Each week, Live Happy Radio presents #HappyFacts designed to enlighten, educate and entertain you.
Here’s a look at what we’re talking about this week:

You heard it from your mom dozens of times: eat your fruits and vegetables! But it turns out she wasn’t just helping you build a healthy body, but helping to bolster a happy mind, too.
In a newly published study, researchers from the University of New Hampshire followed college students over a four-week period and found that those who increased their intake of fruits and vegetables also reported feeling greater well-being. This was true regardless of whether they also consumed coffee, sugary drinks or alcohol.
Based on the overwhelming results of the study, researchers say they are now able to look at how fruits and vegetables can be used to influence happiness habits, such as kindness and gratitude. So if you’re feeling grumpy, all you need to do is eat your greens!
Read more about the 5 foods that can help boost your mood

If you’ve ever woken up from a great night’s sleep and thought, “Man, I feel like a million bucks!” you might not be that far off base. UK researchers at the University of Warwick found that getting good, quality sleep has the well-being equivalent of winning a £200,000 jackpot (about $258,000 USD).
A lack of sleep, getting poor quality sleep or the use of sleep medications all were associated with lower well-being and less happiness.
Part of the association to happiness could be because sleep affects our amygdala, where we do our emotional processing; that’s why we feel short-tempered or angry when we don’t get enough sleep. (“I’m not mad at you, my amygdala is!”) It also takes a toll on the hippocampus, where our memories are stored, which results in that foggy feeling and poor memory that comes with lack of sleep.
Even the researchers in New Hampshire, who studied fruit and vegetable intake, found that out of four health behaviors—sleep quality, exercise, smoking and fruit and vegetable intake—sleep quality was the strongest predictor of happiness and positive affect.
So imagine how happy you’ll be if you get great sleep AND eat your Brussels sprouts!
Read more about how to get to sleep and stay asleep

It’s no secret that flowers make women happy. (Especially on Valentine’s Day when they are delivered by the dozen.) But did you know that flowers can bring a smile to your face that reaches all the way into your brain?
In a study from Rutgers University, women who were given a flower smiled what’s known as a Duchenne smile (the kind where your eyes crinkle and your lips curl up). That type of smile has been previously linked to positive emotion and neural activity, and those who received flowers also reported feeling happier and more social.
Different versions of this experiment have shown that receiving flowers has a lasting effect on an individual’s happiness, and, among older research subjects, it also has a positive effect on memory. So next time you decide to stop and smell the roses, why not buy them and make someone’s day?
Watch a video about giving random acts of flowers
(Visited 16 times, 1 visits today)
Popular Articles