#HappyFacts: Money Can Buy You Happiness 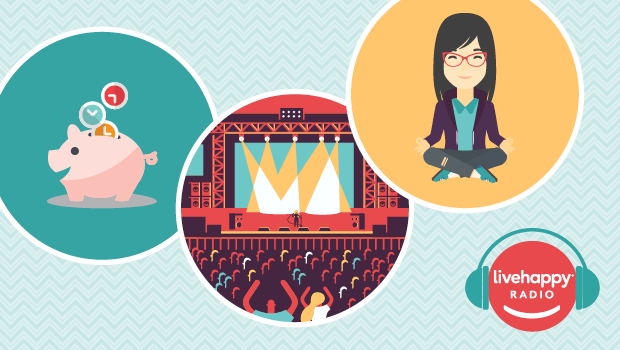 Each week, Live Happy Radio presents #HappyFacts designed to enlighten, educate and entertain you. Here’s a look at what we’re talking about this week:

Can’t get no satisfaction? Go to a concert!

If you need a quick pick-me-up, catching some live music can do the trick. But now researchers have found that going to live shows can make a lasting difference.

In a study of 1,000 adults in Australia, those who regularly went to live music shows were found to have a greater sense of subjective well-being, or life satisfaction. While music in any form has been shown to have positive effects on our well-being, researchers found a notable difference between those who engage with others through live music events and those who listen to recorded music alone.

Is it the social connection with other music lovers? The tendency of live music to encourage you to be in the moment? Researchers aren’t yet sure, but they are now convinced that a little live music is good for you in more ways than we have realized in the past.

Employers who want happier, more productive employees might want to invest in some meditation training. Around the globe, corporations have started using meditation as a way to soothe the stress of the workday and help employees become calmer and more productive.

In the UK, the Bank of England began offering mindfulness and well-being courses as part of their “working life seminars” about four years ago. They, along with such companies as Unilever, KPMG and Goldman Sachs, offer meditation and mindfulness training, and regularly encourage employees to use guided meditations and apps to help them shake off the stress of the day.

Science shows a direct correlation between happy, healthy employees and productivity. It improves creativity and collaboration between employees, creating a competitive advantage for businesses.

Since mindfulness and meditation can help change the way employees think about and react to stress, it creates the healthy, happy employees needed for that winning edge. And both the employee and the company benefit from it!

The old saying goes that money can’t buy happiness – but now it appears it can … if you know how to spend it right!

In a world where we are increasingly pressed for time (and openly stressed out about it), being able to pay someone else to do a dreaded or time-consuming task may be the best way to spend a hard-earned buck or two.

The exception came when people paid someone to do a task for them, but then spent that extra time working or doing something equally stressful. The key to making the most of the time you buy is to get out there and do something you enjoy.

What is one thing you could pay someone to do that would increase your happiness?