#HappyFacts: The Older You Are, the Happier This Will Make You 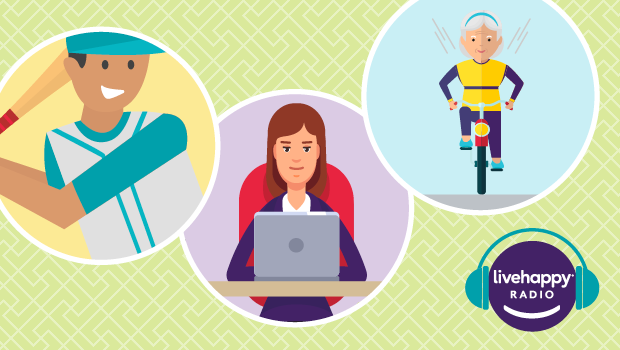 Each week, Live Happy Radio presents #HappyFacts designed to enlighten, educate and entertain you. Here’s a look at what we’re talking about this week:

Exercise is a proven mood booster, thanks to the way it releases endorphins and helps fight feelings of stress. But now researchers at Gallup have found that these effects are magnified in adults 65 and older, which means that along with that senior discount at the gym, you can get nearly five times as much joy from your daily movement.

While people under the age of 30 who exercise three or more times a week report a bump in their optimism level by about 6 percent, people over the age of 65 who did that same amount of exercise had about 32 percent greater optimism.

This finding reinforces a growing body of evidence about the mental and emotional effects of exercise, although it wasn’t previously known that it could have a greater impact on older adults. Researchers say one possible reason for this is that your metabolism slows and your physical health declines as you age, so there’s greater room for improvement among older adults. And, since exercise is more closely tied to health than either diet or smoking in older adults, it appears the best thing you can do for your brain and your body is to get up and move.

It turns out that exercise isn’t the only thing that affects you differently as you age; work does, too.

More specifically, what makes you happy at work changes dramatically over time. Research published in the Journal of Happiness Studies found that younger workers who are new to the workforce view wages as the primary factor in job satisfaction. However, as we get older, wages and a positive attitude were both important to achieve happiness on the job.

One theory is that younger adults haven’t yet found their place in the working world and are still searching for their preferred place of employment, so they look at their job as a paycheck rather than a purpose. Older workers who have found their calling and have settled into their desired jobs now want more than just money; they want meaning and a positive work environment, too.

Smile if you want to live a while (longer)

Smiling lets people know you’re happy or amused, but this simple act can also improve your health and lower your stress levels.

When researchers studied the smiles of Major League Baseball players from the 1952 player registry, they found that players who had a more authentic, spontaneous expression also lived longer. Those who were not smiling in their photos lived an average of 72.9 years, while those with partial smiles lived, on average, 75 years. But those who had big, authentic smiles reaped the rewards by living an average of 79.9 years.

This could mean that, in addition to all the other benefits of smiling, it could actually help promote a longer, healthier life; happy people have a 35 percent lower risk of death than their grumpy counterparts, and, let’s face it, they’re just more fun to be around.