Despite multiple tragedies, John Lawson is one of the most upbeat—and funniest—people we’ve ever met. 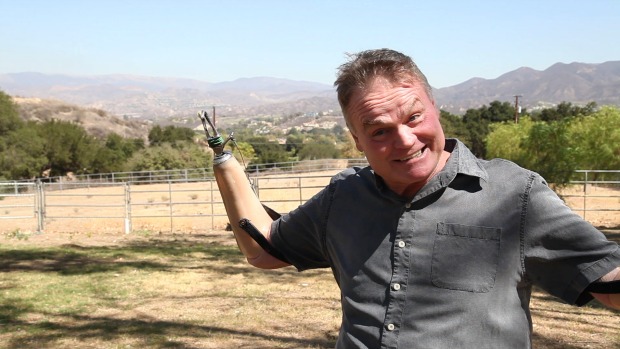 Adam Shell and Nicholas Kraft are traveling the country to find our nation’s happiest people, all while filming the experience to share with audiences in Pursuing Happiness, a feature-length documentary.

John Lawson shows us what resilence is all about

There’s a stereotype about comedians: they’re all bitter. It’s the updated version of the sad clown who spreads laughter to others while drowning in misery on the inside. There is humor in misery, and sometimes it takes those who have it the worst (or at least feel as though they have it the worst) to enlighten and poke fun at the world.

If this is true, then John Lawson must be the funniest man in America. The universe has dealt him more than his share of misery: When he was 30 years old, a surge of electricity arced to a pole he was using to paint a water tower, frying his arms and chest before exiting through his butt cheek. He spent four months in recovery at the North Carolina Jaycee Burn Center and was finally released after learning to operate two metal hooks. The effects of the accident reached further than the immediate physical damage: John’s marriage fell apart and his dreams of pursuing a career as a singer and piano player seemed impossible.

One tragedy followed by another 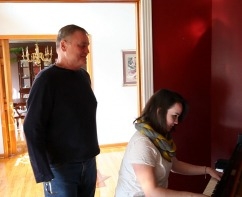 A friend reminded John that his hands were amputated but not his voice, and while performing in a musical, he met Deborah, the love of his life. The two were quickly married and gave birth to Whitney, now an accomplished Miami University graduate. When Whitney was two, her mother was diagnosed with terminal breast cancer,which she succumbed to fight eight years later. During that time, John’s artistic pursuits were shelved in order to take his most important role: single dad.

John is indeed one of the funniest people we’ve met in our pursuit of the happiest people in America. But contrary to what one might assume, he is anything but bitter and wallowing in misery—he’s one of the most upbeat people we’ve ever come across. In fact, it was John’s great sense of humor that lead us to him. Years ago, he and Whitney attended a screening of our last documentary, Finding Kraftland, which was showing near their home in Fairfield, Ohio. The bond between the father-son duo in the film was so similar to John and Whitney’s relationship that they reached out to us and formed an e-friendship. It became apparent that should we ever find ourselves in Ohio, we’d have great company.

So when it came time for Pursuing Happiness to travel through the Midwest, we put Fairfield on our map! Our reason for spending time with John was not because of his tragedies (most of which we did not know about when we went to meet him), but rather his incredible presence, sense of humor, and lust for life. His infectious laughter and incessant upbeat attitude were something we wanted to experience and capture on camera. We were, of course, curious to learn how someone who experienced such tragedies could find so much humor in life, and John, like many survivors we’ve interviewed, reminded us that it is easier to weather a storm with a positive outlook.

“When I was recovering in the hospital, the nurses used to all hang out in my room because I would make them laugh,” John told us, as he recounted his months in recovery after losing both arms and half his derriere. “You know, when people tell me I’m doing a half-assed job, they have no idea how right they are!”

He shared stories of his recovery in the hospital the same way people enthusiastically recount stories from college. It would be too easy and incorrect to say John was looking for the silver lining in things—trying to make light of a bad situation—he genuinely seemed to have fond memories of the experience.

“The doctors and psychiatrists said I was a classic case of denial, and predicted that I would have a complete mental breakdown within two years,” he told us. “That still hasn’t happened, which is a shame because it’d be kinda be nice to have a nervous breakdown … I could use the time off!” 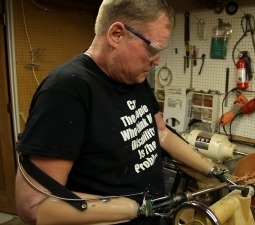 When you proudly walk around with two metal hooks instead of arms (John often wears short sleeves), you encounter a lot of questions from curious strangers. Others might become bitter or avoid contact, but it’s John’s nature to entertain, and he seems to take these interactions as an opportunity to connect in a positive way. “I know what you’re going to ask,” he’ll joke to someone stumbling with an awkward question, “and the answer is ‘carefully, and with a lot of toilet paper.’”

John is, to his knowledge, the first double amputee to be certified as a SCUBA instructor. “It was something I wanted to do and it never crossed my mind that I couldn’t,” he told us after joking about how easy it is to catch fish with his hooks. We admired the photos of John effortlessly exploring the waters before our attention shifted to another framed photo and certificate.

“Oh yeah!” he laughed, realizing he had forgotten to mention that he was also a certified pilot. “When my wife was diagnosed with cancer, it was faster to fly to her treatment than to drive, so I went out and earned my pilot’s license.”

Making the choice to be happy

John’s best guess as to why he’s remained so positive throughout so many tragic events is he was simply born that way, which very well may be true. (Positive psychologist Martin Seligman estimates that our experience of positive emotion is about 50% genetic.) But that only explains part of his amazing resilience. He has also made a choice to be happy, and has adopted the kind of healthy attitudes and habits that complement his inborn positivity and sense of humor. “I choose not to focus on the things I can’t do” John reasoned, “In fact, I don’t ever think there are things I can’t do.”