Nine-year-old Alex Múnoz wrote a letter to the CEO of KIND Snacks–and got something unexpected in return. 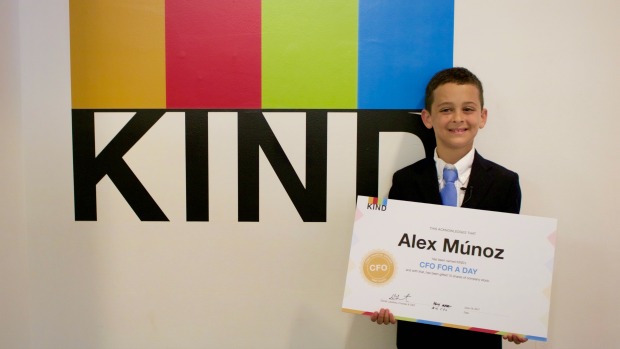 At 9 years old, Alex Múnoz of Weston, Massachusetts, has already set his sights on investing in his first IPO. He wanted to put his money in the KIND Snacks company. Not only does he love their peanut butter dark chocolate bar, but Alex also saw a promising future for KIND because of its focus on healthy ingredients. Plus, the company culture promotes being kind to others—a quality Alex admires.

But unlike many kids his age, Alex took action on his wish and wrote a letter to KIND Founder and CEO Daniel Lubetzky, asking when he was planning to take his company public (and smartly making a social and business connection, too).

“I’ve been researching your company and want to invest,” wrote Alex. “I will be getting all my money at my bar mitzvah. Do you know when you will go public? I think you will do well. I like your idea of public action and supporting charities.”

Daniel loved Alex’s letter and invited him to visit the KIND corporate offices on 37th Street and Broadway in New York City on Monday, June 19. Live Happy was on hand to cover Alex’s big day.

Big Day in the Big Apple

Alex, accompanied by his mother and sister, arrived wearing a sports jacket and tie. First, he was promptly asked to taste-test KIND products with the guidance of John-Claude Lacroix, the company’s new product development coordinator. Between sips of water to cleanse his palate, Alex tasted a variety of classic and new flavors, declaring the majority of them “Alex-approved.” 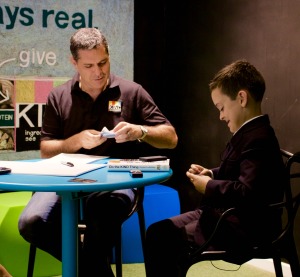 Next, Alex met CEO Daniel, who lives by the ideals of Live Happy. Not only does he spearhead the healthy snack company, Daniel is also the founder of The KIND Foundation, which has inspired more than 1 million acts of kindness since 2004, as well as PeaceWorks, an organization that fosters cooperative ventures among neighbors in the Middle East.

Daniel greeted Alex warmly and presented him with the honorary title of “CFO for the Day,” along with 10 shares of company stock. Earlier, Alex had said he was only expecting a coupon or something small in response to his letter.

Although KIND currently has no plans to go public, Daniel considered Alex’s reasoning to do so very thoughtfully. “We decided we wanted to stay private because we want to think long-term,” Daniel told Alex. “However, we are facing many challenges and were really motivated by your passion for KIND. So we had to come up with some sort of solution. We are so energized by your visit all the way from Massachusetts, so we wanted to give you some surprises [such as being CFO for the Day].”

“In the car, my mom and I talk sometimes about investing and stocks,” Alex told Daniel. “I thought of KIND because I saw you were a fast-growing company, so I wrote the letter. I wanted you to go public because you can make more money and spend it on expanding and make more commercials and more bars.”

Daniel left Alex with this advice: “Along the journey, I made so many mistakes. And I learned and got better. I hope you always have the courage to take risks.”

Alex was beaming throughout the meeting. After all, he had just become the world's youngest CFO.

Read more: Cool to be KIND