Sleep-away camps for adults provide the opportunity to leave civilization and return to the games, rituals and intense bonding of childhood summer camp. Grab your sleeping bag and find your tribe! 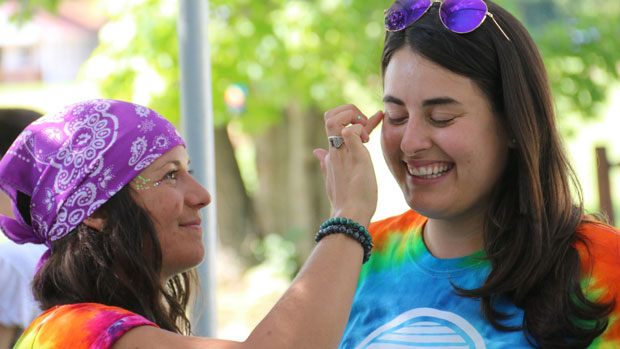 Woman having her face painted at Soul Camp.

The ultimate list of adult camps in the United States.

First it seemed like a fad; now it’s a full-fledged phenomenon. Grown-ups are heading back to camp in droves. Perhaps we miss the camaraderie and fun we found there as kids—or maybe we want to experience that peaceful sense of singing by the fireside and canoeing in a mountain lake for the first time.

Many of these adult sleep-away camps evoke traditional summer camp themes: You sleep in a cabin, have campfires and s’mores, eat in a mess hall, do classic camp activities such as tie-dye and arts-and-crafts. Some are like wellness retreats in the wilderness, with a full range of offerings such as power yoga and psychic readings. Other camps cater to more specific themes and hobbies, from wine harvest camp to zombie survival camp. Simply follow your bliss. Don’t see your favorite on this list? Let us know in the “Comments” section, below. 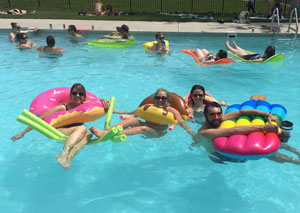 One of the original sleep-away camps for adults, Camp Throwback was founded in 2013 by blogger, author and body acceptance guru Brittany Gibbons and her husband, Andy. Look for old-school games and activities, plenty of booze and an accepting community of all ages. The camp runs two four-day sessions each summer in rural Ohio; places sell out quickly.
campthrowback.com/

Former camp counselor Adam Tichauer left his corporate job in 2014 to found Camp No Counselors, a concept which he took on Shark Tank and has made into a successful business. Camp No Counselors now operates its weekend camps almost year-round in 16 cities in the U.S. and Canada. The emphasis is on fun, games and freeing your inner child.

Read more: 8 Ways to Find Your Own Tribe 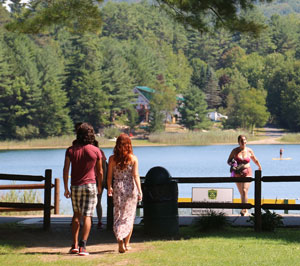 No drugs, no alcohol—just lots of great activities, friendly people and fantastic vibes. Soul Camp combines the fun and community of summer camp with the transformative power of a wellness retreat, including all the workshops and amenities you could want. Four-night sessions take place several times a year in New York and California. They also offer special one-day retreats in Chicago and New Jersey.
https://soul.camp/
4. Campowerment
Campowerment is more than a camp—it’s an all-women’s empowerment retreat, offering personal development, wellness and mindfulness workshops and activities from dusk till dawn. Camp founder Tammi Leader Fuller has created an environment where every woman can open up, be real and reimagine herself while finding a new community of friends. Camps run in the Pocono Mountains in Pennsylvania and Malibu, California.
campowerment.com/
5. Club Getaway

Club Getaway has its own beautiful fixed location in Kent, Connecticut. Choose a weekend in summer for a bit of sunshine, greenery, good food and water sports. Some camps have themes, including Generation X, Camp John Waters, Jewish Professionals and many more.
clubgetaway.com/

A straightforward camp for grown-ups, Camp Bonfire has great amenities plus the benefit of a prime location on Lake Owego in the Pocono Mountains in Pennsylvania. Spend your days taking nature hikes, kayaking or writing poetry. The founders’ philosophy is, “We believe that great joy can be found in nature and each other.”
campbonfire.com/

Camp Kid Again is keeping things simple and nostalgic. This South Carolina-based camp may be for adults and offer an open bar, but the packing list reads like a kids’ camp. And the activities could be straight out of a summer camp brochure (relay race, archery, tie-dye) with the exception of more grown-up fun, including human foosball and drinking games.
campkidagain.com/

Serving the LGBT community since 1997, ‘Camp’ Camp, outside Portland, Maine, may be the first sleep-away camp for grown-ups—a going concern long before the trend caught on. Each year 200 men and women gather from across the country for a week of arts and outdoor activities, camp games, rambles and good times.
campcamp.com/

Way up north in Wautoma, Wisconsin, Camp Halcyon is splitting the difference between nostalgia and, well, hedonism. Three times a year, in July, August and October, Halcyon offers a hybrid of old-school camp cabins and canoes and grown-up concepts like yoga on the beach (lakefront), three chef-prepared meals a day and a cocktail hour sponsored by local whiskey and beer companies.
camphalcyon.com/ 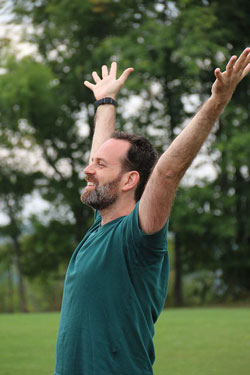 Camp Rahh near Seattle offers an all-inclusive four-day weekend of outdoor fun—four-course meals and bus transportation included. Sleep in traditional log cabins, enjoy live musical performances, meditation, horseback riding and, as they say, “make new best friends.” What could be better than that? Camp Rahh operates once a year; from August 24 to 27 in 2017.
camprahh.com/#seattle-adult-summer-camp

Summer camp forms such an integral part of the Jewish-American experience; it’s not surprising to find a camp designed especially for Jewish adults. Camp Nai Nai Nai opens its cabin doors once a year on Memorial Day weekend (May 26 to 29 in 2017) in Waynesboro, Pennsylvania, among the lakes and trees of the Catoctin Mountains. Engage in the typical camp games and activities, meet new friends and enjoy Shabbat under the stars.
campnainainai.org/

Trybal Gatherings is a collection of several adult camp experiences across the country, all geared toward Jewish young adults. In addition to Camp Nai Nai Nai (see above), TG operates three-day camps with all the fun fixings in August, September and October in the Berkshires in New England, Lake Beulah in Wisconsin and Simi Valley in Southern California. See the website for dates and rates.
trybalgatherings.com

Perhaps best known as a Ben & Jerry’s ice cream flavor, Wavy Gravy is in fact a real person: Formerly a stalwart hippie, he now runs a popular camp for circus arts in Northern California. For one week each summer, grown-ups can try their hand at trapeze, clowning, juggling, magic and more. As Wavy says, “It’s never too late to have a happy childhood.”
campwinnarainbow.org/california/kid/camps/summercamps/adult-camp

For 10 years, Youth Empowered Action (YEA) Camp has been running leadership camps to train teens to get active on social justice issues. Now it’s offering a special session to help progressive-minded adults make a bigger difference in the world. Learn how you can get more active on a cause you care about, while enjoying the silliness, fun, and community that’s unique to going to camp. Held at an animal sanctuary in High Falls, New York.
yeacamp.org/adults

You’ve watched every season of The Walking Dead and you’re feeling a little wary. You know what might help? A weekend packed with hands-on classes in crossbow, knife throwing, Zombitsu (a specialized form of hand-to-hand combat) and advanced first aid (sounds like you’re going to need it). All classes are led by certified instructors dressed like regular people. Camp takes place in Central New Jersey, not far from Atlantic City and Philadelphia.
zombiesurvivalcamp.com/

Epic Nerd Camp (ENC), in Eastern Pennsylvania, not far from Scranton, wins the prize for best name. If you love to dress up in medieval costume and know what LARP is (Live Action Role Playing), you’ve found your tribe! Activities include circus games, non-fatal jousting and every board game imaginable. ENC offers two sessions this August. Bring your cape.
epicnerdcamp.com/ 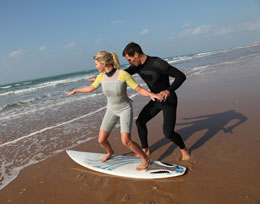 Endless Summer Surf Camp enjoys a prime location on San Onofre State Beach, in between Los Angeles and San Diego. A five-day session runs from Monday through Friday during beach season, which is May through September. Learn to ride the waves by day and delight in camping on the beautiful beach by night. (Caveat: San Onofre beach did close once in 2017 due to a shark attack. Bring your spear.)
endlesssummersurfcamp.com/adult-surf-camps/
Read more: Mud Runs and 6 Other Ways to Conquer Your Fears

Held during the grape harvest in September in Sonoma County, California, this three-day camp offers the chance to pick grapes in the vineyard and tour several Sonoma wineries. Campers also learn the history of winemaking in the area and, of course, enjoy extensive meals served with local Sonoma wines.

Thought you were too old to make like Buzz Lightyear? The Space Camp facility in Huntsville, Alabama, made famous in movies for kids, also has a camp for adults. This three-day program is a little less campy than some in that you can sleep in a dorm bunk bed at the facility or at a local Marriott. You do, however, get to train on the multi-axis trainer, and perform an extended-duration simulated mission. Check website for dates and rates.
spacecamp.com/space/adult 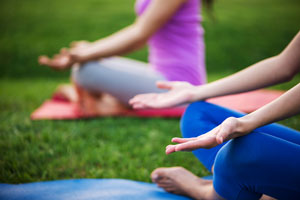 Kripalu is a school and retreat set among the bucolic hills and valleys of the Berkshires in Western Massachusetts, overlooking Lake Mahkeenac. In June, July and August Kripalu offers five-day sessions that include outdoor yoga, forest bathing sessions, kayaking and arts and creative expression. Not exactly roughing it, accommodations consist of dormitory rooms with bunk beds or single beds—or you can request a private room.
kripalu.org/presenters-programs/yoga-summer-camp-outdoor-adventure-adults
Read more: Sleep-Away Camps for Grown-Ups Offer Play, Transformation

Emily Wise Miller is the web editor at Live Happy. Her last article for livehappy.com was: On Edge Takes a Personal Look at Living With Anxiety.