Singer-songwriter, mother and mindfulness maven Alanis Morissette discusses her rise to fame, how she managed to ground herself after the release of her hit album “Jagged Little Pill,” and the ways in which motherhood has changed her life. 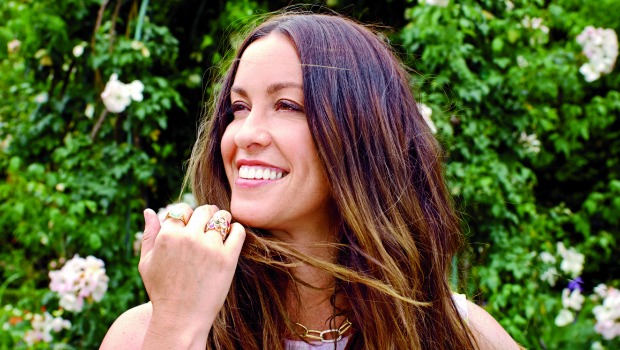 The singer, songwriter and mother has learned to live in the present.

Alanis Morissette has had several “phoenix rising from the ashes” moments in her life.
Perhaps the most significant was right after giving birth, when she suffered from postpartum depression. “I think postpartum depression often affects—not always obviously—but often affects women who were in one mode of operation. In my case, [I was] very career-orientated, very work-addicted. And so when I gave birth to my son, and frankly when I got married, it was a huge sea change.”
She continues, “I was attempting to live the equivalent of 14 people’s lives all in one human body, combined with the hormonal underpinnings. My temperament is highly sensitive, combined with this high novelty or high sensation-seeking element to it. So often I would feel like I had my foot on the brake and the gas pedal at the same time,” Alanis says. 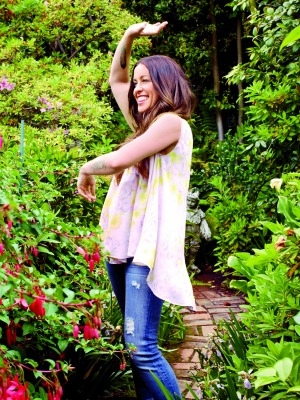 She credits the happiest moment of her life to giving birth to her son, Ever Imre, in 2010. She describes it as a “pretty blissed out, oxytocin-riddled moment.” To her, raising a child is about being as attentive as possible: “I just think mindfulness and parenting are the same thing. If we’re distracted or we’re barely there, we’re technically not parenting.”
Alanis built a studio in her Los Angeles home so she could raise her child mindfully while also working on her passion and career. “For me, offering presence is commensurate to offering love,” she says. “Offering that to a child is the greatest gift of all.”
Read a behind-the-scenes look at our photo shoot with Alanis here.
For her, being a parent is akin to activism, in the sense that you’re making the world a better place by bringing new life into it. “It creates the foundation of what this planet will evolve into,” she says.
Her husband, Mario “Souleye” Treadway, fellow musician and father of her child, joins her in choosing a mindful path—for parenting and all aspects of life. They met at a meditation gathering. “He came with a mutual friend of ours, and when he walked in I just thought ‘Wow!’” Alanis says. It stood out to her that “he was oriented toward really doing the brave inner work, the kind of inner work that isn’t always comfortable.”

Alanis started playing the piano at the age of 6, and, a few years later, her talent for music began to shine through. She wrote her first song at the age of 9, and, by age 10 she started acting on the Nickelodeon show You Can’t Do That On Television. By 14, she had signed her first major record deal, spending her early teenage years as a pop singer in Canada.

Even with early accomplishments, Alanis remained a go-getter; she packed her things and moved to Los Angeles to pursue her music career. That’s when her massive success came at the age of 19—Jagged Little Pill was introduced to the world. Alanis was almost immediately catapulted into fame: millions of passionate, loyal fans; sold-out concerts; traveling and performing week after week. People would come at her with multiple opinions about the direction of her music, fans were breaking into her hotel room, and she was recognized everywhere she went.
“After the tour for Jagged Little Pill and that whole experience, I just felt like I grabbed the brass ring that I’ve been encouraged to chase my whole life, through culture and otherwise. And so there I was, everything was amplified, so if there was any underlying loneliness or unresolved wounds or traumas, from childhood, etc., they were all exacerbated."

To read more of the feature about Alanis Morissette, including amazing insights and original photos, pick up the August 2015 issue of Live Happy magazine.