Are You a Phone Snubber?

Get familiar with the concept of phubbing, or phone snubbing. It could be hurting your closest relationships. 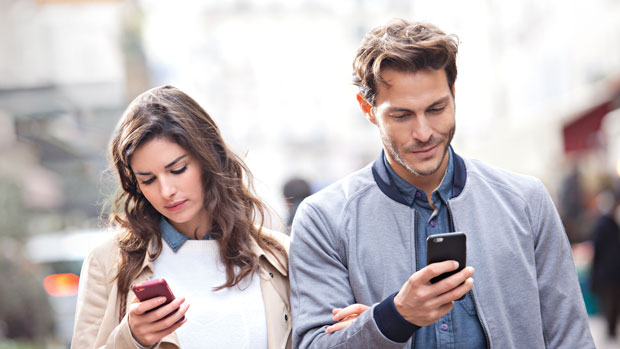 Handle tech distractions so they don't harm your relationships.

It’s annoying, and we’re both guilty of it. It’s one of the prime ways we—as married happiness researchers—make each other supremely unhappy. See if you can guess what’s going on here:

One of us: “Honey, I was thinking tonight maybe we take Leo to dinner at that sushi restaurant. What do you think?”

The other: “Huh?” (Silence). (More silence).
“You done?”
“Yes.”
“Honey, I was thinking tonight maybe we take Leo to dinner at that sushi restaurant. What do you think?”
“Sounds great.”

If you haven’t already guessed, the conversation stopper was a smartphone. While it makes coordinating child care and running our research projects together easier, at times it has also made us feel incredibly disconnected from one another. Checking it when we should be checking in with each other can send signals to our partner whom we love dearly that they are not a priority.

Whether it’s looking at the latest scores for fantasy football (Shawn) or lurking the halls of Facebook to get glimpses of friends’ baby pics (Michelle)—those moments when our partner feels we’ve chosen our smartphone over them can damage our relationship. 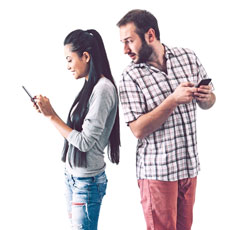 Researchers have recently given this bad behavior a name: Phubbing (phone + snubbing). Phubbing happens when one person checks a phone, in essence snubbing their partner, when they are supposed to be hanging out together. A study by Brandon McDaniel and Sarah Coyne published in the Psychology of Popular Media Culture found that of the women surveyed who were in a romantic relationship, 62 percent of them said phubbing happened to them daily. As many as 1 in 3 said their partner pulled out the phone during meals together, and 25 percent said their loved one sent text messages or emails to other people while they were having a face-to-face conversation.

Phubbing is a natural consequence of an addictive national pastime that has only become more prevalent. The Mobile Mindset Study conducted by mobile security company Lookout found that three out of five smartphone users in the U.S. don’t go more than an hour without checking their phones. Another study found that the average American checks his or her phone every six to seven minutes. I guess we’ve just replaced the famous seven-minute conversation lull with a quick scan of social media to fill the void.

The fallout of these tiny choices in our relationships is real—often leaving the other person feeling insecure that they are boring or frustrated that they are not getting the attention they want. In the study published in the Psychology of Popular Media Culture, 70 percent of participants said that phubbing harmed their ability to interact with their romantic partners.

Marriage and relationship researcher John Gottman, Ph.D., has found that couples with flourishing relationships have a positivity ratio of 5:1, and that a negative event (like being phubbed by your partner, for instance) necessitates five positive interactions to balance it out. Better not to phub in the first place!

We decided to turn to our resident expert on technology and happiness, our colleague and Shawn’s sister Amy Blankson, author of the brilliant new book The Future of Happiness, in which she looks at how to leverage technology to be happier in life. She put away her phone, looked us in the eyes, and gave us her advice on concrete action steps to have a positive relationship with our phones and each other.

Here is what we learned:

Pick the times of day when everyone has the highest chances of connecting in person, like car rides or dinner times, and make sure the phones are stashed. For us, the most fun time of the day with our 3-year-old son, Leo, is the morning. Therefore, we’ve made it a rule that he can’t watch any videos before naptime, and we put our phones away, too. This simple shift has significantly increased the number of meaningful moments between the three of us.

2. Ring in the good times

Give the babysitter a special ringtone so you don’t have to check every call. Create a sacred space for date nights by getting the phones off the table. A study from the University of Essex found that having a smartphone on the table during a face-to-face conversation reduces feelings of closeness, trust and relationship quality. Use your phone’s ringtones and notifications to your advantage.

Don’t bring your phone to bed with you. Tuck it into its own recharging station away from the bedroom. At the launch of our partner Arianna Huffington’s new well-being company Thrive Global, she unveiled the Phone Bed Charging Station, which is a mini bed, complete with satin sheets and a built-in charger. It’s the perfect size for your smartphone. Arianna suggests putting it in the kitchen or living room and buying an old-fashioned alarm clock for the bedroom.

For us, being more conscious of our often unconscious behavior of checking our phones is still a work in progress—but paying attention to it has made all the difference. That and the fact that football is not in full swing this time of year!

For more on Amy’s new book, see her interview on page 94 in Live Happy magazine. And, for a great way to use technology to start your day right, join us for our (free) Wake Up & Inspire Happiness Video Workshop at broadcastinghappiness.com/happiness.

Listen to our podcast on tech and well-being: The Future of Happiness With Amy Blankson

SHAWN ACHOR is best-selling author of the The Happiness Advantage and Before Happiness. Shawn’s TED Talk is one of the most popular ever, with more than 5 million views, and his PBS program has been seen by millions. Learn more about Shawn at Goodthinkinc.com.

MICHELLE GIELAN is an expert on the science of positive communication and the author of the book Broadcasting Happiness. Formerly a national anchor for CBS News, Michelle holds a masters of applied positive psychology from the University of Pennsylvania. Learn more at Goodthinkinc.com.