Arianna Huffington is passionate about success. And while success has been a focal point in her life, today, her view of success is tied closely to well-being and happy living. 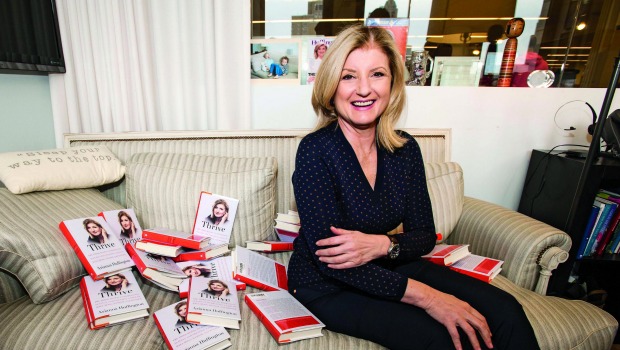 For this recovering workaholic, well-being is a crucial part of success.

Arianna Huffington is passionate about success. And while success has been a focal point throughout her life, she sees it much differently now than she did even a few years ago. Today, her view of success is tied closely to happy living: “Well-being is now going to be in the center of my life, not on the edges.”
Speaking at the International Symposium of Contemplative Studies in Boston in November, Arianna shares how she has accomplished the far-reaching goals she set for herself and did it in a way that helped define many of the major topics of our lifetime: women’s roles in the workplace and the world, the changing nature of political leadership and 21st-century innovations in media. Now, she has turned her attention to living a good and happy life.

Playing the game of life

“We have, if we’re lucky, about 30,000 days to play the game of life,” Arianna says in a recent interview. “How we play it will be determined by what we value. A huge part of that is our relationship with time. So for me, a well-lived life is one where there is ample time for the people in my life who truly matter, time to pause and wonder at the world, and time to delight in the mysteries of the universe, as well as the everyday occurrences and small miracles that fill our lives.”
In her 2014 best-selling book, Thrive: The Third Metric to Redefining Success and Creating a Life of Well-Being, Wisdom, and Wonder, she asks us to consider redefining success beyond the timeworn standards of money and power: “To live the lives we truly want and deserve, and not just the lives we settle for, we need a third metric, a third measure of success that goes beyond the two metrics of money and power, and consists of four pillars: well-being, wisdom, wonder and giving.”

The value of failing

Arianna credits her mother with instilling optimism and resilience. “My mother taught us that failure is not the opposite of success, it is the stepping stone to success.”
She lives that life philosophy firsthand. After graduating from Cambridge, she wrote a successful book, The Female Woman. But 36 publishers rejected her second book, and a seven-year relationship ended shortly after that.
“By about rejection 25, you would have thought I might have said, ‘Hey, you know, there’s something wrong here. Maybe I should be looking at a different career.’ ” Instead she walked into a bank in London where she was living at the time and asked for a loan. “Even though I didn’t have any assets, the banker—whose name was Ian Bell—gave me a loan. It changed my life, because it meant I could keep things together for another 13 rejections and finally, an acceptance.

Getting up one more time

“In fairy tales there are helpful animals that come out of nowhere to help the hero or heroine through a dark and difficult time, often helping them find a way out of the forest. Well, in life, too, there are helpful animals disguised as human beings, as bank managers like Ian Bell, to whom I still send a Christmas card every year. So, very often, the difference between success and failure is perseverance. It’s how long we can keep going until success happens. It’s getting up one more time than we fall down.”
Arianna moved to New York, where she continued writing books and magazine articles. After weathering ups and downs in love, career and even politics, Arianna co-founded The Huffington Post in 2005.
The site was not an immediate success; it faced a storm of negative reviews, including one particularly harsh but memorable criticism from LA Weekly’s Nikki Finke, who called it “the movie equivalent of Gigli, Ishtar and Heaven’s Gate rolled into one.”
Yet Arianna refused to be diverted by the criticism. Today, she says that backlash gave her the incentive to persevere. The truth is, we are always going to
get bad reviews, she says. The answer is to rely on our personal resilience and continue our journey. In her case, the critics may remain, but the site has gained respect, credibility and worldwide recognition.

The most powerful blog in the world 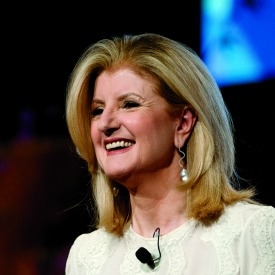 In 2012, The Huffington Post won the Pulitzer Prize for a 10-part series on wounded veterans, becoming the first commercially run digital site in the United States to win the prize. It also has been ranked No. 1 on the Most Popular Political Sites by eBizMBA Rank, and The Observer, a British newspaper, named it the most powerful blog in the world.
“At some point, I learned not to dread failure,” she says. “I strongly believe that we are not put on this earth just to accumulate victories and trophies and avoid failures but rather to be whittled and sand-papered down until what’s left is who we truly are.
“My advice to those facing critics or challenging times is to refrain from adding our own self-criticism into the mix. This means dealing with the voice I call the obnoxious roommate living in our head, the voice that feeds on putting us down and strengthening our insecurities and doubts.”

Arianna now uses her media platform to showcase her happiness discoveries. The Huffington Post regularly includes news on happiness and how to achieve it. It’s a journey she embarked on after receiving a serious wake-up call in 2007.
Exhausted from the relentless hustle of running a booming media enterprise, Arianna collapsed while at her computer in her home office. As her head hit the desk, she injured her eye, broke her cheekbone and ultimately realized she needed to find a new approach to her hectic life. She returned to the meditation and yoga exercises her mother had shown her as a child. She says now, “I wish they had just told me, ‘You have civilization disease.’ ”
That’s how she sees it today, she explained at the Boston symposium: If you are driven to focus only on wealth and power, you, too, might have civilization disease. “Our society is made of highly educated good people making bad decisions. It’s not that they’re not smart, it’s that they’re not wise. We all have that wisdom in us,” she says. “I would never again congratulate someone for working 24/7. It’s like coming to work drunk.”
Arianna is using her resources—such as books, speaking engagements and her media company—to help others learn how to adopt a lifestyle that encompasses well-being and wonder, wisdom and giving. She sees mindfulness as an important element in redefining success, in slowing down or even stopping the busyness of our lives, if only for a few important moments to begin each day.
“The fact that there is now so much scientific exploration that builds on ancient wisdom is cause for great optimism,” she says. “It doesn’t matter why we start on this journey…at some point we’ll all realize that we’re bigger than our jobs.
“However great your job is, you are more marvelous! Getting in touch with that magnificence is part of your journey.”

Jan Stanley is a writer, coach and speaker who has worked with Fortune 500 companies to develop leaders and with many people to help them find meaning and joy in work and life.