Be Happy in this Short Life

What secret to happiness is held by residents of the mountainous kingdom of Bhutan? Find out here. 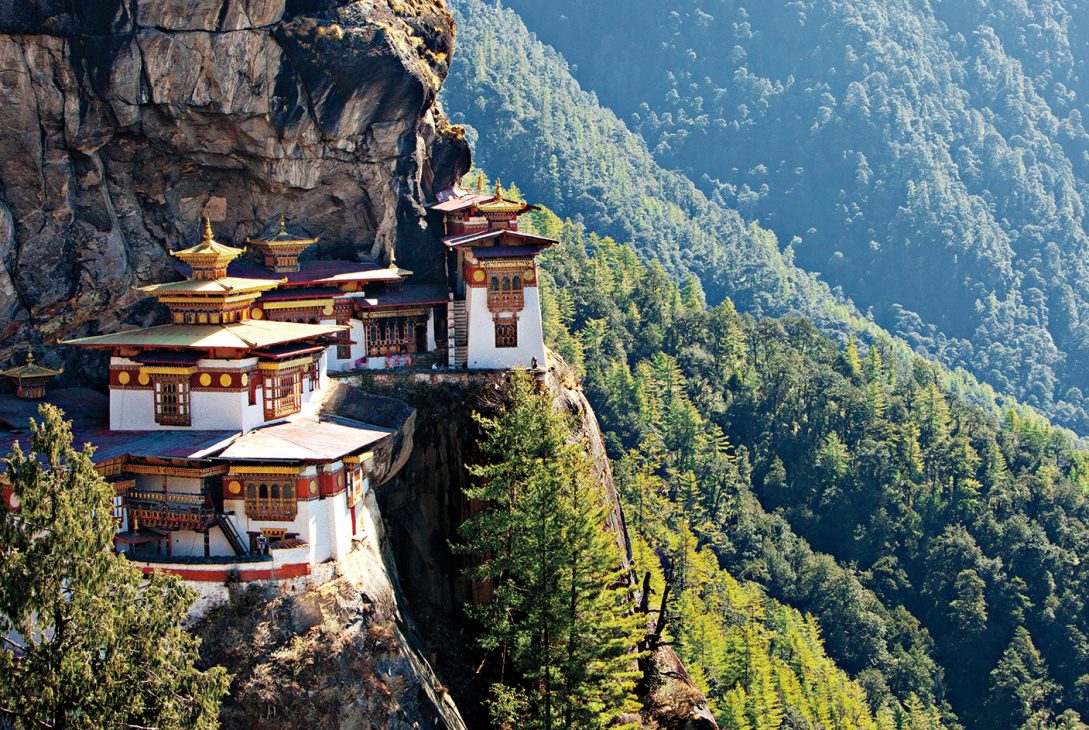 Well-being is an integral part of life in the mountain kingdom of Bhutan.

Bhutan, a tiny Buddhist kingdom in the eastern Himalayas, has gained international recognition for its concept of “Gross National Happiness,” an alternative to the gross domestic product as a measurement of a country’s standing. Created in the 1970s by the fourth king of Bhutan, who said he was more concerned with the well-being of Bhutan citizens than the country’s economy, the concept has been studied and adopted by other countries.

Happiness claim to fame: Developed the Gross National Happiness Index, which uses several indicators, including socio-economic development, environmental conservation, preservation and promotion of culture, and governance to measure the overall happiness of its residents.

The concept of time is suspended as you enter the circumambulatory pilgrim stream at the National Memorial Chorten in Thimphu, Bhutan. The monument is a daily touchstone for worshippers in the capital city; Mahayana Buddhism is the state religion here. The clang of a giant, wobbly prayer wheel bell rhythmically punctuates an explosive clap of pigeon wings. Pilgrims shuffle over cobblestone, whispering mantras while handling long strands of mala beads.

Practice of the Mind

Inside the chorten’s Tshokhang, or ritual hall, Lama Namgay, a senior monk, sits cross-legged in a darkened corner, his broad shoulders draped in the folds of his maroon and saffron robe.
“To realize happiness, I had to meditate,” he says in his native Dzongkha through an interpreter. “That is when I found the nature of true contentment. “For me, happiness is achieved by calming the mind and freeing oneself of desires.”
He was 7 years old when he joined the monastery body and continued with a decade of study and meditation training at Tango Buddhist College. He refers to a stint where he spent three years, three months, three weeks, and three days in complete meditative seclusion as the most satisfying and content period of his life.
Click here to read more about the culture of Bhutan.
Now, as a learned monk, he teaches novice monks, performs rituals for Bhutanese pilgrims and oversees daily operations at the National Memorial Chorten, a monument dedicated to the memory of Jigme Dorji Wangchuck, the third king of Bhutan.
“To live this life, you often want more,” he says. “You want more cars, more houses. There is the feeling that the more materials you possess will lead you to happiness. Everything is impermanent. Once born, we have to die. It is a short duration. So, to dissolve your desires is very important. Train your mind and it will change your life.”
To achieve more peace and well-being, Lama Namgay plans to retire from serving the monastery body and relocate to a remote place in the mountains to further immerse himself in meditation.

Practice of the Body

In the Paro Valley, an alloy-steel arrow whizzes 450 feet through the air. It just misses the target and punctures a haystack wall in a puff of dust. Seconds later, another arrow pierces a white wooden plank, inches shy of the bull’s-eye. A handful of men in knee-high socks erupt into cheers and begin to dance in slow circles, their bows lifted high in the air.
Dorji is a native of Wangdi, in central Bhutan, and works as a tourist guide. As a boy collecting firewood in the forest, Dorji would take along his traditional bamboo bow and arrows. He has now graduated to an alloy-steel bow and takes great pride in the national sport of the Kingdom.
“There is a feeling shared among all of us who compete that we are preserving our traditional culture. That brings me great happiness, as it keeps me connected to something that goes deeper than the sport itself,” Dorji says. “And to win the match is seen as an auspicious sign for the year to come!”
Click here to read more about the archery of of Bhutan.
Dorji explains that archery offers fierce competition, but it is also just good, clean fun. Tournaments require sustained physical strength and can often last eight hours. Dorji often practices at Changlimethang, the National Archery Stadium in Thimphu.
“There is a focus that we must bring to these matches, but at the same time it is a form of tension relief,” he says. “It is a means of driving away the emotional stress that comes with our daily lives.”
For Dorji, the sport seems to be the remedy. “From my perception, there is no real choice but to be happy in this short life. To be born into this human life, we have time to practice, to enjoy. The choice is in our hands.”
Click here to read more about happiness around the world.
(Visited 147 times, 1 visits today)
Popular Articles