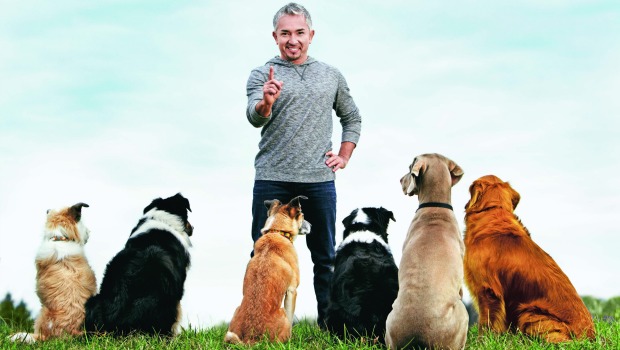 The famed animal advocate's work originates from a great sense of compassion.

As Cesar Millan begins to talk about dogs, it hits you. The man isn’t really just talking about dogs at all. Ask him one question—any question—and the world-renowned animal behaviorist runs with it. By the end of the conversation, you realize your time with him has been a frolic through colorful psychological playgrounds, where Cesar loves to venture completely off-leash.

“You want to know how dogs fit into a family dynamic? Through adaptability— adapting into an environment,” says Cesar, whose show Cesar 911 has fetched millions of viewers on Nat Geo Wild. “Because two different species—humans and canines—come together with the same goal, which is to have social interaction.

“That is something that is so mechanically engineered inside of both species and that’s why we get along so well. Because we both have the ability to adapt. So, for me, adaptability is key. The other is the necessity of being part of a group. It doesn’t have to be the same group. It just has to be a group. We both need to belong to something.”

Cesar’s current television incarnation evolved after his immensely successful run on The Dog Whisperer with Cesar Millan, which debuted in 2004 on the National Geographic Channel. By the time the series ended in 2012, it aired in more than 80 countries and had transformed Cesar into a modern-day sage for dog owners—or really anyone with a penchant for personal growth. The goal of his current show follows similar suit, but Cesar wanted to take it to another level.

It’s a fabulous distinction to make and puts the focus on educating the dog owner about canine and human psychology. “Sometimes, humans take very drastic measures [with dogs],” he says. “My point of view is: Let’s show people how we can change a chaotic situation into a harmonious lifestyle. It doesn’t matter how bad you think things are. If you are willing to do what it takes, we can change the lifestyle of the dog.”

Power of the pack

Cesar often reveals that the power of the pack is a key component to rehabilitate a troubled dog. But in recent years, especially with his “Cesar Millan LIVE” seminars and on various episodes of Cesar 911, he educates audiences how that concept also works with humans. 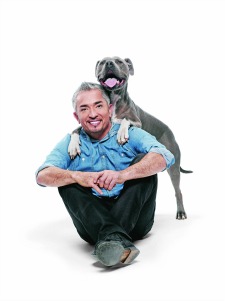 “They always say it takes a village to raise a child. Well, it takes a group of humans to really help one or two humans do the right thing. [In some episodes] I am saying, ‘Listen, I already showed you how to rehabilitate dogs. Now, I am going to show you how to go after humans and rehabilitate them.’ ” All of this filters into Cesar’s signature purpose to illuminate what both species really need in order to live more enriching lives—“trust, respect and love,” he says.

“The genuine side of love from a dog is important. They love who you are, as you are, not what you have. It really heals a lot of people, and motivates them to be inspired. It’s also very healing to the heart. I don’t think you can survive without loving somebody.”

The road to happy

Cesar’s love and commitment to canines soared when he was 13 years old. He was living in Mexico with his family, and he remembers wanting to be the best dog trainer in the world. Fate fueled that inner calling but it also offered him difficult challenges after he crossed the Mexican border into California at the age of 21. He found himself living on the streets of San Diego, nabbing as many jobs grooming dogs as he could.

Eventually, he relocated to Los Angeles, where he launched a freelance dog rehabilitation service. People noticed something: Cesar’s calming effect on even the most challenging canines. “I don’t think it’s only with dogs,” he admits, charmingly. “It’s with any animal because I am just as respectful to a dog as I am to a horse, as I am to an elephant, as I am to a chicken. I think all animals know how to read ‘energy.’ ”

As Cesar’s rehabilitation practice grew, it led to the opening of his first Dog Psychology Center, which eventually became the 43-acre Santa Clarita Valley ranch featured on both Dog Whisperer and Cesar 911. The haven now includes an area for sheep herding, air-conditioned kennels, a swimming pool, obstacle course and hiking trails.

He says he is happiest at the ranch. “It was a dream of mine for some time,” he says, beaming. “It became the place where I can be me, where Mother Nature rules. A horse can run around with a dog, a chicken can run with a dog or a llama. It’s so genuine. The horse never cares if I bring pit bulls or Rottweilers or German shepherds. What he cares about is: Can that dog be respectful? “It always reminds me: ‘Let’s just keep everything harmonious and we can all get along.’”

It’s all about energy

The concept of energy—a vibe, for instance—is beguiling to explore with Cesar and it helps address the question of happiness.

“Whatever energy you are emoting, dogs can feel it,” he says. “If you are fearful, you don’t have a billboard that says ‘I am afraid of dogs.’ You are just projecting fear. So if you are happy, then a dog will feel that happiness.”

But can dogs actually feel happy on their own? Definitely. Cesar often expounds on this on his website, cesarsway.com. If a dog, with tail wagging, approaches its owner upon her return home, that’s happiness. After a meal, if a dog cuddles with its owner, that’s all about being content.

Research backs the idea, too. In a brain-imaging study, scientists at Atlanta’s Emory University identified the part in a canine’s brain associated with positive emotions. Like humans, dogs have tremendous interspecies social intelligence and empathy. Happiness, it seems, is an equal-opportunity provider for both species.

Cesar has created more than a dozen best-selling books, CDs and DVDs in addition to the television shows and website. The Cesar Millan PACK Project works to prevent euthanasia of shelter animals. It is designed to improve the health, happiness and harmony of dogs and people by allowing both species to learn from and support each other.

He finds a tremendous sense of purpose helping people connect to animals and themselves. “It makes me feel more human,” he admits. “I always say, ‘The pack leader cannot do anything without the pack and the pack cannot do anything without the pack leader. Can we all be one, or one world? Every time you are sad or over-consume [on social media or material things], just go help somebody else and that sadness goes away. Everything that you want to do begins with you. It’s not a metaphor. It’s a reality.”

Cesar credits his relationships with people—including his two sons (André, age 21, and Calvin, 17), and fiancée, Jahira Dar—and with canines (including his beloved pit bull Junior), with fueling his deeper personal growth.

“I always tell my kids there are two lines—the right line and the wrong line,” Cesar says. “If you are in the middle…that means you are confused. My point is to guide them to make their own decisions and help them move through uncertainty more than anything. So I find inspiration in that.

“That’s happiness to me. Can I be happy in that moment? Can I be love?”

Greg Archer is a freelance journalist and author. His profiles have been featured in The Huffington Post and O, the Oprah Winfrey Magazine.