For Niecy Nash, Happiness Is Always in Style

Actress Niecy Nash uses the power of positivity to improve every aspect of her life—from work to love to parenting. 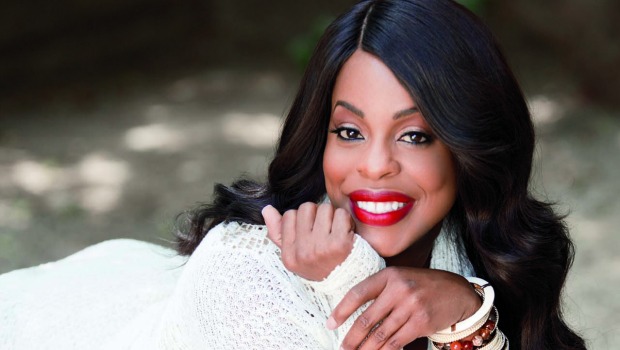 All photographs by ©Soul Man except top inline photograph below (Niecy in uniform) ©Scream Queens FOX.

The actress and comedian uses positivity to help her power through life.

At just 5 years old, Niecy Nash discovered her life’s passion: to make people laugh. Living in St. Louis, Missouri, at the time, she was watching television with her grandmother when she caught a glimpse of Lola Falana on the screen. “Here was this beautiful black woman, and I knew right then that I wanted to be just like her. I wanted to be black, fabulous and on TV. And I wanted to put a smile on people’s faces.” 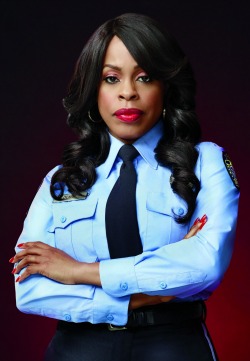 Her family’s move to Los Angeles when Niecy was 8 years old brought her one step closer to that dream. And after guest-starring on various TV shows after college, she eventually rose to fame on the comedy Reno 911! in 2003. And she hasn’t stopped working since.

A life of comedy and tragedy

But despite her professional success and the indomitable drive that continues to fuel it, Niecy hasn’t led a charmed life. At age 15, Niecy saw her mother critically injured in a shooting. “My mother was just a few feet from me when her boyfriend shot her in the middle of our street. She survived, but that incident resulted in so much heartache.”

In 1993, more tragedy touched her family. Niecy’s younger brother, Michael, was shot to death by a classmate at his Reseda, California, high school. He was 17. “That was the day before my 23rd birthday,” she says. Niecy says her mother sank into a deep depression after the death of her son. To pull her mother from that darkness, Niecy turned to humor. “I realized what a gift comedy can be when I started to see her spirits rise, even slightly, when I’d tell her jokes.”

Niecy’s heart broke once again when her marriage to Don Nash (the father of her three children) ended in divorce in 2007. “That could have been the straw that broke the camel’s back,” she says. But instead, she relied on a unique perspective. “I can see how someone might say ‘this woman has a right to be crazy, bitter or angry.’ But I choose to be grateful, positive and hopeful,” Niecy says. “I don’t believe those horrible things that happened are the total sum of me. And instead of being angry about them I have a desire to try to live my best life in spite of them.”

Niecy has a specific picture of what her best life looks like. “It’s a state of mind,” she says. “It’s enjoying love in so many different forms and unexpected places.” So to fill her life with happiness, she fills her head with peace.

“I’ve learned the importance and beauty of peace of mind. There are so many things that happen in life that could be sources of anxiety or make you unsettled. And yes, some of those things are major life events or tragedies, but others could be as simple as a cranky co-worker who snaps at you. In the face of any of those things, I choose to steady myself and replace the negative thoughts it’s so easy to have with positive ones that feel a lot better in the long run,” she says.

Niecy looks at the painful aspects of her life as proof of her mental and emotional mettle. “Once you realize you can survive a thing and that the last time you laughed or smiled wasn’t the last time you were going to laugh or smile, you discover a strength in you. You find the ability to say to yourself, ‘If I can do this, I can do anything.’ You start to ask yourself ‘why not me…I’m tough enough to get through this.’”

When she speaks of her brother, it’s clear Niecy’s heart will forever carry the pain of his loss. But she won’t allow grief to swallow her happy memories or anger to consume her life. Choosing to persevere with positivity can prevent pain and loss from stealing the future.

“I’m not talking about being Miss Rosy Sunshine or pretending bad things don’t happen, because I know they do,” she explains. “I just approach my attitude like a wardrobe. We all get up every day and decide what jeans or shirt to put on and for me, my attitude is the same thing. I choose to put on and wear a positive outlook and attitude and to try and see the good, even if it’s buried in there a bit and I have to go looking for it.”

Part of that decision includes living in the moment. Her happiness doesn’t hinge on problems, money or fame. Niecy says she doesn’t live her life to only dread, amass or cherish those things. “I think that if you live your life only based on what you have, it becomes challenging to still be happy” if your situation changes.

“I like to look beyond happiness,” she says. “I aim to have and give joy because I think that’s the thing that keeps you going even if everything in your life is not going right.” And to stay connected to joy, she keeps herself in a place of gratitude.

“It’s hard to have a sad face or a weary spirit when you’re living in gratitude,” Niecy says. “Every day you wake up and your feet hit the floor, there’s something to be grateful for. Your kids, your dog, a meal, whatever. When you remind yourself of all you have, the pain of what you’ve lost, or haven’t yet found, starts to ease.”

To further maintain that joyful focus, Niecy says she looks for positive energy around every corner. And that perspective is fueled by the laws of attraction. “I believe that at any given moment in life, you can attract a version of what you are. So I don’t entertain conversations, people or settings that drain me or make me feel bad.”

Even her cellphone message conveys Niecy’s outlook. She asks that callers not leave a message if it’s not about love or conveyed with a positive spirit. “Don’t leave any of that mess on my voicemail to clean up,” she says. She consciously seeks to surround herself—not just her voicemail—with people who project positivity, peace and joy.

Niecy relies on positive people she calls touchstones who help bolster her mood. “There are those people and moments that teach you and make you stronger,” she says. That thinking applies in her professional life, too. “I try to be someone others want to work with and have on set.

I strive to be a positive and nice person because I think it’s important to be a team player. There are no divas in my house.” 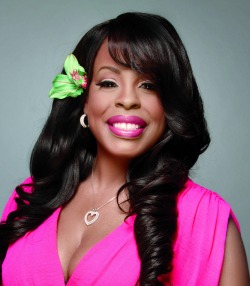 Niecy says she has a similar view when it comes to parenting for her son, Dominic, and daughters, Donielle and Dia. “I know I can’t control what they’re exposed to outside of our house, but in here, there’s no flicking on reality TV that highlights people yelling, fighting and feuding. I don’t want that energy in my house,” she says.

She’s not against all reality TV programming. Niecy hosted the Style Network’s Clean House, which featured a cleanup-and-renovation crew that went to the homes of families in need of decluttering. But she’s choosy about what shows—reality or otherwise—air in her house. “There’s no such thing as just a TV show. I don’t want those negative words or messages in my house. And for me, purposeful positivity includes what you watch on TV, read in books or listen to on your MP3 player.”

The power of hugs

When her kids were younger, instead of sending them to their room or banishing them to time out, Niecy encouraged her kids to solve their quarrels with physical displays.

“I’d make them hug each other,” she says. “They’d be so angry and say, ‘I don’t want to hug him or her.’ But I’d make them hug each other until they’d start laughing. Once they’d giggle they could go back about their business with the understanding that it’s OK to disagree but to deal with that disagreement from a place of love.” She holds herself to that same standard when navigating her relationship with her kids or her husband, Jay Tucker.

To ensure everyone in her house has the chance to be heard, Niecy relies on an old-fashioned egg timer. “To hear each other out, we’ll pull out the hourglass and one person can say what they need to uninterrupted until the sand runs out. Then we flip it and it’s the other person’s turn. That way there’s no jockeying to talk over each other without either person ever really being heard. And the time to flip creates a break to absorb what is being said.”

Niecy also relies on her golden rule for conflict resolution as well as facing controversy or decision making. “I always ask myself, ‘Is an action serving you, edifying you, making you better or stronger and more equipped to handle life in a positive way?’ And if I can’t answer all those questions with ‘yes,’ I find a different behavior and try it out. It’s never too late to test drive a new positive attitude.”

Gina Roberts-Grey is a frequent contributor to Live Happy magazine.