The cast and crew of Good Morning America may have to get up early every day to report the news, but the cameraderie and sense of purpose on set keeps them happy—with a deep sense of purpose. 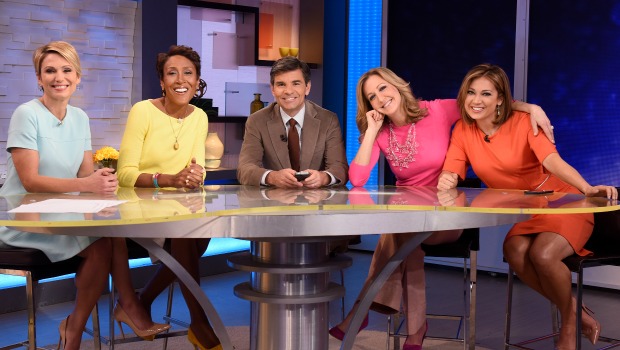 Learn why America's favorite newscasters love their work—and their coworkers.

Imagine getting excited about the alarm clock ringing before 4 a.m. because it’s time to get up for work. Not so appealing? Don’t tell that to the cast and crew of ABC’s Good Morning America.
Since 1975, stylists, lighting and stage crew members, production staff and the on-air personalities America tunes in to for the news headlines of the day have been enduring early start times, long hours and a rigorously demanding pace. And they all say there’s no place they’d rather work.
“I still get chills,” says Robin Roberts, co-anchor. “Being able to say, ‘Good morning, America’ and to know we’re starting people’s days makes me incredibly happy. I really look forward to that part of my day.”

Dozens of journalists have said those words while sitting behind the anchor desk Robin currently shares with co-hosts George Stephanopoulos, Lara Spencer, Amy Robach and Ginger Zee. And even though the current team has only been together for two years, their cohesive rhythm and ease with each other makes it seem like they’ve spent a lifetime working—and playing—together.
Lara compares the supportive environment on set to that of a basketball team. “If one of us doesn’t have the shot, you have the confidence in each other to pass the ball and let a teammate shoot. We’ve got great chemistry.” Which is a good thing, as Robin adds, “We spend as much, if not more, time with each other some days as we do with our spouses and partners, children and pets.”
All that devotion to the show has paid off. Good Morning America has earned numerous awards and nominations and frequently wins the television ratings war, repeatedly outperforming the competition in weekly polls.

The secret to their success: trust. “This can be a cutthroat industry. But there’s no stepping on, or over each other, here,” Robin says. “I can look at George and know what he’s thinking. We have a cadence, and I know when to stop talking because he wants to chime in or vice versa. We all truly trust each
other and know everyone has each other’s back.”
George agrees that “mutual respect” is one of the team’s strongest assets. That trust has gotten members of the cast through good times, like the births of numerous cast and crew members’ children and grandchildren as well as Ginger’s wedding in August 2014. It’s also bolstered morale in some challenging times, too.

After publicly battling breast cancer in 2007 while remaining on-air, Robin was diagnosed in 2012 with myelodysplastic syndrome, a bone marrow disorder that affects production of blood cells. She required several rounds of chemotherapy to prep for a bone marrow transplant that kept her away from the anchor desk for several months while she rebuilt her health  and strength.
But she never felt far from her work family, and that connection to both her co-workers and job helped her through some tough days.
“In the hospital or at home, I could turn on the TV and they’d give me a shoutout. I felt their love. But the respect and support at work goes deeper than that,” she says. “When I announced I was ill again and that I had to step away from the show to focus on my fight, one of my colleagues stepped in and said ‘our fight.’ I get weepy when think about that, that level of true support and genuine caring.”
***
Read the entire article on the cast of Good Morning America, and a whole special section on Happiness at Work, in the June issue of Live Happy magazine.
(Visited 188 times, 1 visits today)
Popular Articles