Goofing Around With Jim Gaffigan

Jim Gaffigan toys with the props and delights the creative team at our funniest magazine cover shoot yet. 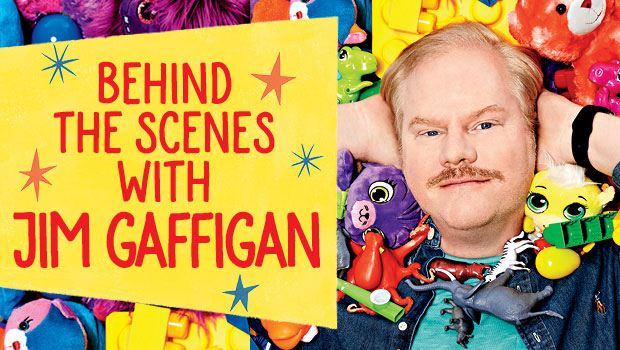 For the cover shoot of our July issue with comedian and five-time father Jim Gaffigan, Live Happy Creative Director Kathryn Finney had a very special assistant: her daughter Madison. We talked with Kathryn and Madison about what it was like to work together with a comic genius and veteran photographer Mary Ellen Matthews at this over-the-top shoot.

LIVE HAPPY: As Live Happy’s creative director, what were your first thoughts on the possibility of Jim Gaffigan as the July cover? 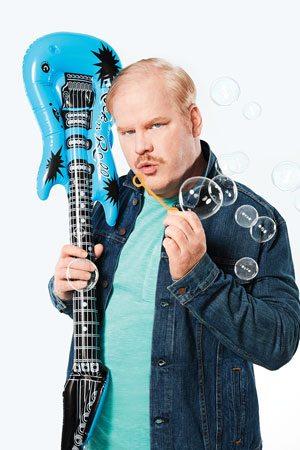 KATHRYN FINNEY: My daughter, Madison, brought up Jim Gaffigan’s name one evening about three years ago. She said he was really funny and that I would like his comedy. Our family watched a Netflix special, and we immediately fell in love. I was so excited when we had him as a cover option. I told my daughter and she immediately asked, “When is the shoot? Can I go?”
LH: How did Madison get involved in the shoot? What was it like to work together?
Madison loves everything about design. She’s been on several shoots with me since she was very young. Many of those shoots have been in New York City. At the last minute, it worked out that Madison could come along, so I gave her the assignment to capture images and video behind the scenes. 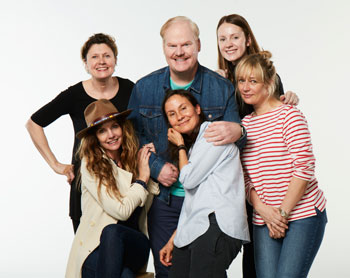 She had never been to a photo shoot with a celebrity, and I like to push people (even my daughter) right into the middle of things and encourage them to learn. That is how I learned as a young designer. I could tell Madison was intimidated by photographer Mary Ellen Matthews’ talent and experience, with her Saturday Night Live credits and iconic images of rock stars over the years. Mary Ellen even looks like a rock star.
Then in walks Jim. Big, bold, and he hits the scene joking. “I know I’m sick [he had a cold] but when I leave here today, you are going to be saying, ‘That Jim Gaffigan was the best person Live Happy has ever worked with.’ ”
After introductions, he learned that my daughter and I are from Iowa. The first thing that he asked us was, “Have you been to Zombie Burger?” Zombie Burger is a hip burger joint in downtown Des Moines. It is delicious. That was the beginning of many conversations about Jim’s favorite topic: FOOD.
LH: Describe the New York shoot location and vibe.
Mary Ellen chose the location, Pier 59 Studios in NYC. Many fashion shoots take place there. I could see that it had lots of space where people could really spread out, but there was also a sense of privacy. Mary Ellen balanced the natural light from all the bay windows with the provided light for the perfect mix for our subject. Jim, of course, joked about how she was going to deal with his pale complexion. 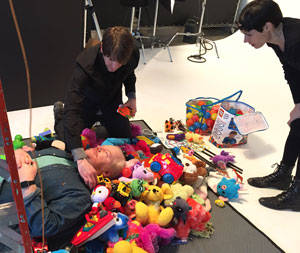 The concept for the shoot emerged from a Father’s Day theme. From what I know, Jim’s whole life is planned around his wonderful family. He says at the beginning of his latest Netflix special, Cinco, that he has now done one comedy special for each one of his kids. On that special, he says, ‘Now I’m done.’ I know this is just not true! He has so much energy.
With that in the back of my head, I started to throw out concepts. Jim was very thoughtful about his image. I kept returning to the idea that he is just buried in fatherhood. So, I thought of that iconic image of the film American Beauty where the actress Mena Suvari is buried in rose petals. I’ve always loved that image. Why not bury Jim Gaffigan in toys?
That concept was a winner with Jim. He even mentioned it at the shoot. This was his American Beauty moment. And he didn’t mind my using the term “bury him” on the shoot.
LH: Was Jim making any jokes about the toys or bubbles in the process? How did the logistics go? 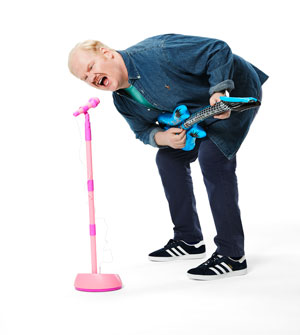 With the help of a fantastic, resourceful set designer, Chad Dziewior, everything fell into place. The weekend before the shoot, he texted images of colorful props he had found. I’d text back other ideas and he would find what items were in my head. The ideas were flowing and the pile of props fell into place.
Even though he was the subject of our cover and the center of attention, Jim’s wardrobe remained “true to Jim” and how he presents himself in life and onstage. He is super casual and understated. Yet, he had everyone in stitches on set. He played along, fully embracing the toy props. We threw an inflated guitar his way—he rocked out. We gave him a pink microphone, and he followed it with a mic drop. We gave him bubbles, and his play in front of the camera was priceless. We could have gone with different scenarios all day, but we had too much to choose from already. He was a perfect subject for Live Happy.
LH: How does Jim embody the Live Happy brand and mission?
I was just so impressed by how collected he was. He was very calm, and when Mary Ellen or I would ask him to do something, he was very kind and accommodating. He engaged with everyone. He asked where they were from, if they liked the same restaurants as he liked, and he made everyone laugh. Jim welcomed the staff that was hired to style him like family. He is everything Live Happy should aspire to in looking for individuals with interesting stories to tell. He brings his family with him on tour. He is so proud of his family and his mission. He talked about how he wants to make people feel better when they come to see his show. He finds that is a fantastic thing he has been able to do. When he said that, I truly believed he has a gift. He spreads the gift of happiness.
All of us at Live Happy were shocked to learn of Jim’s wife, Jeannie’s, recent nine-hour emergency surgery to remove a brain tumor and are sending positive, healing thoughts to her and the whole Gaffigan family as she recovers. Jeannie—always with Jim’s best interests in mind—called to check in during the shoot and joined in the fun, viewing screen images from photographer Mary Ellen. How Jeannie and Jim have handled such a critical health issue with grace, courage and of course humor just adds to our respect and admiration for them.
LH: How long have you been a fan of Jim Gaffigan? Do you have a favorite Netflix show of his or series of jokes that makes you laugh every time? 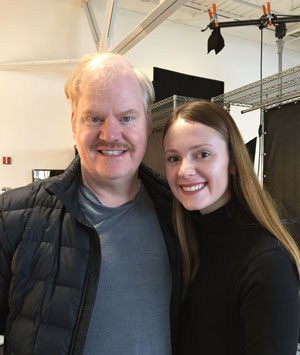 MADISON FINNEY: I’ve been a fan of Jim Gaffigan for more than five years. I have seen all of his Netflix specials and have replayed them in the background multiple times if I’m working on a design project or other homework. I’ve also shown his specials to some of my friends and converted them into Gaffigan fans, too. My boyfriend and I had one of our first dates at a show of his in Los Angeles at the Greek Theatre. I laugh the hardest when he is doing the voice of what he thinks his audience is thinking. Also, the faces he makes in between the jokes are the best.

LH: Was he different at all at the shoot than you would have imagined him to be from watching his stand-up routines?

Jim had absolutely no ego. I didn’t know what to expect; I’ve only met a few celebrities in my life, but he was so humble. He asked me about where I grew up and about my last two summers in Los Angeles, and about my plans after graduation. I was surprised that I managed to keep my cool! We bonded over both loving Iowa’s Zombie Burger.

LH: What stood out for you about the experience? What did you learn about your creative director mom or the creative process during the day? 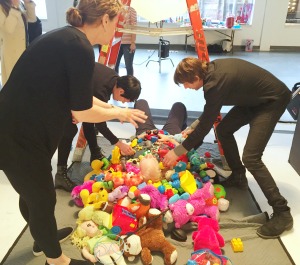 I am very excited to make a move to New York. That is where I’ve landed my first job. This shoot made me realize how little time you have to get the perfect shot when working with­­­ talent. Lastly, everything takes twice as long and takes twice as many people as you think it will to get the job done. From my experience of observing and helping document this photo shoot, I think people in New York really love to work and take a lot of pride in what they do. I’m excited to get started and be a small part of the madness.
Seeing my mom go from reading her list of ideas on our car ride to orchestrating and executing an idea is always amazing. I’ve assisted my mom on a lot of shoots, but seeing your favorite comic on­­­­­­­­­­-screen and off-screen was so much fun and surreal. I’m so thankful for the experience.
(Visited 376 times, 1 visits today)
Popular Articles