It’s been 36 years since Olivia Newton-John starred as the ultimate teen dreamgirl in Grease, and the singer/actress is still going strong today. 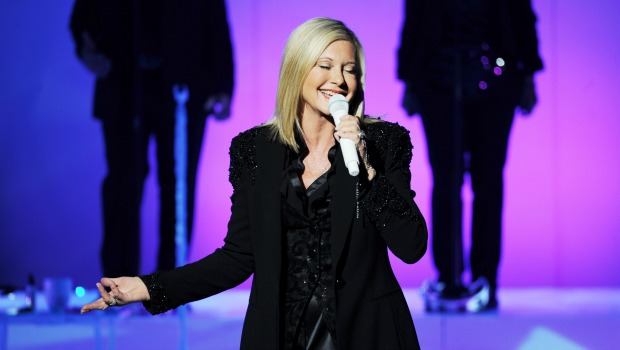 Olivia Newton-John returns to the spotlight.

Olivia Newton-John is a flirt. On a recent Friday night, she begins her “Summer Nights” show at The Flamingo in Las Vegas by shimmying to the edge of the stage as she sings the opening bars to her epic hit “Have You Never Been Mellow.”

The sold-out audience of 750 rises to their feet. Then, as they settle back down, Olivia coos, “I’m going to do a couple of songs from a movie where I got to dance with…” Everyone jumps up again, erupting into gleeful whoops. They anticipate, of course, that she will finish that sentence with “John Travolta” and launch into their favorite tunes from Grease, her 1978 U.S. film debut that made her a superstar and remains the highest grossing American movie musical of all time.

Olivia pauses, dropping her mic to her hip as she soaks in the adulation. After a few seconds, she smiles brilliantly and continues. “A movie where I got to dance with…Gene Kelly.”

If Olivia is toying with her fans as she resumes her “musical journey” with the title song from Xanadu, they are more than happy to be her playthings. Some have paid up to $250 for a ringside seat and the chance to have their photo taken with her during a meet and greet.

“She was my first crush,” says a middle-aged man from Seattle who has brought along the Xanadu LP for Olivia to sign. A Los Angeles film professor who lived for several months in Australia carries a glossy photo of Olivia, vintage mid-’80s. He remembers going to see her perform when he was homesick. “She made me feel at home,” he says.

For generations of admirers, Olivia Newton-John has provided the soundtrack to their lives. They might have shared a first kiss to “If You Love Me, Let Me Know,” become engaged to the strains of “I Honestly Love You” and hit the ballroom floor for their first dance as a married couple to the wedding band staple “Hopelessly Devoted to You.”

Back in the early ’80s, some ventured nervously into their first aerobics class, inspired by Olivia’s admonition, “Let’s get physical, physical.” (“I’m proud of that song,” she tells the audience, conspiratorially. “In my whole career, it was the only song that was ever banned.”)

When facing a loss later in life, many found comfort in songs like “Let Go Let God” or “Learn to Love Yourself” from Olivia’s deeply spiritual 2006 album Grace and Gratitude, featuring instrumentals and vocals for meditation and healing.

Still creative and vibrant at 65

If there’s a timeless quality to her songs, the same can be said of Olivia herself. Dressed in an elegant black tuxedo with peg-legged pants and high-heeled ankle boots, her blonde hair in a shoulder-length bob, it’s difficult to comprehend that it’s been 36 years since her Sandy Olsson first fell in love with John Travolta’s Danny Zuko. At 65, Olivia says she has never
felt healthier, more vibrant or, especially, more creative.