With a bold new show on Broadway, Modern Family’s Jesse Tyler Ferguson has no interest in playing it safe. 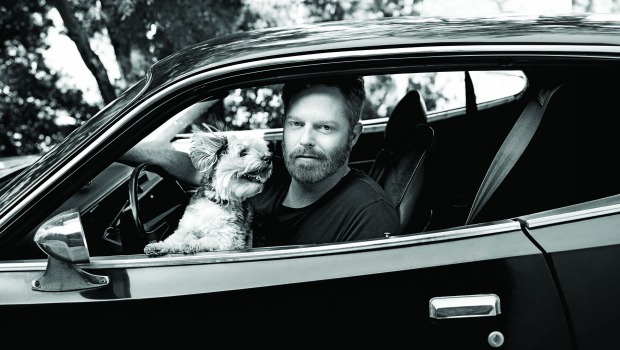 With a bold new show on Broadway, the multitalented star of Modern Family is all for taking risks.

Eric Stonestreet, who plays Jesse’s husband, Cameron Tucker, on the long-running ABC sitcom, also questions his honesty. “Jesse said that?” Eric asks incredulously. “That might be true of me, but it’s certainly not true for him.”

“Sometimes,” Jesse has said, “I show up on the Modern Family set very, very cranky.”

“Jesse does not get cranky,” Ty, who plays Phil Dunphy, insists. “He gets a little bit pink in the face, and you know he’s stressed out. What happens is that Jesse is such a gentle, sensitive soul that he gets stressed not when he’s fighting with somebody—because he does not fight with anybody—but by conflict in general, by other people who are having tantrums.”

OK, the five-time Emmy-nominated actor may not be the type to pitch a fit, but Jesse says lately he has been thinking about starting a meditation practice or even seeing a therapist. Life, he says, has provided an abundance of good fortune and he wants to be able to enjoy
it all. “I get overwhelmed very easily,” Jesse says, sounding a bit like his Modern Family alter ego, the high-strung lawyer Mitchell Pritchett.

Sometimes he feels so jittery he needs to retreat to a quiet place to “take a few deep breaths and tell myself it’s all going to work out. You just have to tackle one thing at a time.” It’s at these moments that he calls his husband, Justin Mikita, who has an unflappable temperament, “to see if he can talk me off the ledge.”

Life on the edge

Still, Jesse far prefers the ledge to living inside his comfort zone. His definition of a rich, vibrant life is one that’s over flowing with bold risks, new challenges, deep relationships and being on the front lines of the causes that you believe in. That means embracing the full kaleidoscope of emotions, including, at times, anxiety, fear and self-doubt.

“As everyone does, I always want to live in a place of utmost happiness,” Jesse says. “But that’s just not possible. There are going to be times when you feel really down and times when you feel like the world is against you and it’s impossible to accomplish things, and you wonder if you’re ever going to be as happy as you want to be again. I’ve learned that even in those down times happiness still exists within you. You just need to be OK with the shift.”

Small wonder Jesse experiences a pounding heart on occasion: He’s juggling simultaneous roles in film, TV and theater. For the past few months, he’s been shuttling between the Modern Family soundstage on the Fox lot in Los Angeles and another building on the lot where he’s voicing the yoga-loving Shangri Llama in this summer’s Ice Age: Collision Course, the fifth installment in the animated franchise. And every three weeks, he flew to New York for rehearsals for Fully Committed, a one-man Broadway show that began previews on April 1 and will run for 15 weeks.

Since Broadway is “where I cut my teeth and where my true passion is, to be able to do something as exciting as a one-man show on Broadway, that’s like the cherry on top of the sundae right there,” Jesse says. In his first return to Broadway in a decade, Jesse plays Sam, an out-of-work actor who mans the reservations line at a hot Manhattan restaurant. There are also desperate callers, panicked waiters, a haughty chef, a skittish maître d’. In total, it’s a cast of 40 men and women of all ages and nationalities. Jesse plays them all.

“I read the script and said, ‘OK, I have to have a French accent, a British accent, a Southern accent. I’m not just doing monologues, this is dialogue with myself.’ I thought, ‘this is really terrifying!’ ” The terror was the selling point. For me if you’re not scared by something,” says Jesse, “maybe it’s not worth doing. What really creates a better artist, in my opinion, is putting yourself at risk. Fear is a really great motivator.”

As if multiple roles across three different mediums weren’t enough, Jesse has another plate in the air. A passionate foodie who loves to cook and entertain in the Spanish Colonial home he shares with Justin and Leaf, their 7-pound Maltese-terrier mix, he’s just launched a food blog on his website (jessetylerferguson.com) with his good friend Julie Tanous, a professional chef and recipe developer.

The two met at a dinner party and bonded over their culinary passions. “I would love to put myself through culinary school if I had the time,” Jesse says. “If this acting thing ever stops, I would be very happy in a kitchen.” For now, he’s learning professional techniques from Julie in his spacious, well-appointed kitchen. “Julie came over a few times and we started cooking,” Jesse says. “I’d ask her questions like, ‘How should you actually dice a tomato?’ She’s been a private tutor for me, and we had such a good time in the kitchen, I thought, ‘We should document this and share it.’ ”

To read the rest of this article and get the full details about Jesse Tyler Ferguson's life and work, pick up the June issue of Live Happy magazine.