Mayim Bialik Is Geeking Out on Happiness

Mayim Bialik from ‘The Big Bang Theory’ is quite content with her perfectly imperfect life. 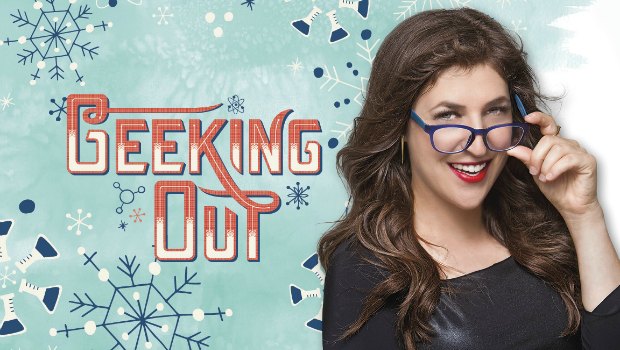 The quirky 'The Big Bang Theory' star is quite content with her perfectly imperfect life.

“There’s an unintended bit of art imitating life,” says The Big Bang Theory actress Mayim Bialik of her role on the CBS sitcom as socially anxious braniac Dr. Amy Farrah Fowler, one of the most lovable and quirky, strong and intelligent female characters on television.

“I based Amy on a combination of a few professors I know, but there are unintentional little bits of me in her, too. I’m pretty socially awkward and was a late bloomer,” Mayim says. “Even though I was pretty outgoing, I wasn’t a showbiz ham-it-up kid. I was raised in a very expressive and loud Eastern European household where I was taught to speak up for myself and debate at the kitchen table. But, like Amy, I don’t feel confident socially. I’d rather stay in my PJs and watch award shows from my sofa at home than be on the red carpet.” 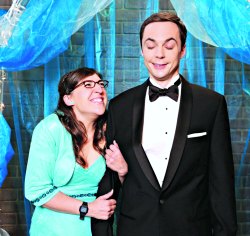 The 40-year-old’s portrayal of the blunt-tongued, romantically challenged Ph.D. has earned Mayim the admiration of millions of fans of the show and several award nominations and wins, including the 2016 Critics’ Choice award for best supporting actress in a comedy series. Both Mayim and her alter ego hold neuroscience-related Ph.D.s. Mayim’s is in neuroscience; Amy Farrah Fowler’s is in neurobiology. “I studied how brains work and she slices them apart,” she jokes.

“There’s perhaps a bit more crossover of my education and that of my character’s than there is for a lot of actors. But it’s a total coincidence that my two worlds collided,” she explains. “Actors are required to play all sorts of roles they have no experience with. The writers and cast of our show do an incredibly amazing job at scripting and portraying people in fields they don’t have formal training in.”

Her affection for science was seeded on the set of Blossom and nurtured in her undergraduate years in college. Yet that real-life advanced degree might not hang on Mayim's wall if not for crossing paths with one college-age tutor when she was a teenager.

“My life is perfectly imperfect. It’s messy and sometimes chaotic,” she adds. “I lose my keys when I’m already running late, my dryer eats one sock and I find myself needing to be two places at once. But those, and similar, everyday occurrences are part of a ‘real’ life.”

As the star of the popular NBC sitcom Blossom, which aired for five seasons from 1990 to 1995, Mayim was tutored in her dressing room instead of attending a traditional school with spelling tests and recess. And schoolwork wasn’t necessarily her favorite part of the day.

“I didn’t learn the way other kids did; science definitely didn’t come naturally to me,” she says. “But I had an amazing tutor, an undergraduate dental student at UCLA who’s now a dental surgeon. She was my first female role model geared toward science and made the topic accessible to me. She showed me that I had the ability to pursue science or anything I was interested in.”

Mayim is proud of the examples set by the cast and crew on The Big Bang Theory. “It’s gratifying when people point out that we’re role models to young girls wanting to pursue scientific careers,” she says. “That’s the best way I can envision to give back to the woman who taught me that my scientific sky had no limit.”

Mayim credits family role models for the work ethic that led to earning undergraduate degrees in neuroscience, Hebrew and Jewish studies in 2000. “I was raised in a very eclectic, Bohemian environment, but it was one that also featured a very strong educational ethic and the importance of earning a college degree,” Mayim explains. “My grandparents were immigrants and they impressed the importance of working hard and striving to find and reach my potential.” 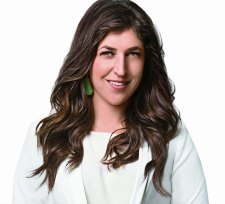 As a college student, Mayim quickly shed her Hollywood skin, immersing herself in campus life. Even after a grueling battle with an organic chemistry course, Mayim says college fed her voracious appetite for learning. “I was in awe of the neuron and absolutely fell in love with it. I loved how it was the smallest, most intimate level at which we could understand each experience and interaction we had as humans.”

Completely enmeshed in what she calls an “ordinary life”—she gave birth to her first son, Miles, (with then husband, Michael), in 2005 while working on her Ph.D. After finishing school, her days were filled with making organic shampoo and baby food for Miles and then his brother, Frederick, born in 2008. “I’m a very crunchy granola kind of mom,” she says.

Mayim credits her self-proclaimed “ordinary life” with helping her maintain her sense of grounding and balance. “I don’t have a housekeeper or a nanny to take my kids while I attend a Pilates class. I’d never pass judgment on those who do because that’s none of my business. Those things just aren’t right for me,” Mayim says.

Mayim’s strong connection to community and tradition contribute to her daily happiness.

“I really love autumn and all the reasons to celebrate as a family. My sons’ birthdays are in early fall and we have the Jewish New Year in September.” Celebrating harvests and holidays within their four walls, as well as among family, neighbors and friends, have created some of her family’s favorite memories.

“We love the rise of jack-o’-lanterns in LA, corn mazes and roasting pumpkin seeds. And my sons trick-or-treat annually with their father. Traditions and simple rituals contribute to helping maintain educational and emotional harmony for me and my children. It’s uplifting to rely on and take part in seasonal and religious celebrations.”

“My life is perfectly imperfect. It’s messy and sometimes chaotic,” she adds. “I lose my keys when I’m already running late, my dryer eats one sock and I find myself needing to be two places at once. But those, and similar, everyday occurrences are part of a ‘real’ life. They’re what thousands of moms and dads experience every day and I think that commonality with peers is comforting to all parents.”

However, Mayim admits she didn’t always embrace imperfection. “It’s something you have to come to terms with,” she says. “But accepting that you’re running late, forgot to wrap a birthday present or whatever imperfection that crosses your path means you’re living in the present. And that awareness allows you to soak up and enjoy all of life’s gifts granted every day.”

This is an excerpt from a longer feature. To get the whole scoop on Mayim, download our digital edition or pick up a print copy at a news agent or supermarket near you.

Want More? Listen to our podcast: The Perfect Parent With Stacy Kaiser

Gina Roberts-Grey is an award-winning writer whose work has appeared in Family Circle, SELF and SUCCESS.