The Tao of Tao 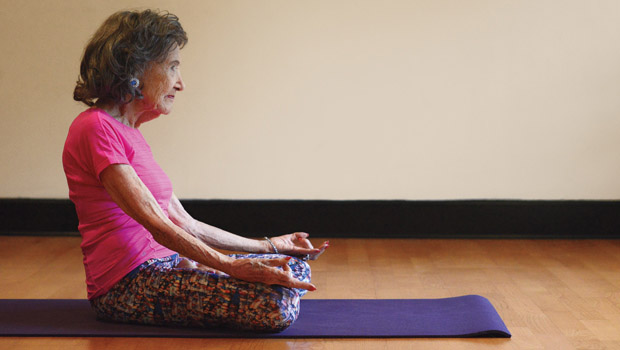 As a little girl growing up in Pondicherry, India, Tao Porchon-Lynch was fascinated by the sight of little boys on the beach “making funny shapes with their bodies.” She quickly learned that they were doing yoga, and she just as quickly learned that it was something only boys did; it simply wasn’t ladylike.

Today, that same defiance against convention keeps her going; even as she prepares for her 100th birthday in August, she continues teaching yoga classes about eight times a week in addition to maintaining a busy travel schedule. Not content to slow down or give in to the stereotype of what aging looks like, Tao—who now calls New York City home—continues to live life on her own terms.

Although she is small in stature, the energy that radiates from Tao is larger than life. Part of it comes to her naturally, she says, but learning to harness the power of that energy has allowed her to craft a remarkable life.

“I have always experienced the joy of living,” she says. Her uncle, who raised her, “instilled in me a sense of freedom and curiosity to explore the energy in things and in myself. Every single day, he gave me something to think about, which now I see was yoga philosophy.”

She also learned a gentle, determined brand of philosophy from one of her uncle’s friends, Mohandas, who was known to the rest of the world as Mahatma Gandhi. She would go on to march with him twice, including being part of the 1930 Salt March, a 24-day, 241-mile march to protest the British government’s monopoly on salt. At the time, Tao was just 11 years old, but it shaped her passion for activism and action.

Nine years later, she joined her aunt in France to help Polish Jews escape after Hitler’s invasion of Poland. Risking their lives, Tao and her aunt hid Jews in cement wine vats in the family’s vineyard in the Rhône Valley.

“When the Germans came to inspect the area, my aunt pretended to be courteous by asking, ‘Oh, wouldn’t you like to have a glass of wine?’” she recalls. “Inside the vat were people who were hardly breathing because of fear.”

That experience led to working with the French Resistance, and when World War II ended, her exotic look (she’s half French and half Indian) caught the attention of fashion designers. She modeled for several major couture houses of the day, including Coco Chanel and Marcel Rochas, which led to being one of the first seven French models to tour America after the war.

Remembering what her uncle and Gandhi had taught her about taking action, Tao seized the opportunity and met with movie studios, landing a contract with MGM. Her first part was in the movie Show Boat and led to minor roles in more than a half dozen other films as well as guest appearances on TV shows including The Bob Hope Show, I Married Joan and The Red Skelton Show.

Through it all, yoga has been a consistent, guiding force in Tao’s life, and she credits it with shaping her youthful mindset.

“Yoga opens up a new dawn of life for both nature and mankind,” she says. “As we breathe, we experience the beauty of nature within us. We become in touch with this inner energy and the wonder of life around us.”

The benefits of yoga, however, stretch beyond the physical world.

“Yoga also helps manage the mind, and what you put in your mind materializes,” she explains. “I only want to materialize good.”

And that, it appears, is what she has done. She is a yoga master who loves wine and milk chocolate and still wears high heels daily. Tao exudes a playful, childlike joy intertwined with nearly a century’s worth of wisdom.

“There is so much to do and so little time,” Tao reminds. “You haven’t seen enough of this earth. There is a lot more to see that is beautiful. Travel. Learn how to dance. Stay curious.”

There’s no question that Tao walks her talk; in 2005, at the age of 87, she took up ballroom dancing and has since won hundreds of first-place awards—always with partners some 70 years younger than she. In 2015, she wowed television audiences when she showed off those skills on America’s Got Talent—dancing to Pitbull’s “Fireball,” no less. The performance won her a standing ovation and mainstream interest.

“It’s been almost overwhelming,” she says. “Wherever I go, someone now recognizes me. I feel honored that people want to hear from me and take my classes.”

In 2012, the Guinness World Records declared her the world’s oldest living yoga instructor, and last year, she became the new face of activewear maker Athleta’s “Power of She” campaign.

In 2012, the Guinness World Records declared her the world’s oldest living yoga instructor, and last year, she became the new face of activewear maker Athleta’s “Power of She” campaign. Most recently, she was featured in the HBO documentary If You’re Not in the Obit, Eat Breakfast, alongside other 90-somethings including Betty White, Dick Van Dyke, Carl Reiner and more.

“There is too much publicity in the world on people growing old and slowing down,” Tao says. “To me, it’s exactly the contrary. I look for the next adventure. It was fun to be included in the documentary because everyone in it is doing something inspiring in their 80s, 90s and even at 100.

“It shows that age is in the mind.”

And what’s in Tao’s mind remains youthful and optimistic, keeping her excited for each new day.

“I wake up every day knowing that it will be the best day of my life—and it is,” she says. “Wake up with a smile on your face and the world will smile back at you.”