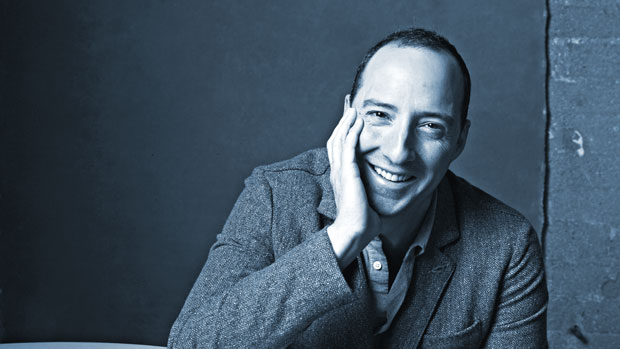 The Veep actor makes being hilarious look as natural as breathing.

Actor Tony Hale, with an amazing staff of writers and uber-talented co-stars, is tasked with the harder-than-it-looks job of making political mayhem hilarious in HBO’s hit show, Veep.

Luckily for him, pressure and stress are just the tools he needs to play Gary Walsh, the sheepish and devoted assistant to Julia Louis-Dreyfus’ egocentric, scurrilous politician Selina Meyer. Gary is Selina’s personal assistant or “body man,” tasked with anticipating her every need. Carrying his signature satchel, he is ready for any demand at a moment’s notice, toting newspapers, her schedule, makeup, sweeteners and snacks. In the 2015 “Gary Antoinette” episode involving a cake scandal, Selina rips into him, saying, “You are not a big shot, Gary, you’re a middle-aged man who sanitizes my tweezers.” 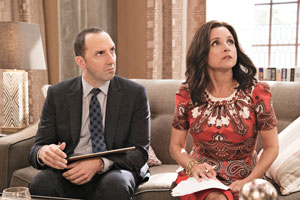 In a rare instance of self-defense, Gary responds, “You’re wrong. I’m your calendar, I’m your Google, I’m your Wilson the volleyball….I have let myself be laughed at, I have let myself be humiliated, and I’m happy to do it.”
The scene highlighted an underlying understanding and depth beyond the characters’ lighter comedic interactions.
“I enjoy sitting in the tension, with the audience knowing the crazy circumstances that are around me,” Tony says. “When you know there is a lot going on in that head, simply just sitting in that tension is kind of fun.”
He says that growing up, he was inspired by comics of similarly uncomfortable demeanors such as Tim Conway and Bob Newhart. “They just kind of sat in that awkwardness, in that tension and didn’t feel the need to push the comedy because everybody knew the crazy circumstances.”

In Laughter We Trust

With Americans so politically focused as of late, Tony isn’t worried that Veep might need to become a more serious reflection of our government. In fact, he thinks quite the opposite.

“Maybe people are having a hard time laughing at what’s going on right now, but hopefully they’ll feel the freedom to laugh at our show,” he says. “It’s kind of sad to laugh at some things, but go ahead and laugh at this.” 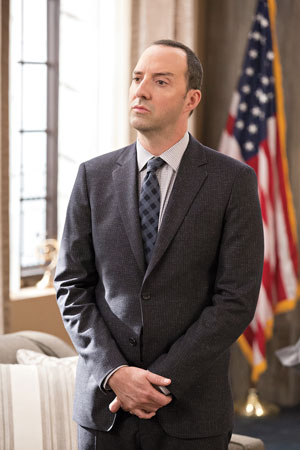 Veep’s actors make it easy to delight in our own discomfort watching their awkward onscreen antics. Tony says his seamless on-camera rapport with Julia helped to inspire performances resulting in his 2013 and 2015 Emmy awards for the show.
“It’s hard to underline how a chemistry like this resulted, but a lot of it is trust,” Tony says. He notes that everyone in the cast is comfortable speaking up if they believe that something is not working. “So you have that trust that’s like, ‘Oh man, yeah we’re on the same page,’ in terms of what the tone of the show is,” Tony says.
“Julia and I definitely have that support,” he continues. “We’ll be doing something and say, ‘OK, something funny could happen here…this could be punched up.’ Then the writers create this beautiful, hilarious foundation for us to play off of. It’s so much fun coming into a room and being like, ‘All right, what sort of comedy can we do here?’”
The trust between Tony and Julia runs so deep that she asked him to accompany her onstage at the 2013 Emmys to help her accept her own award—in character.
“That moment was terrifying,” he says, laughing. “She pitched the idea. She came to me and was like, ‘Hey, I think it’d be funny if you carried my purse.’ And she’s so good at what she does. And in the back of my head I was thinking, ‘Oh crap, she’s going to probably win and then I’m literally going to have to do this.’
“There was a moment when they called her name and we’re walking toward the stage, and I’m thinking, ‘Oh gosh, this could bomb really bad.’ And you just kind of connect to it, and thankfully, I think it worked.”

Nervousness, anxiety and self-consciousness are not typically thought to be the hallmarks of a natural-born entertainer, yet Tony wouldn’t have it any other way.

“Part of that was at first I didn’t know if I could make a living acting,” Tony says. “But then another part of it was that I was just very nervous about it. So I studied journalism, and then after college, I dipped my toe back in by getting back on stage. It was very nerve-wracking, but the more I did it, the more comfortable I got with it.”

He’s now been in the acting business more than 20 years. “You learn to surrender to the uncertainty,” Tony says. “Somehow, it works.” 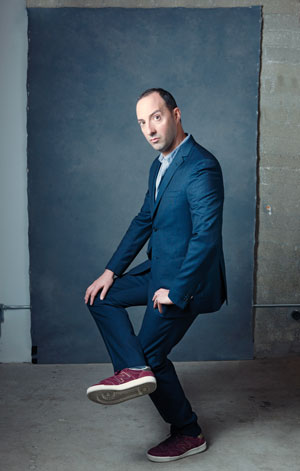 “Working,” as Tony puts it, might be the understatement of the year. After breaking onto the scene with parts on Sex and The City, The Sopranos and Dawson’s Creek (not to mention a memorable turn dancing to Styx’s “Mr. Roboto” on a popular Volkswagen commercial in 1999), he caught his stride in a big way in the movie Stranger Than Fiction and as Buster Bluth, the clueless black sheep of the Bluth family on the critical darling TV series Arrested Development.
While the roles of Buster and Veep’s Gary are vastly different on the surface, they share aspects of the anxieties and phobias that Tony knows all too well. While taking on these characters may seem nightmarish to some, Tony believes that getting to relive these feelings is a blessing in disguise.
“It’s a lot more fun to play it than feel it,” he says, laughing. “In reality, anxiety is very different than how it’s played out. In reality, sometimes a ton of stuff is going on in my head. I’m just trying to figure out, ‘Oh my gosh. What am I going to do? What am I going to do? What am I going to do?’”
Read more: Find Your Funny Bone

Tony’s success has allowed him to explore other interests. His first children’s book, Archibald’s Next Big Thing, was published in 2014. Beyond being a fun read for little ones, it also lovingly addresses many of the life lessons that Tony holds near and dear to his heart, like dealing with your fears and living in the moment. It’s promoted on adventuresofarchibald.com as “a story that reminds readers that, while looking for the next big thing isn’t a bad thing, big and beautiful things are all around us, right now.”
“Little kids are very precious,” Tony says with pride. “My daughter (Loy, age 11) asks a lot of questions. ‘What’s for lunch? What’s for dinner?’ When I take her with me on a vacation, she’s like, ‘What are we doing tomorrow?’ She tends to always look ahead, and she gets annoyed by me because I’m always saying, ‘All right, I hear you, and we can talk about that, but let’s look at what’s around us right now.’ “So it’s not necessarily having a heavy discussion, but it’s just kind of fun to find a different way to look at life. I mean, yeah, we can talk about what’s for dinner, but are you enjoying your lunch now?” 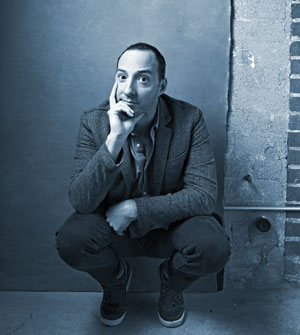 Tony’s mindset stems not just from his career successes, but also from a longtime commitment to prayer and meditation. His strong faith and spirituality even inspired him to co-found a sanctuary of sorts with a longtime friend, Kathy Karbowski. The Haven is a community of artistic-minded Christians who meet regularly to converse and support each other’s professional and religious endeavors.
“We both met a lot of people in the arts whose faith was important to them, but it was hard for them to find a safe community,” Tony recounts. “We began to get these people together, and really just support each other by attending each other’s concerts, shows or galleries.”
In the entertainment industry, Tony says, you spend a lot of time selling yourself, and having such support helps the group look outside of themselves to organize service work and be more a part of the community. “It’s very easy to get self-involved, myself included, and it’s because everyone wants to work….I’m very grateful toward those people in my life.
“Another reason why I think we did it was the tremendous amount of rejection in this business. Even though people say, ‘Hey, blow it off,’ it’s very hard not to take it personally. It hurts, but when people in your community see you for who you are, it’s easier to walk away from rejection because they speak more truth into your life about who you really are. It is incredibly life-giving, I think.”
While Tony’s cooperative spirit helps The Haven live up to its name for those who are a part of it, including his wife, Emmy Award-winning makeup artist Martel Thompson, his personal commitment to Christianity has been just as important to him over the years.

“It’s not just a part of my life,” he says. “My relationship with God is the majority of it. Obviously, everyone has their own journey, but this life gets crazy, and this business can get you wrapped up in things that sometimes seem so major but really aren’t when compared to what’s going on in the rest of the world, which can seem overwhelming.”

“By the way, I’m not great at this,” he added, meaning always living in the moment, prioritizing God and being of service to others. “But I am getting better.”

Gerry Strauss is a frequent contributor to Live Happy magazine. His last feature article was Ming-Na Wen, Agent of Change.