Top 5 Timesaving Tips for the Kitchen

I am always on the lookout for ways to shave minutes off dinner prep without sacrificing quality or nutrition. Here are a few tricks that even a food snob can embrace. 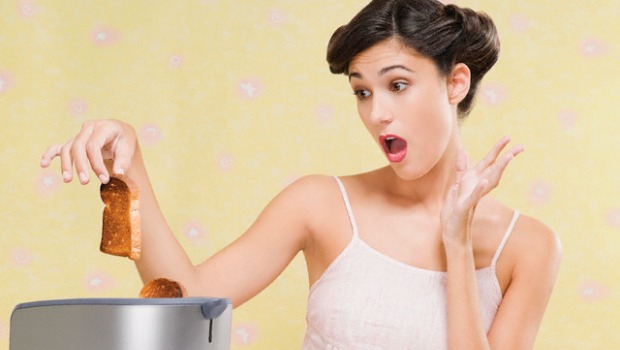 I love to cook. Cookbooks and food magazines make up a large portion of my reading for pleasure. Heck, I have a culinary degree!

But like anything that has to be done—sometimes multiple times a day, day after day—making time-consuming meals can be a burden. Sometimes, after a long day of work when the kids are hungry and cranky, it feels downright impossible.

It’s important to me that we eat together as a family. And I know how important it is for our wellbeing that the food we eat is not only tasty, but also nutritious—and that often means home-cooked.

Boil-in-bags, microwave cooking, ground-beef “helpers” are not going to work. So I am always on the lookout for ways to shave minutes off dinner prep without sacrificing quality or nutrition.

Here are a few tricks that even a food snob can embrace.

1. Hit the freezer—but not for everything

In an ideal world, we would all be eating seasonal, local vegetables grown by organic farmers and sold outdoors at adorable farmers markets. But this is reality.

– Spinach. Frozen whole-leaf spinach has already been picked over, washed, and blanched, so it’s ready to be thawed and sautéed with garlic and oil, or worked into another recipe, no pre-boiling necessary. (This also removes the guesswork that so often accompanies spinach: Will the nine large bunches you bought feed all your guests or boil down to about two tablespoons?)

– Peas. If it weren’t for frozen peas, we would all be relegated to using fresh peas for about three weeks when they are available in the spring, after painstakingly shelling them. Frozen peas can be thrown into stews at the end of cooking or tossed with pasta, cream and pancetta for a weeknight meal.

– Pearl onions. Have you ever cooked fresh pearl onions? By the time you strip that last papery skin off that last onion, you are ready to give a black eye to whoever invented Beef Bourguignon. (Two black eyes, if you par-boil them first.) Well, hallelujah, pearl onions are available peeled and ready-to-go in the freezer section, and you’ll never taste the difference. 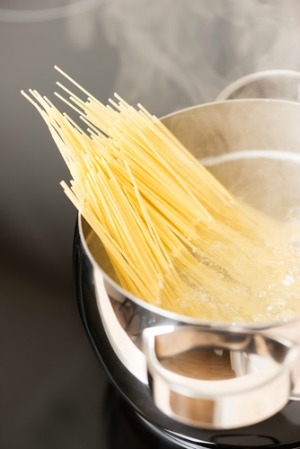 Take a page from the Italians and use that big pot of salted pasta water to cook other parts of the meal, saving time and an extra pot.

For example, if you are making the classic dish, orecchiette with sausage and broccoli rabe, while the sausage browns in a skillet, start cooking the pasta in boiling water, and after a few minutes, add the chopped rabe into the pot with the pasta. Then strain the pasta and broccoli rabe together, and toss in with the sausage. Genius.

3. Choose foods that are naturally fast

Stock your pantry, fridge, and freezer with those things that cook at warp speed. In the meat section, think ground beef, lamb, turkey, or chicken that can be used to make quick chilies, pasta sauces or meatballs. Also look at thin-cut chops or cutlets, all of which can cook on a grill or stovetop in a jiffy. For weeknight meals, avoid large cuts of meat as well as whole chicken and chicken legs, which need time to cook all the way through.

Almost all seafood is your fast friend: shrimp, mussels, clams, scallops, and thin fillets cook in under 10 minutes (many in under 3 minutes).

Instant couscous cooks in five minutes. Most pastas don’t take long to boil, but if you are trying to shave off minutes, use the small, thin varieties instead of the big shapes. Potatoes can be cut into small pieces and roasted at a high temperature in about 20 minutes for a delicious side. And of course, opening a can of beans takes 10 seconds (though we recommend rinsing them and tossing with a little salt and olive oil before serving).

Most vegetables cook quickly, but if you haven’t had time to shop and prep fresh vegetables, see the frozen section, above. If you have kids, microwave or boil frozen edamame or “medley” of peas, corn and carrots for a quick, healthy vegetable side that they will actually eat.

5. Let your dinner thrive on neglect

That obsessive flipping of your food, on the grill or in the sauté pan is often counterproductive to good flavor, and costing you time to boot. For the best possible crust, turn your food only once, timing it halfway through cooking. (Hint: often, if you try to turn your food and you find it’s sticking, it isn’t done yet; it will release easily when the crust is just right.

The same goes for many things that roast in the oven. Rather than turning those roasted potato wedges, squash slices, etc., just let them be until they’re done. You’ll avoid tearing them, which renders them greasy anyway, and you’ll get a nice golden crust on the side touching the baking sheet.

Lesley Porcelli has been writing and thinking about mostly food, for more than 15 years. She was a staff writer at Martha Stewart Living as well as an editor at Gourmet, and has a culinary degree from the Institute of Culinary Education. She lives in Central New York with her husband and three little kids, plus a staggering assortment of plastic sea creatures. When not authoring cookbooks, she occasionally blogs at Ugly But Good.