Michelle Gielan: Be a Happiness Broadcaster 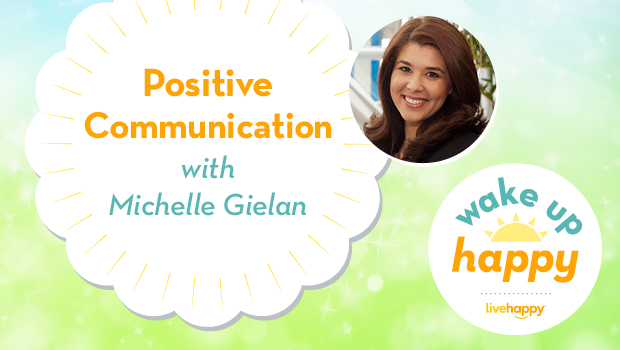 I was working as a national news anchor for CBS—my dream job—but those were difficult economic times, and the newscast was a constant barrage of negative stories; it seemed like there was no break from them. So we decided to do a series of interviews on how to foster greater happiness, even in the middle of challenging times: Not waiting helplessly until they’re over, but maintaining the belief that our behavior matters. And we interviewed experts who could tell people how to put the tips and advice into practice.

I decided I wanted to investigate positive psychology. What I came to learn is that, even in the midst of challenging times, I believe that my behavior matters. I believe I have the resources and social support system that can help me through it. When we have those things, our brains switch off the fight or flight reaction; switch off the panic button.

Lately I really like the concept of “Tabling it.” I have a little baby who is seven months old, so there are times when I am literally walking around like a zombie. My brain can get latched onto a negative thought and I start ruminating over and over. And I say to myself, we’ve been through this before; let’s table it. Let’s come back to it after we’ve slept for eight hours. And nine times out of 10, it’s not even an issue in the morning. Or else by then, I have the mental bandwidth to deal with it and find a solution.

I worked in television news, but what I’ve found is that in life, we are all broadcasters. We broadcast thoughts in our own minds, and we also broadcast while talking to other people. Any of that can be positive or negative. And what we put out there comes back to us. We have the power to shift and redirect the conversation to help others reorient to the positive.

What can we do to spread happiness today?

Michelle Gielan ​ is a partner at GoodThink, a positive psychology consulting firm, and an expert on the science of positive communication and how to use it to fuel success. She is also is an executive producer of The Happiness Advantage special on PBS, and formerly served as the anchor of two national newscasts at CBS News, as well as a correspondent for The Early Show.