More Than a Best Friend

They leap with joy when we come home, look at us with love, delight in our attention and sleep in our beds. Is there any doubt that dogs are family? 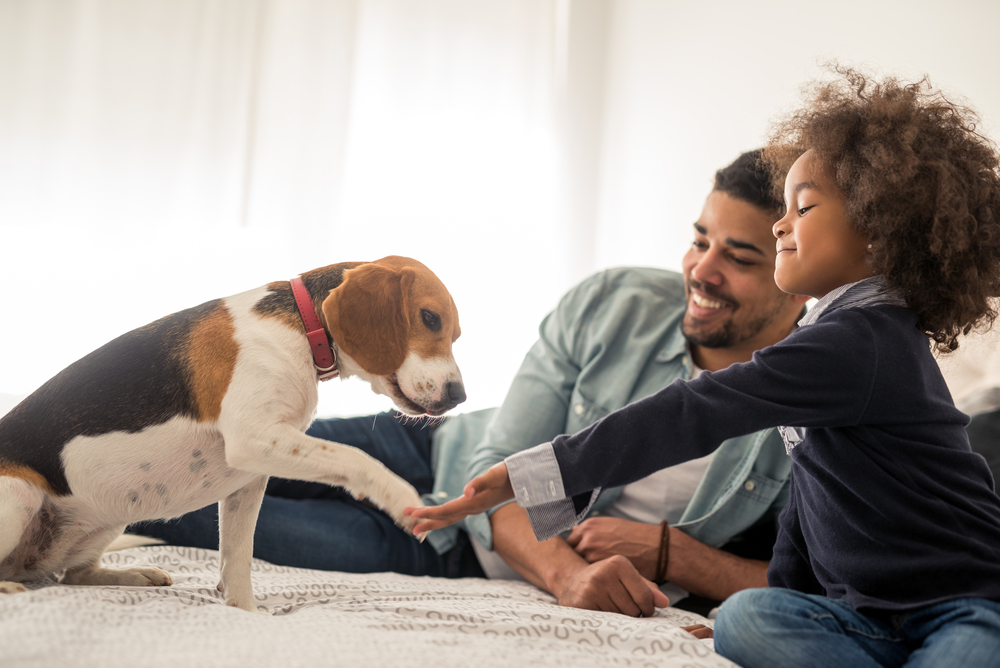 They leap with joy when we come home, look at us with love, delight in our attention and sleep in our beds. Is there any doubt that dogs are family?

Around July 26 every year, Megan-Mack Nicholson organizes a spirited celebration that is part family reunion, part birthday extravaganza. Although the site rotates to a different house every year, common party threads include cooking on the grill, wine and plenty of playtime. But two activities are absolutely non-negotiable and thought of as ritual for this extended family: a dip in the nearest body of water and, of course, a good, old-fashioned group howl.

Ten white German shepherds, all from the same litter, are the guests of honor at the appropriately named White Shepherd Puppy Party, and Megan-Mack describes their chorus, which might last a couple of minutes, as deafening.

“(It’s) so loud and beautiful, people and dogs in this huge family pack,” she says. “It gives me goosebumps just thinking about it.”

The puppies were brought into the world by Megan-Mack’s dog, Kaya, on July 26, 2005. She gave all but one of the puppies away to friends around Ithaca, New York, where she lives. She kept one puppy, whom she named Rayleigh.

“I just thought it would be fun (to throw a birthday party) the first year, and it was such an absolute hoot, we made sure to continue the tradition,” she says.

Meat cakes—plural—are another standard usually enjoyed at the puppy party. Megan-Mack starts with a traditional cake option, like strawberry shortcake, then adds “every meat under the sun”—hamburger, steak, chicken spread, tuna and even spam. The plurality of the cakes is important: The inaugural year, she only baked one large cake, and Kaya ate the entire thing in seconds, while the candles were still lit.

“It’s such a sweet gathering,” she says. “We haven’t missed a year. It’s important for all of us to connect because it is family.”

Claiming a dog—or 11—as family is something that might have raised more than a few eyebrows 10 or 20 years ago, but today it’s the norm. Rejecting the terminology of dog ownership, many people now choose to define themselves as guardians or pet parents and refer to their beloved canines as their fur babies or children.

“The data suggests that the majority of people consider their pet a family member,” says Allen McConnell, Ph.D., a Miami University psychology professor who studies the impact pets have on human health and well-being. His most recent data suggests the number is about 77 percent. But adoption into the family isn’t just about status.

In a study published in the Journal of Personality and Social Psychology in 2011, Allen and colleagues examined the amount of support 217 people received from their pets, be they dogs, cats or other animals, as compared to their best friends and family members.

“One thing we found,” Allen says, “was that people received as much support from their pet as they did from their parents or siblings,” although best friends were found to be a more powerful source of support than pets.

“For a pet to be as big as parents or siblings is a pretty strong statement,” Allen says.

Susan Burnstine can agree with that statement, strong as it is. Susan, a Los Angeles-based photographer, says 3-year-old Australian kelpie, Raven, is her family. And it is Raven who is getting her through the death of another beloved family member, Blue, also a kelpie, who died at the extraordinary age of 21.

“I lost both parents and everyone in my family,” Susan says, “and that was tragic like you wouldn’t believe, but losing (Blue) hurt more. I’m almost ashamed to say that. But it was like losing my child.”

For the first 8 months of her life, Blue was used as pit bull bait for an illegal dog fighting facility, but a local rescue group helped her escape. When Susan and Blue were introduced, it was love at first sight.

“She sort of found everything for me,” Susan says. “She set the path for my life. She was just a remarkable dog.”

As a photographer, Susan is known for the dream-like images produced from her homemade cameras and lenses. The first photo she took with one of her own cameras was of Blue’s nose, and that photo helped jump-start her career.

Before she made it as a photographer, Susan worked in the entertainment business, but she eventually burned out. While she tried to figure out her next step, she spent time hiking with Blue at LA’s Runyon Canyon Park. At the time, the park wasn’t well-attended, so Hollywood actors would frequent its trails. When Susan mentioned to a friend of hers, the late actor Michael Jeter, that she just wanted to hike with her dog all day, Michael suggested she do just that—but with other people’s dogs as well.

And so, Susan started a business providing not just hiking but individualized cardio sessions for the dogs of her clients, who are often actors. She still works with about 12 clients in addition to her work as a photographer, and Blue was the impetus for the whole operation.

“(Blue) was a Zen dog,” Susan says. “She would just know everything.”

Now, Raven is helping Susan cope with the loss of Blue.

“The only thing that got me through was Raven,” Susan says. “She has so much energy, I don’t have a second (to myself).”

Susan loves dogs more than anything in the world. “They are very empathetic animals. They’re all about their heart.”

The Science of Puppy Love

Susan, Megan-Mack and countless others share a special bond with their dogs, and recent research examines that interaction, describing how dogs pay attention to us like no other animal.

Scientists Adam Miklosi and Brian Hare, among others, have demonstrated that dogs can read human facial expressions and follow cues from gestures or the direction of a person’s gaze, and they can do so at least as early as 6 weeks old. No other non-human animal possesses this innate ability—not even our closest relatives, chimpanzees and bonobos, which need extensive human contact before they can demonstrate similar abilities.

Dogs are also the only animals besides primates that look humans in the eyes, and researchers from three Japanese universities found that this eye contact is especially significant. In a study published in the April 17 issue of Science, the scientists found that when people sustain a long gaze with their own dog, both receive a boost in the brain hormone oxytocin, which is associated with bonding and attachment. The findings suggest that dogs tap into the same mechanism that parents use to bond with their infant children.

Another study, published in the journal Behavioral Processes in January, measured the neural responses dogs have to known and unknown smells. The researchers found that the scent of the dogs’ owners engaged the caudate nucleus, the part of the brain associated with reward.

These studies represent only the tip of the iceberg in research on the unique relationship between people and dogs, and not all experts agree on how to interpret them. But the findings could indicate that both species are specially wired to live with one another, and this is a significant part of the reason humans incorporate canines into nearly every facet of our lives.

Working Into Our Lives

The brakes are out on Megan-Mack’s truck, and she’s not sure if it would pass inspection, but she doesn’t want to get rid of it because it reminds her of her dog. Earlier this year, Kaya passed away, and she has vivid memories of both of her dogs sticking their heads out of the window on her way to work.

“I want everything to be the same as it was when she was here,” Megan-Mack says, and that includes both of her dogs joining her for the workday.

Megan-Mack is a ropes course director and adventure center manager. When she was promoted to the position, which meant longer hours, she made sure her contract stipulated that the girls could join her.

“My sanity is all due to them at work,” she says. “They remind me to step outside and smell the air.” The dogs also brightened the days of customers and staff on a regular basis. Rayleigh is especially attuned to people’s needs and moods.

Megan-Mack says the attentiveness of dogs like hers comes from generations of loyal dogs trying to fulfill jobs. She believes the job of the modern dog is to be a part of the family. That certainly wasn’t always the case.

“The first role dogs played was very likely not as a pet,” says David Grimm, author of Citizen Canine: Our Evolving Relationship with Cats and Dogs, which came out in paperback in June. “It was more of a co-worker relationship.”

At the time, David says, humans were nomadic and had no time for pets. Dogs probably helped hunt smaller game and guard campsites at night. In return, dogs received food. And that’s the way things were for thousands of years.

As humans started settling down in villages, the status of dogs began to change. The first evidence of a more personal relationship between the species dates back 12,000 years to Israel, where archaeologists found a buried human cradling a puppy.

“Fast forward 10,000 years and some societies had pet-like relationships,” David says. “For example, the Romans are burying dogs in human cemeteries and breeding lap dogs.”

Not every culture had pets, and dogs generally suffered through the Middle Ages. But even in pet-friendly cultures, a distinct separation existed—dogs belonged outside. That would change in the late 1800s with the advent of flea and tick medicines.

“Now you can bring dogs indoors, and (then) they don’t smell like garbage, basically,” David says. “The separation breaks down, and a new (pet) industry arrives with dogs and cats… There’s a snowball effect, and the relationship is much closer.”

The relationship strengthened by the decade. Then, 20 or 25 years ago, our relationship with dogs evolved again. Smaller families, higher divorce rates and more people living alone, combined with the increasing isolation of the digital age, changed the way we look at dogs and cats, according to David.

“Everyone’s on the computer all the time,” he says. “Pets are the last bastions in your house that need to physically interact with you. Your dog’s not going to play on the Xbox or start texting and ignore you.”

All these factors have led to people claiming dogs as family, an idea that would have seemed strange to most people 30 years ago. But now, a majority of people report that their dogs sleep in their own beds.

“We’ve become so close,” David says. “It’s hard to imagine we can become much closer in the social sphere—you can’t get much closer than a member of the family.”