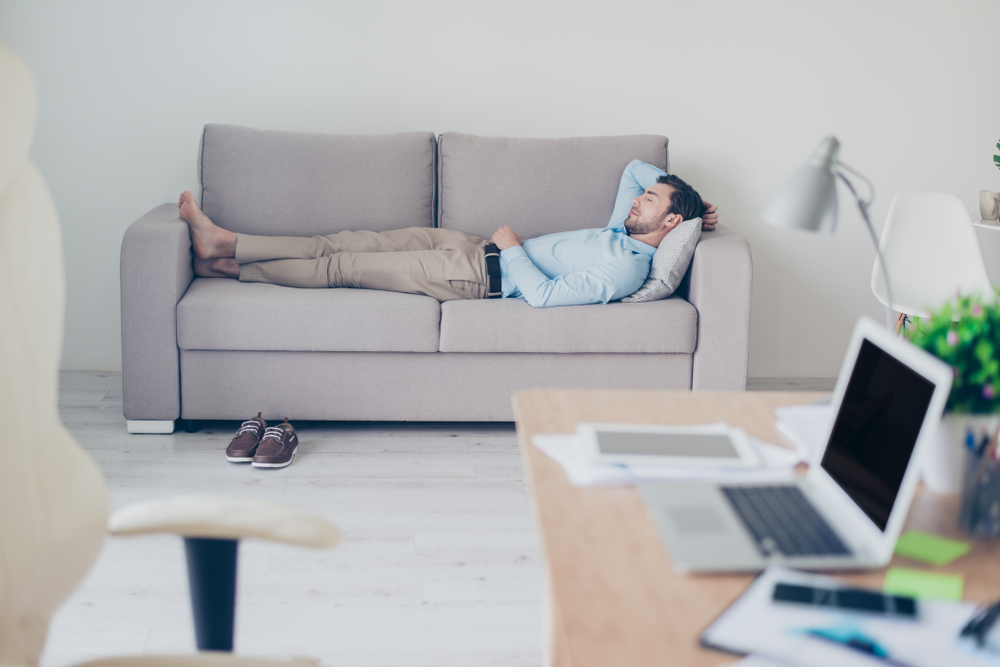 If you suddenly discovered you were deeply in debt, would you ignore it, or do whatever it took to get rid of that debt? For most of us, the answer is obvious, but you may be surprised to learn that, chances are, you’re carrying debt that you aren’t even aware of. And every day, you’re adding to it just a little bit.

The good news is, you can free yourself from this debt just by committing to a single simple activity every day for 15 to 30 minutes—and it’s free, enjoyable and can be done without any special training. It’s called taking a nap.

Recent research is shedding more light on the value of nodding off during the day. And now, some companies are warming up to the idea, realizing that a well-rested worker is happier and more productive. These companies are so enthusiastic, they’ve even created nap rooms, which can range from a simple darkened room with couches or recliners to areas with more elaborate “pods” created specifically for the business environment.

But it doesn’t take an official nap room or pod to get the benefits of a few minutes of dozing during the day. Huldah Brown, a service coordinator for Midland Area Agency on Aging in Hastings, Neb., keeps a pillow, blanket and timer in her desk drawer. On days when she’s tired or having trouble focusing, she says a 20-minute nap is all it takes to get herself back on track. Although she used to just rest her head on a pillow on her desk, she recently moved to a new office that has a couch—and her boss encourages her to use it for napping.

“I always feel more alert afterward, and it seems like I can do my job better,” she says. “On days when I take a nap, I’m able to get a lot more done—and I feel so much better at the end of the day.”

Huldah isn’t just dreaming up those results; a large and ever-expanding contingent of experts are touting the value of a nap. Not only can it improve your mood, but it also makes a tremendous contribution to your overall health. And in today’s world, where the Centers for Disease Control and Prevention estimates that more than 33 percent of us aren’t getting enough shut-eye at night, naps could prove to be the key to better living. In fact, they may even save your life: Getting the proper amount of sleep improves memory, strengthens the immune system, increases concentration and even decreases people’s risk of being killed in accidents, the American Psychological Association says.

“A nap crunches all the benefits of the first and the last part of [overnight] sleep,” explains Sara Mednick, Ph.D., a research psychologist and assistant professor in the department of psychology at the University of California, Riverside. “I was working in a lab [with a scientist] who was working on research about nighttime sleep, and his research showed that we need at least six to eight hours of sleep a night. But I knew people like myself who were nappers, who thought it didn’t make sense that you can feel as good as you do after a short nap, when the data show you need a full night’s sleep.”

So she set out to research the benefits of napping, and found that it had the same benefits of crucial non-rapid-eye movement (NREM), or “slow-wave sleep,” and rapid-eye movement (REM) sleep experienced overnight, only delivered in a highly condensed form. Since slow-wave sleep (which occurs earlier in the night) can improve memory, and REM sleep (which occurs later in the nocturnal sleep cycle) enhances creative problem-solving, the combination of the two packs a powerful one-two punch that Sara says can be delivered by a simple, properly timed nap.

“We have a mixture of different kinds of rhythms in our body and different biological pressures that allow for specific cycles to occur across the day and night,” she says. During the day, our bodies go through a cycle where “it’s a natural, biologically strong period to be sleeping,” she says, which is probably where the practice of taking a nap originated. During that period, the body can achieve both REM and slow-wave sleep. “So you get the same benefits of a full night of sleep in a much shorter time frame,” she says.

And if you suffer from sleep disorders, or if your life simply doesn’t allow you to get the amount of sleep you need, the Stanford Center for Sleep Sciences and Medicine says a 15- to 30-minute nap seven to nine hours after you wake up is the perfect way to refresh—without disturbing nocturnal sleep.

A nap might even be more invigorating than an overnight snooze. In 2008, British researchers conducted a study comparing the effectiveness of getting more nighttime sleep, napping and using caffeine when it came to overcoming that all-too-familiar afternoon slump. Of the three, a nap was found to be most effective. One big factor, they discovered, is the amount of time someone has been awake. In other words, even if you got eight great hours of sleep, you might feel the same dip in alertness 16 hours after waking up that someone who only got six hours of sleep would experience.

“The thing I’m most surprised about is that in studies, when you compare napping to nighttime sleep, the performance outcomes show the same benefit,” Sara says. “That should open our minds to not only having a regular sleep schedule, but a nap schedule as well.”

That’s a notion Arlene Matthews Uhl, professor of developmental psychology, former psychotherapist and author of The Complete Idiot’s Guide to The Psychology of Happiness, buys into as well. Napping, she says, is a form of downtime that allows us to reboot for the rest of the day. It not only clears the mind, but helps our mood and energy as well. On a physical level, she says, people who take naps regularly will likely be more hormonally balanced, and will be less susceptible to the effects of stress hormones, such as cortisol. That in itself is a natural boost to your mood.

“Apart from that, it is highly likely [you] will find that [you] have a burst of creativity after [your] nap time,” Arlene says. “And working in a creative state of flow is one of the keys to happiness.”

Get (Back) with the Program

While naps are a natural biological urge, many people feel the need to resist sleepiness and “stay productive,” even though volumes of research point to the fact that a quick nap may actually increase productivity and learning during the day.

One study conducted in California and reported by the Harvard Men’s Health Watch in February 2012 gave subjects a creative problem in the morning and gave them the afternoon to think it over and develop solutions. At 5 p.m., the participants were tested, but half of them had been allowed to nap and enter the REM sleep state, while the other half was only allowed to quietly rest and relax, but made to stay awake. While those who weren’t allowed to sleep showed no improvement in problem-solving, the nappers showed a 40 percent improvement in performance.

Similarly, a study in the December 2011 issue of Cognitive, Affective, & Behavioral Neuroscience showed overwhelming evidence that a daytime nap helped improve motor learning skills. The paper not only included a new study showing that both short and long naps were beneficial in improving motor performance, but recapped more than two dozen other studies emphasizing the improved learning benefits of daytime napping.

With so much evidence pointing to the value of naps, why aren’t more of us curling up on the couch during the day? It has to do with the American work-hard, play-hard mindset, the National Sleep Foundation says. While many countries, including Spain, France and Japan, see scheduled naps or “siestas” as part of the daily routine, Americans are prone to cram more activities into their day rather than schedule a nap.

Arlene believes there is still a definite stigma attached to daytime napping, and it may leave nappers feeling guilty for taking a break. One way to get around the guilt of taking a nap, she says, is to call them “power naps,” instead of the more leisurely phrase “catnaps.”

This way, you will feel less guilty, more empowered—and better able to take advantage of the many benefits a nap provides.

“This simple reframing can help us give ourselves permission to take a break and recharge,” she says.

She points out that, when left in a room without windows or clocks, people will naturally take a nap in the late afternoon—even if they don’t know what time it is. Studies on this date all the way back to the 1960s, when a German doctor furnished abandoned World War II bunkers like small apartments—except that they lacked clocks, calendars and windows that showed whether it was light or dark outside. The study consistently showed a pattern in which participants slept for six to seven hours, and then 12 hours later would return to bed for a shorter nap.

What that tells us is that “when [you] are free from environmental cues and follow…internal rhythms, napping quickly materializes as part of [your] everyday behavior,” Arlene says.

Allowing that natural rhythm to resume is a way of creating a happier, more productive day by improving mood, skills, memory, alertness and health, Arlene says. Like other self-care practices such as meditation, exercise and mindfulness, napping helps even out our moods, sharpens our awareness and allows us to tap into our creativity.

“As a result, our relationships tend to become more stable and calm as well,” she says.

“All [you have] to do is experience the effects of not being well-rested enough for the course of a few days to understand how difficult it is to be happy under such circumstances,” she says, adding that the connection between happiness and napping is too strong to ignore. “Maybe we need to invent a new name for it: ‘nappiness.’”