Norman the Therapy Pig Hams It Up

Some enterprising pig owners in North Texas have had their pet certified as a Therapy Pet, and the stressed-out students at SMU seem to love him. 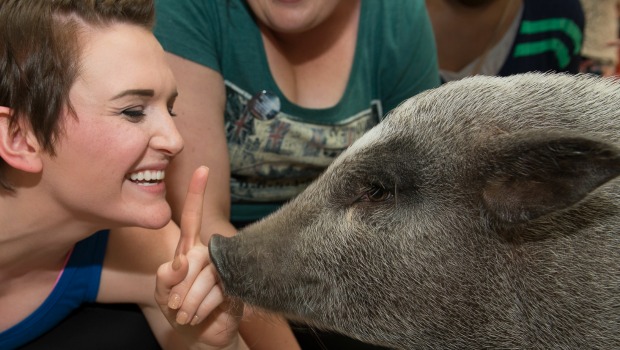 Not just for dogs anymore, a pig jumps on the pet therapy bandwagon

Bleary-eyed college students are hunched over their laptops in the library at Southern Methodist University in Dallas, cramming for final exams. Several lift their heads when they hear a loudspeaker announcement: “Norman the therapy pig is in the lobby for a study break." 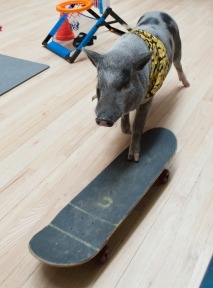 Laptops snap shut as students crowd the lobby to stroke the pig, snap selfies and grin at the first therapy pig in North Texas. Norman entertained the crowd by honking a horn, riding a skateboard, tossing a ball in a miniature basketball hoop, completing a three-piece shape puzzle and giving his handler, Misty Carter, a sloppy pig kiss. But mostly he good-naturedly accepted the students’ attention until they returned to their studies.

When Norman joined Shane and Misty Carter’s household last year, he fulfilled Misty’s longtime dream for a pet pig. He joined a growing menagerie of dogs and chickens at the couple’s comfortable log home in rural East Texas.

The Carters soon realized, however, that Norman was no ordinary pig. He quickly learned to respond to commands and took his place as an inside pet with the family’s four dogs. On a leash at local festivals, the 70-pound Juliana pig charmed neighbors wagging his tail and wearing a custom-made ball cap.

A good and humble pig

“He already knew the typical dog commands of ‘come,’ ‘stay’ and ‘leave it,’” Misty said.

Norman passed the pet therapy certification test on his first attempt. Since then Misty has taken him to visit nursing homes, assisted living centers, children’s hospitals and schools, particularly when Charlotte's Web is on the reading list. Her work with Norman is voluntary and often takes place on her vacation days.

The importance of animals

The importance of viewing nature, especially animals, appears to be deeply imbedded in the human psyche, says Alan M. Beck, director of the Center for the Human-Animal Bond at the College of Veterinary Medicine at Purdue University. Companion animals can help people feel less lonely, find comfort with touch and find reasons to laugh, he said.

Alan doesn’t expect pigs to replace the most popular therapy pet–dogs. But he sees a role for unusual therapy animals like pigs and even llamas. “They can play an important role in schools and other places where they are a novelty and pull upon children’s natural interest in animals.”

For Shane Carter, who compares life with Norman to living with a celebrity, Norman’s popularity is simple, “It’s just a feel-good thing.”