In Los Angeles and Dubai, two very different technologies are attempting to do the same thing: figure out how happy you are. 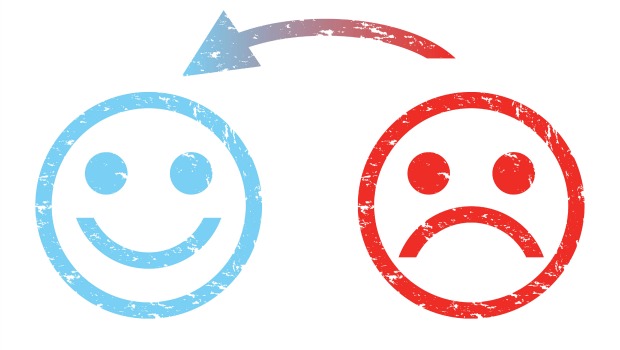 Step into a booth these days and you may either confess to a machine how happy you are, or it may tell you.

Therapy in a booth

In a University of Southern California therapist's office, a computer named Ellie diagnoses post-traumatic stress disorder and depression. Patients sit in a private booth facing Ellie, and the computer makes its (her?) judgments based not on what you say but on your tone, and every detail of your facial expressions, which she captures with her camera eye.
"Contrary to popular belief, depressed people smile as many times as non-depressed people," psychologist Albert "Skip" Rizzo told NPR. "But their smiles are less robust and of less duration. It's almost like polite smiles rather than real, robust, coming from your inner-soul type of a smile."
He developed Ellie with computer scientist Louis-Philippe Morency for the military as soldiers sometimes find it hard to talk to human therapists.

Halfway around the world, officials in Dubai, United Arab Emirates' largest city, are installing "Happiness Kiosks" at popular malls where shoppers are encouraged to air their happiness, satisfaction, complaints and suggestions about civic services, the Khaleej Times reports. It's all part of an initiative to make Dubai the happiest city on Earth, officials say.
Each kiosk will be staffed with two government workers to help visitors record suggestions and complaints and forward them to a municipality call center for follow up, the newspaper reported.

In October, "Happiness Meters" were activated at 14 Dubai Municipality offices so customers could rate services and record their happiness and satisfaction on websites, apps or in person, the official Emirates News Agency said.
"Today the world is transforming very fast and people's expectations too are changing rapidly," says Sheikh Mohammed bin Rashid Al Maktoum, UAE prime minister and Dubai ruler. "The ultimate goal of all our initiatives is to make people happy and make their lives simpler."