The Universal Language of Happiness

The Live Happy team was out in full force at the United Nations’ 2nd Annual International Day of Happiness. 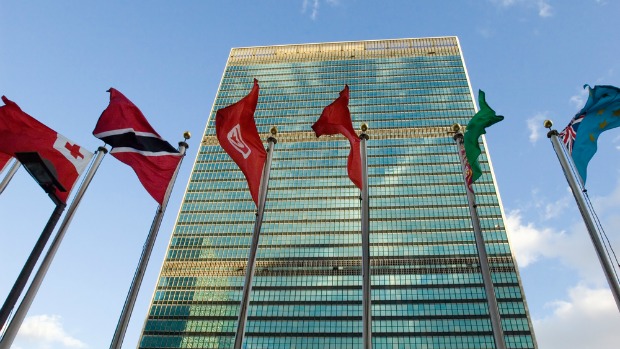 Live Happy at the U.N.

Live Happy was right at home at the U.N.’s second annual International Day of Happiness panel discussions on Thursday, March 20, held at the international headquarters in New York City.

The day, designated by the U.N. in 2012 to recognize “the relevance of happiness and wellbeing as universal goals and aspirations in the lives of human beings around the world and the 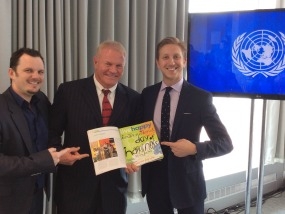 importance of their recognition in public policy,” brought together scientists, educators, historians, ambassadors, entrepreneurs and others to discuss the topic of global happiness. Many of the speakers were thought leaders whose research, ideas and ideals Live Happy calls upon to “provide the bridge between science and statistics and real life,” said Editor in Chief Karol DeWulf Nickell at the event’s luncheon. “We all have our own happiness stories.”

Many of the day’s speakers certainly had tales to tell. Former Iraq Ambassador Dr. Hamid Al Bayati shared his moving realization that although he was wrongfully imprisoned some years ago, he could find happiness in knowing he was a better person than those who had tortured him. On a lighter note, NBC news anchor Pat Battle confessed as she took the microphone that she had a run her stocking, but was choosing to be happy because she knew there were plenty of drugstores where she could buy new ones when she got back to her office at 30 Rock.

These stories represent the kind of emotional generosity that Live Happy hopes to encourage. “Most people aren’t aware of all the happiness that’s available to them,” Live Happy Founder Jeff Olson told the audience. “They don’t realize that it isn’t money or fame or relationships that will bring them happiness—but that happiness is the precursor to those things.”

Jeff said he realized that through the magazine and social media, he could create an environment for sharing happiness that would bring people together who never would have connected otherwise. 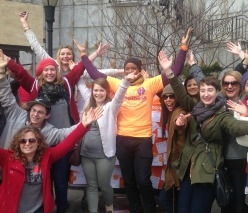 “Social media is being used to show that we can share our stories more frequently and with people we normally wouldn’t—it removes traditional barriers,” Karol said. “By posting your story of happiness, it multiplies, all because of technology.”

That philosophy melds perfectly with the sage advice with which Kamila Jacob, envoy coordinator for the Unitarian Universalist Association of Congregations, ended her own talk: “Take two minutes to sit and ask yourself: ‘What makes me feel happy?’ Then share that thought with someone else—spread your happiness! Pay it forward!”